It's been nine days, over 35 at bats, and still Yankees third baseman Alex Rodriguez sits on 599 career homers. As the 35-year old slugger looks to become the youngest player in the history of the game to hit 600 homers, it is only fitting he's stuck on 599 longer than the six who did it before him. The games most polarizing figure is yet again trying to take another proverbial monkey, off his back. This is Alex Rodriguez. You can call him A-Rod.

Heralded at one point in his career to be the power hitter that would smash his way into the record books and go down as the greatest player we'd ever seen, Alex Rodriguez is now in the same cloud of controversy that surrounded Sammy Sosa and Barry Bonds on their way to this most recent mark, 600. Eight

seasons of 40 home runs or more, nine seasons hitting .300 or higher, and now a giant shiny World Series ring wrapped around his finger, Alex Rodriguez still gets no love. Is it his public dalliances, his admitted PED use, his record setting contracts, that make him so unlikeable, so difficult to cheer for? Is it 600, 700, 800 home runs that will get him the adoration we once reserved for his talent? Maybe we never will, maybe we actually can't.

Over Rodriguez' career he has put up some of the most mind boggling stats we've ever seen. A career season average of 21 stolen bases, 42 home runs, .303 batting average, 128 RBI, 188 hits, need more?!? The two-time MVP is in the midst of one of his lower statistical seasons, a season which he's already over 100 hits and driven in 85, and still it goes unnoticed with his recent struggles to reach 600, which every reporter from coast to coast is enjoying, and every non-Yankee fan is secretly grinning watching A-Rod stuck on 599. 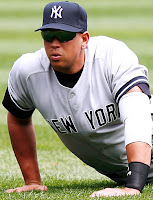 to players who could deliver those same numbers season in and season out was at it's peak, Alex Rodriguez career has been like no other. When the mask was removed from Major League Baseball, sluggers and power pitchers accused of using these PED's and cashing in on their use were on their way out. Bonds, Sosa, Clemens, McGwire, were finishing off their career and Alex Rodriguez was still searching for a World Series ring and polishing off a season which he jacked 54 homers. Playing in the largest media market in the country, Alex Rodriguez is still standing. If Rodriguez can stay healthy he'll approach the records of Bonds, Aaron, and Ruth, so 600 is not the end of the road for A-Rod. While we don't like Alex, you can't tell the story of baseball without him.