Just when it looked like a sign & trade from Toronto to Cleveland was immanent, just when Wade to his hometown Chicago Bulls was taking shape, BOOM! Not so fast. Cancel those plans in the Windy City and Cleveland be very nervous, more so than you ever have. As two of the top ten players in the NBA announced their free agency decision to head to Miami and join the Heat, this just got super interesting. Dwyane Wade and Chris Bosh are making their title contention moves and this is . . .

The decision is tougher for LeBron James. His friends Dwyane and Chris didn't make it easy for him that's a fact. With Miami's front office working quickly to surround these two in their prime superstars with role players around them, LeBron's got to wonder if his title hopes just got further and further away with yesterdays news. His choice has yet to be announced but is

certainly more difficult as of Wednesday morning. Let me simplify this for LeBron: Your friends have set up shop on South Beach and are now a very strong and viable destination for free agents, if they weren't already. The Chicago Bulls, already a playoff team, added Carlos Boozer as a last ditch effort to not get left out in the cold. Still, making themselves more legit from a basketball aspect. The Boston Celtics have re-signed both Ray Allen and Paul Pierce, those same players who knocked you out of the postseason, will try to do it again. The Knicks have even added Amare Stoudemire, as pointed you yesterday on LRN. So you say you want to head back to Cleveland?!?! As the Eastern Conference gets tougher all around him, his decision to stay home is much harder than it was when he went to bed on Tuesday night.

The Heat have become SCARY! Oh we saw what Wade can do when you put a dominating big man in his starting five. Furthermore, we saw what Chris Bosh could do when surrounded by talent during the Olympics in 2008. These two superstars are great in their own right, both have been Olympic champions, both have been studs in college

and the NBA, both have been All-Stars, and now both will be on the same team!?!?! You better call somebody. The Miami Heat have teamed their superstar guard whose averaged 26 points and nearly 7 assists per game for his entire career with a big man in Bosh who is coming off a career season. By adding a few role players, the likes of Mike Miller, an outside shooter and possibly retaining Udonis Haslem, a big man who can average a double-double a night on this team, the Heat will seriously have a core of players that won't be stopped. In what seemed like a year long decision, this duo has overnight made the Heat a candidate in the Eastern Conference and done their part in changing the landscape of this franchise for years to come.

Finally, it is about winning for some. Probably the best development over the last 24 hours, wanting to win an NBA title means alot to some players in this league, some. For Chris Bosh, a player who was stuck in Canada for the last seven seasons, it's now about winning. Passing up what we believe is close to 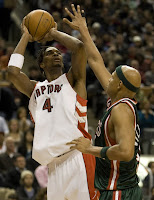 $30 million dollars by avoiding a sign and trade that could have sent him to Cleveland not knowing LeBron's plans, Chris Bosh is taking less money in an effort to win a title soon and go where he wants to go (and he gets to live on South Beach). With the ability both Wade and Bosh have, breaking the bank elsewhere was always an option, New Jersey, New York, Chicago, pretty much anywhere these two landed, they could have smashed the bank and made themselves the highest paid guys in the league, a league driven by massive egos. However, for these two players, playing together and trying to build a winning franchise while in their prime was far more important. If you saw how excited both of these men were to announce their plans, you'd know exactly what I'm referring to. Truth be told, Bosh & Wade are getting some things done in Miami, their way.

By late tonight you will know the final destination of LeBron James and the landscape will have taken it's shape, but down on South Beach, it's nothing but sizzile for now.
Posted by Lynchy at Wednesday, July 07, 2010