He's turning 28 in November. In 2005, Amare Stoudemire suffered one of the worst knee injuries a 6-10 big man can have. After microfracture knee surgery and playing just three games in the '05-'06 season, Stoudemire made his return to the league the following season scoring nearly 21 points per game and pulling 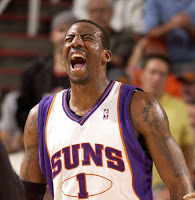 down close to 10 rebounds per. Over the next four seasons the former Phoenix Suns power forward averaged 73 games a season while sustaining the same numbers he had prior to his injury. As the first "big" chip to fall in the Summer Of 2010 Free Agent Frenzy, Amare Stoudemire is taking his game and all the question marks that come with it to the Big Apple. For $100 million dollars over five years, the New York Knicks have made the first big step toward immediately improving their chances in the Eastern Conference and a long shot bid for their first NBA Title since 1973. However, what exactly does this big move say about the Knicks and of course the free agent shuffle we've been doing for a week?

1. They aren't going to be the franchise left out. With Atlanta Hawk Joe Johnson returning to the ATL as the first MAX deal player (estimated 6 years for $120 million), both LeBron James and Dwyane Wade leaning outside the Tri-State area, and Chris Bosh as up in the air as ever, the New York Knicks came out and made a statement to and with Amare Stoudemire.

Spending the better half of two years clearing salary cap space and attempting to salvage what was left in the wake of Isiah Thomas, the Knicks weren't about to be the only team left holding the bag with nothing to show for what they'd done. Since the Amare news broke you've heard rumours of a 2011 acquisition of possible free-agent to be Carmelo Anthony, a trade bringing in Spurs veteran Tony Parker, and of course acquiring the ghost of Willis Reed to top it off. The more and more rumours swirl that Toronto could complete a sign and trade of Chris Bosh to Cleveland and possible pairings of super guard Derrick Rose and Dwyane Wade in Chicago, the Knicks looked into the magic ball and figured the best way to avoid catastrophe was to land Stoudemire and land him now. If the worst case scenario was landing a player who put up 42 points and 11 rebounds against the Lakers bigs in one game this postseason, then Jim Dolan will take it.

2. This doesn't just entice The King. As previously mentioned, what would be a better way to lure Carmelo Anthony back to the East Coast? Of course you don't want to assume Anthony would be so willing to head to New York after next season, or that he'd even avoid extending his current Denver contract this season, but Amare Stoudemire does make New

York seem all the more viable than it ever had. With plenty of room left under the salary cap and Donnie Walsh looking to add more pieces, Stoudemire isn't just the LeBron bait, he's the Knicks bait for years to come. The thing fellow free-agent Chris Bosh isn't willing to do is set up shop without knowing who will follow, Amare Stoudemire did that quicker than we'd thought. Rumoured that LeBron's people have already inquired as to what other plans could possibly be in place . . a point guard!?!? So now it lies in the Knicks brass ability to bring in the second piece, something they would be unable to do without adding Stoudemire already. The Spurs growing support of 24-year old point guard George Hill, it seems at though the Knicks hope of landing the point guard they need looks more and more likely. Hmmmm, is New York now a landing spot?!?

3. Amare Stoudemire is going to prove he can do it on his own. Overcoming multiple knee surgeries. Overcoming eye trauma that caused him another long layoff and a scary comeback. Amare Stoudemire has time and time showed his ability to comeback with renewed strength. He's been an All-Star five times, he's helped

Phoenix into the playoffs a number of seasons, Stoudemire will miss Steve Nash in Phoenix but they'll miss his power on the glass and offensive game that is second to very few. Being drafted in 2002 right out of high school Amare Stoudemire has had to prove a few things. After his eighth season in the league Amare has turned into the best player in his draft class and in the process made general managers who selected the likes of Drew Gooden and Mike Dunleavy Jr. before him look very silly. Now, embarking on his newest venture and in the biggest media market in the country, Amare will have to perform on a new level. In front of thousands of pressing cameras and media members, Amare will be under the biggest microscope and will need to rise to the occasion yet again in his career. The question now is, how will he respond?!?!

Ignoring all voices coming from Phoenix, the Knicks got their man and now it's time to react. Whose next?!?!
Posted by Lynchy at Tuesday, July 06, 2010