For the Lakers & Phil, it's about revenge, payback, and one more time to the well. For the Celtics, it's about a last stand. It's about laying claim to being one of the best teams 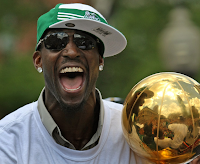 ever assembled. At nine o' clock tonight, the NBA takes center stage with the best scenario it could have dreamed up. Folks, it's Celtics v. Lakers and it don't get better than this.

Paul Pierce v. Ron Artest This time 'round, The Truth won't see the likes of Vlad Radmanovic. Rather the Lakers full tilt defensive stopper, Ron Artest. The real question is, does it matter? With the emergence of Celtic guard Rajon Rondo, not enough has been said about the equally impressive Pierce. The 11-year veteran has proven to be the only member of Big 3 (2.0) that has yet to lose a step, whose game looks oddly familiar if not better, and who has taken to big game performances like the legends numbers that hang in the rafters above him. When closing out 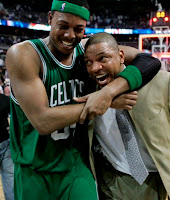 Miami in round 1, Pierce went for 21 points with seven rebounds and six assists to boot. When Cleveland needed to be stomped out, the 32-year old small forward pulled down 11 rebounds and dropped seven assists to go along with his 21 point night, pushing the Cavaliers to the brink. Then there was the Orlando Magic, who for all intents and purposes had no idea what to make of Paul Pierce. Pierce scored 81 points in the final three games of the series, including two double-doubles and went 29 for 33 from the charity stripe. If your of the mindset that Ron Artest is going to put the clamps on Pierce, just give me an example of where it's been done before in this situation? Just one. Edge: Pierce

Pau Gasol v. Kevin Garnett I'm not as quick to say Pau has an edge now that didn't exist in 2008. I'm also not going to say Kevin Garnett is the same player he was in 2008. However, with Gasol playing as he's played in this postseason, and Garnett's mileage becoming as blaring as my alarm clock, I'm more apt to agree with masses on this one. In the first two rounds of the postseason, the Lakers 7-footer amassed 8 double-doubles in 10 games. Of those games, a night which Pau ripped down 18 rebounds and only scored 9 points is not

included. Impressive. For the Celtics who have struggled on the glass during the regular season, they've continued their struggles into the postseason. If L.A. can get glass work from Pau as they did in the first two series, against similarly bad rebounding squads, Kevin Garnett and the Celtics bigs will have their hands full. All joking aside, enough about the Pau Gasol being as hard as they come two years removed from looking as soft as it gets in the '08 Finals, he's not that tough or that soft. Gasol's game will come from being able to move Garnett around in the post, just like Howard did with ease when he saw Garnett move to his side in the Eastern Conference Finals. Edge: Pau

Rajon & Ray v. Kobe & Fisher Be prepared to watch Derek Fisher v. Rajon Rondo tonight and possibly in Game 2. After that? Not a chance. Why? Because Rajon Rondo will make a living over the next 15 years off of abusing guards like the veteran Fisher. Derek Fisher is more Mo Williams than Jameer Nelson. May I remind everyone, if you haven't been reminded enough, of what Rajon Rondo is capable of against slower guards who can't keep up. Rondo has dished out more than 10 assists eight times this postseason, he's scored over 20 points five times, and he's had an 18 rebound night, from a 6-1 guard.

Does anyone Kobe Bryant isn't going to man-up Rondo after one of his mind numbing nights? That being said, it'll be up to Rajon Rondo to find Ray Allen early and often once Kobe leaves him to cover Rondo. No player in this finals stretches a lead like Ray Allen, who when he's hitting shots, is second to no one. All of that being said, are we going to see the killer instinct Kobe that we saw in the Western Conference Finals? Are we going to see the player who went off for 30+ points in 10 of the Lakers last 11 playoff games? Who abused Utah, ushered out Phoenix, is that Kobe Bryant more than Boston's famed defense can handle? Is Kobe Bryant really going to let fans of these Celtics say, "You never beat us." Edge: Kobe

Phil v. Doc Doc Rivers has successfully done more in a three year span than most coaches do in 30 NBA seasons. Already wearing one giant diamond encrusted shamrock on his ring finger, Doc Rivers is preparing to etch his name into Celtic lore for the next 50 years. Rivers has managed to tame an emerging superstar point guard in Rajon Rondo, a player who'd hands down run 25 teams in this league on his own. Rivers has been able to pull the

reigns on Rondo and allow his aging superstar teammates to follow him on their terms, not his. What Doc did with Nate Robinson proves the point, he got buy-in, something rarely seen on the pro-level and more fit to collegiate basketball. Why has Doc Rivers been able to get more out of players like Glen Davis, James Posey, Eddie House, Nate Robinson, and even Rasheed Wallace over this three-year stretch, because they love playing for him. As for Phil Jackson, he's always been a front-runner as a head coach in this league, from running with The Bulls, to the Shaq & Kobe Lakers, and now with the toughest player in the league running his show, when has Phil had to out coach the man across the table? With plenty more rings than any coach this side of Red Auerbach, Phil Jackson may have just met his coaching match, Doc Rivers. Ask Stan Van how that tasted? Edge: Rivers

Am I a homer? The answer is yes. Fortunately for me, it works in this town. This series has more promise than that of any NBA Finals since Karl & John v. Michael & Scottie. Kobe Bryant looking to add the Celtics to his hit list. Phil Jackson looking to avenge his 2008 Finals loss. Doc Rivers possibly looming a retirement while going out on top. Paul Pierce looking for an NBA Finals MVP for the second time, a vaunt into the greatest Celtics of all time. Kevin Garnett and Ray Allen looking to pull on another ring and add to their Boston legacy. Banner 18 or Banner 16. Edge: Celtics in 6
Posted by Lynchy at Thursday, June 03, 2010