Disclaimer: Throughout the history of this blog I've made a significant effort at having an unbiased opinion, really I have. Earlier this season I went so far as to call out these Boston Celtics (Green With Little Envy). That being said, after Sunday nights impressive performance from Paul Pierce & the Celtics, the cuffs are off and anything goes.

With the season on the proverbial line for the second straight game, the Celtics moved all their chips into the middle of the table and showed their hand. Boarding a plane bound for the west coast and game six, possibly seven, the team that captured New England during the summer of 2008 is once again in the very same position to do so. Some of the pieces have changed, but most remain the same and while it's been quite a long strange trip, it couldn't be more exciting. As previously mentioned we could still bear witness to as many as two more games, at this point however I'm not to sure I can handle it. the Celtics 2008 Finals. After this game the naysayers were out in full force, this team is old, slow, and too rough around the edges to get back where they were. As most of the country responded with criticism and doubt that the Celtics could dispatch Miami in game 2 while Garnett was sidelined with the suspension, that locker room wasn't buying it. Serving as a wake up call to Boston, the short handed Celtics came out and rocked Miami to the tune of a near 30 point victory. Bell answered. In just five games Dwyane Wade's Miami Heat would have their bags packed and headed home, season over. So much for a first round upset from the number five seed, the Boston Celtics were waiting for LeBron in round two.

May 3rd Just two days from losing game 1 to the Cleveland Cavaliers, a game the Celtics had all but dominated for the better half of three quarters, Boston defeated LeBron James and company to knot the series up headed back to Massachusetts. Led

by a 19 assist performance from super guard Rajon Rondo, the Celtics shook the Cavaliers at their core by handing them an 18-point loss. For the first time in the postseason, the Cavaliers who had the best record during the regular season seemed more than just rattled. The Celts had gone into their house, a house which saw them lose just six games in the regular season, and almost dropped them not just the one time but twice. As in the case of the Celtics, it was more than just a series tying victory. For the first time since joining the Celtics last summer, 14-year veteran Rasheed Wallace showed up. In 18 minutes Wallace began to show Celtics diehards why he was an important signing eight months earlier. Scoring 17 points and playing tough defense on the other end of the floor, Rasheed Wallace answered the call from his future Hall Of Fame teammates.

May 11th After an embarrassing game three loss on their home court, 124-95, the Celtics had to come back and even the series in game four just to guarantee a trip home for game six. In the middle, an all-important game 5 back in Cleveland on May the 11th. Both teams looking to avoid being pushed to the brink, the Celtics would have to do so in rough waters away from their friendly confines. Knowing they'd done so before, behind great bench play from Glen Davis and some sharp shooting from Ray Allen, the Boston Celtics showed no fear of the road. In Cleveland's worse playoff loss in the history

of their franchise, the Boston Celtics would run away with a 32-point victory all but sealing the fate of LeBron James and his hopes to bring a coveted championship back to his home state of Ohio. From Ray Allen's 6-three pointers to Paul Pierce's 10 defensive rebounds, and can't forget Big Baby's 15 points in 21 minutes, the Celtics steam rolled an unsuspecting Cavaliers team that folded it in quicker than it came out. If there was any tougher way for LeBron to play his potentially last series in a Cavs uniform, I'd be interested to hear your theories. The championship swagger was back and after finishing off Cleveland in six and headed to the ECF, what else was left to do but celebrate with these Celtics.

May 18th Claiming home court in game one, the Celtics faced a game two opportunity against the Orlando Magic to seize control over the Eastern Conference Finals. Behind 53 combined points from Celtics stars Rajon Rondo and Paul Pierce the Celtics would hold onto a late lead and take the first two games of this series while on the road. 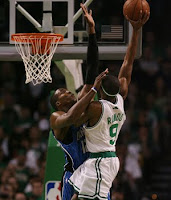 In the midst of a mini-run that would consist of six straight post season wins the Celtics couldn't have looked stronger. It'd take two more games than the Celtics would have liked to finish off Orlando, a team they'd been up 3-0 against, but in the final game, game six, the Celtics would come out and polish them off like they had each of the previous two opponents. Still, we'd have to go back to May 18th to see the pivotal game in which Boston put the clamps on Orlando and significantly dug them a hole that made it all but impossible to get out of for Dwight Howard and company. When Celtics head coach Doc Rivers needs that victory he leaves it in the hands of Pierce and Rondo, in game two of this Orlando series Rivers turned to his stars the only two to play 40 minutes or more and allowed them to take over. As the power shifts toward Rondo in Boston, Paul Pierce is still the player to turn to in crunch time, and Orlando just didn't have anyone to contain him.

June 6th With Kobe Bryant being held to limited minutes due to foul trouble, someone on the Celtics had to take advantage being down one game to none. That someone was Ray Allen. Putting his stamp on the NBA Finals, the game two star would drill seven

three pointers in the first half en route to setting an NBA playoff record with eight three pointers in the game. If the Celtics were going to even up the series they'd need every one of Allen's game high 32 points and then some. The second half would once again belong to super guard Rajon Rondo who would record yet another triple-double in this postseason. Pulling down 12 rebounds and dropping 10 dimes to go along with his 19 points would give the Celtics that win they so desperately needed to go home with home court. With Lakers big men Andrew Bynum and Pau Gasol chipping in 46 points the Celtics were able to withstand with their fantastic guard play. An NBA series doesn't begin till the home team loses and in game two this series got under way. If you thought L.A. was just better you had another thing coming.

June 10th Why were Celtics bench players Nate Robinson and Glen Davis at the podium after this game? Down two heading into the fourth quarter with the starters getting some rest for the stretch run, the Celtics bench would come out and lead an

attack that would end up outscoring the Lakers in the fourth quarter by nine points. Led by the self proclaimed 'Shrek & Donkey' the Celtics starters would rest while watching Glen Davis impose will pulling down five rebounds and forcing in 18 points. Backup guard Nate Robinson would make his presence felt for the second time in these playoffs twelve bench points. As many have said at this point, Doc Rivers was comfortable leaving the bench in while they were playing so well. The bench got the crowd on their side and were clearly being fueled by the fans. Every NBA Finals gives you something you didn't expect, game four was exactly that. Knotting up the series and avoiding a 3-1 deficit, the Celtics bench stepped up and did exactly what they needed to, light a monstrous spark.

June 13th (Last night) Knowing a loss would mean they'd face back-to-back must win road games if they planned on raising Banner 18, the Celtics avoided heading to the west coast down in this series. Game 5 would watch Kobe Bryant

have an amazing second half and even more amazing third quarter in which he scored a mind bending 19 points. How did the Celtics win a game in which Kobe recorded nearly 40 points? The Truth. Equally impressive was the 27 point performance from Paul Pierce. Pierce time and again made tough shot in that third quarter to withstand the onslaught from Bryant. Abusing Ron Artest for the first time in this series, and when the Celts needed it most. Both Kevin Garnett and Rajon Rondo would do their part, each adding 18 points, pulling down 10 boards for Garnett and adding 8 assists from Rondo, taking advantage of the night Pierce was having. As the Lakers closed in late the Celtics were able to avoid a fate they'd seen so many times in the regular season with a fourth quarter lead evaporating. We're headed back to L.A. and will have to win yet again in California if they plan on taking this.

The Boston Celtics could very well lose both games in L.A. this week and fail to win the franchises 18th World Championship, but at the beginning of this postseason not many believers thought they'd even be in the position to close it out with just one more victory. Amazing considering this starting five has never lost a playoff series, something Celtics coach Doc Rivers has reminded us of time and again.
Posted by Lynchy at Monday, June 14, 2010