I Need A Cigarette

After one of the most stressful first weeks of any NBA Finals I can remember, I'm prepared to deliver. Through three games, almost 160 fouls called, and a 2-1 Lakers series lead, the NBA Finals has got me in need of a cigarette. Throwing on my zebra colored jersey and taking The Finals to task . . .

1. I want to see the superstars on the court. Game 1, Ray Allen saddled with early fouls and held to playing just 27 minutes. Game 2, Kevin Garnett records 5 fouls and is contained to just 24 minutes while Kobe Bryant does the same and plays just 34

minutes. Game 3, Paul Pierce plays just 34 minutes picking up 5 fouls in the process. "Hey, David Stern! You watching this?" The best way to promote the game in the NBA Finals is not to have the casual fan sit through 10-15 minutes a game from the likes of Luke Walton, Michael Finley, Sheldon Williams, and Jordan Farmar? The Staples fans must have loved seeing Kobe with a towel over his head for 14 minutes, just about as much as the TD Garden fans sat through 20 minutes of Tony Allen with Pierce without a drop of sweat on the bench. Anyone else curious why four future Hall Of Famers with a bundle of championship rings have built up zero respect from the league? This has got to be the biggest atrocity of these NBA Finals.

2. Someone explain the 2-3-2 format to me. The first three rounds of the NBA postseason are designed 2-2-1-1-1. However, when you get to The Finals, we change it up. Figure that one out. The Lakers are forced to play three consecutive games in Boston. The Celtics don't get a chance to 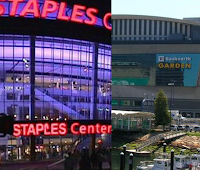 play pivotal, potentially closing games six or seven at home, where they would in any other round. Home court advantage in the first three rounds give you the benefit of playing game 7 in your backyard. In the finals you get both games six and seven as home court advantage. In a sense, all the team who holds home court has to do is win two of the first five games and you still have an advantage. As currently standing, what do the Lakers really have to do over the next two games in Boston? They won't return to TD Garden if they lose both. In an age where people take private jets from Chicago to New York for a 12:00 PM meeting and land back at O'Hare by dinner time, can the Lakers and Celtics really not travel cross country with a day rest in between and play again? Really?

3. What's the purpose of the final two minutes instant replay? Three times in the final minutes of game 3 the refs went to the scorers table to review an out of bounds call to find out who should have possession. Now I get that the NBA is attempting

to make the right call and not have an error decide the winner, but what about the other 46 minutes of play, is it okay to make the wrong call then? Or how about the fouls which you can't review to find out if that's actually what happened? Is that allowed? Is the judgement of an official with a bad view from his position making the call not the same as an out of bounds error call? I'm not saying make the game longer, I'm saying what's the point of a review in the final two minutes if your not going to the rest of the game? When these games are decided by possessions, by last shots, by crucial plays which determine history, is it only the final two minutes which are important enough? But no, NBA basketball isn't dying and the fans aren't turning away in droves.

4. All in favor of the road team getting no intro music or dimmed lights. Both in L.A. and in Boston, the organizations game both dimmed lights and a small music intro to the road team. I say, hell with that! Whatever happened to the day where the road team being introduced was a mere afterthought. During Michael's championship seasons and what can be considered as the dawn of the titan tron, the opposing team got nothing! Yet now we allow that same titan tron to drown out the sound of the crowd booing from the very top of the rafters? Can't handle it, nope needs to stop and I'm calling a foul on it!

5. Flopping is an issue in the NBA Finals, it's embarrassing in slow motion. Between Lakers guard Derek Fisher, Celtic Glen Davis, and a slew of other players, I'm tired of flopping. I don't blame these guys

though, because refs love making that call at every age level in every league, they love firing the offensive foul and pointing to the other end as the crowd errupts. Here's the thing though, it's not just the offensive foul it's the faking like you got hit as your man blows past you, it's the acting like you got plugged with an elbow after a rebound, give me a break fellas! What ever happened to moving your feet and playing defense? Come on, if I have to see another game plan aimed at not running an actual offense and just getting a guy in foul trouble I'm going to puke!

6. Cool it with the M-V-P chant in both cities, it's overdone and lame. Who cares who the NBA Finals MVP is? Seriously people. Kobe Bryant isn't playing as well as Pau Gasol, so Laker fans stop chanting it as he goes to the free throw line for another touch foul free throw. Furthermore, we're three games into this series, no player has played well enough in clutch time to have them lock up this trophy yet, so cool it with the "M-V-P, M-V-P" chants, it's tired. Every un-original fan loves doing this, but I ask you to please refrain it's pathetic. To take it one step further, the only M-V-P people should care about is the actual MVP who is at home right now. God Damn!