About All I Could Handle

It's Friday Morning. Looks to be somewhat sunny out. Can definitely hear some birds chirping. Note to sports crazed self: Life isn't all that bad, but today it for sure sucks.

When the final buzzer sounded and Kobe Bryant's Los Angeles Lakers recorded their franchises 16th NBA Championship I was visibly shook. At the expense of the Boston Celtics who just completed their three-year restoration of basketball in The Hub, the L.A. Lakers are back-to-back champions. That's about all the Lakers talk your getting, I'm taking a different, more bias road.

The year, 2007. With a record of 24-58 through the regular season, the Boston Celtics were primed for a very high lottery pick. Theirs, the second worst record in the Association placed them in perfect position to earn 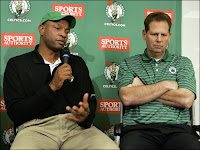 a top pick in one of the most promising drafts of recent memory. Then May 22nd, 2007 happened. The Celtics, with a 19% chance of winning the rights to the number one overall pick, and a 34% chance at winning one of the top two selections, their future would be altered quicker than we could have ever imagined.

Turns out the Boston Celtics didn't get either, they didn't get the third, or fourth pick, but NUMBER 5! However, three years removed from that night, the Boston Celtics have won nearly sixty games a season, raised another banner to the rafters, slammed the door on the coronation of LeBron James not once but twice, been to two NBA Finals, and pumped more life into a hoops starved region of the country than any draft pick would have done. So yes, we're all winners on this lowly Friday morning, no amount of LA-LA Land celebrations are going to get this cat down. It may not be over but I've got a couple Thank Yous to give out, call them preemptive, call them too early, but I'm doing it . . .

Thank You, Celtics Team President Danny Ainge Not to many people in this league would have known what to do when you were staring at drafting the likes of Yi-Jianlian. What did Ainge do? (1) Sent the rights to his draft selection, an expiring contract named Szczerbiak and Delonte West to the Sonics (now the Thunder), in exchange for one of the hardest working shooters 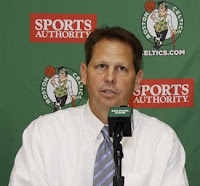 in this league, Ray Allen, and the #35 pick which would result in the drafting of this kid from LSU, a Big Baby from LSU. (2) It took weeks, five-players, two first round picks, and cash included for the Boston Celtics to land the future Hall Of Famer referred to as, The Big Ticket, Kevin Garnett. Aside from the countless additions to help out his star players over the last several years, Ainge has added the likes of Rasheed Wallace, P.J. Brown, James Posey, and Nate Robinson to name a few. It was Ainge who traded for our current stud point guard Rajon Rondo in 2006. Danny Ainge, we owe you a huge thank you for bringing these stars to Boston and making us relevant once more. You put the pieces together, Thank You!

Thank You, Celtics Head Coach Doc Rivers Here's a head coach who was fully on the chopping block, laying flat out on the thing after the Celtics horrible losing season of 2006-2007. Given the players from the front office, and the confidence from them as well, Doc Rivers built buy 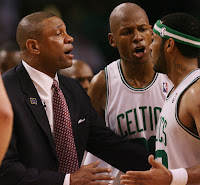 in from every one of his All-Stars. He got more out of an undersized Glen Davis, he turned Nate Robinson into a jolting bench player, and that was all just this season. Putting up with Rasheed Wallace for an entire year, playing as if he had no care at all during the regular season. Managing the young up and coming Rajon Rondo, battling with his veteran teammates, Doc Rivers got it all of out of every one of them. Out coached Phil Jackson in the 2008 NBA Finals, developed a game plan to stop the explosive Cleveland Cavaliers, Doc Rivers has etched his name into the history books. Could Doc be the best coach of the green since Red?!? For the job that Doc Rivers has done coaching the Celtics to 18 wins shy of 200 in just three seasons? Thank You Doc! An even special Thank You if this is your last season at the helm.

Thank You, Kevin Garnett & Ray Allen First off, Garnett. I've never seen a player with as much passion and toughness as Garnett. A title was all Garnett wanted to play for, not money, advertisements, fame, just an NBA 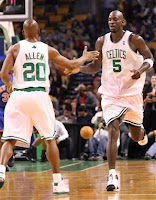 Championship. The chest pounding, the floor slapping, for three seasons I've had the pleasure of seeing a a player like this and I couldn't want more. Garnett put aside the rumours he'd heard about Boston, it's negativity to say the least. Kevin Garnett in Minnesota was just an All-Star, in Massachusetts, he's grown into a legend and we should all Thank him for that. Ray Allen, the smoothest jump shot I've ever seen. His second tour in the Northeast, first being in college at Connecticut, would not only net him a championship, but I believe it'd allow him the opportunity to play in front of some of the most thundering crowds he's ever seen. Winning games from behind the three-point line, hounding Kobe Bryant in more than one NBA Finals, and more importantly running circles around defenders for the better part of three seasons. As much as Boston was good for their careers, their careers were amazing for us, Thank You Ray and Kevin!

Finally, Paul Pierce. Thank you. Despite what people say about your acting, your game, about anything else they'd like to, Paul Pierce is a living Celtic legend. Multiple NBA Finals, game winning shots, Paul Pierce is going to end

his career not just in a Celtics uniform but as one of if not the leading scorer in Celtic history, a history that is long and storied. Through great now times now, and bad times before, Paul Pierce was a gamer. I'll remember his performance against those New Jersey Nets in 2002, against the Lakers in the '08 Finals, always. What I will remember most though, is the fact that he wanted to be a Celtics, he knew what it meant, when it needed to be said he said it. For his entire career in uniform, Paul Pierce stood up the challenge of being compared to the greats that came before him. I can't thank Pierce enough, led through the bad times and came out on the right end. The time has come to just say Thank You, and hope he doesn't leave us now that it's his choice. Thanks Truth!

Whether this is the end of the road for this team or not, as sad as that sounds, they put together a three year stretch we never saw coming in the spring of 2007 waiting on a hope and a Durant. Thank You to these Celtics, I'm greatful.
Posted by Lynchy at Friday, June 18, 2010