That Was What You Got Hyped For?!?

For two weeks the LynchyRightNow readers have been clamoring for some Fifa World Cup talk. After running screaming out of my the RightNow sanctuary to make sure I was in the country that witnesses October Classics, the Kentucky Derby, and the god damn Super Bowl every calender year, I'm calm and ready to give you something. (I use that term loosely.)

Before I get going, and I will, let's make a few things clear:

1. I'm not a hockey fan, but we've been in the midst of the Stanley Cup Finals for the better half of two months. If you sent me an e-mail asking about U.S. keeper Tim Howard and I didn't respond, it's for a reason. In America if you stand in front of a net, your a goalie or Misty May-Treanor.

2. The Boston Celtics, my Boston Celtics, have been working their way towards Banner 18 since late April. If you e-mailed me looking for a little Brazil v. Portugal back and forth, the Lakers and Celtics are duking it out for the NBA Finals right now. That's a matchup of epic proportions.

3. The 1919 Chicago Black Sox throwing the World Series. The 1994players union lockout causing play stoppage for the fourth time in twenty-three seasons. Twenty plus seasons of performance enhancing drug use throughout an entire professional baseball system. Still ticking. If you e-mailed me about soccer growing in America after this tournament, there is a reason I didn't respond. You & I know what we appreciate more.

Now that I've got that off my chest. These are my thoughts about what The World Wide Leader slammed down my throat for the past six months with everyone from Bono to that guy in Blood Diamond.

The most intriguing thing about the epic buildup of England v. The United States was that I just didn't care. I'm a bit to young to remember the Revolutionary War (circa. 1775) If I did, 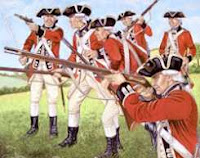 I'd be a bit more jacked up to face the Red Coats. Sure the matchup may have taken quite a different tone if we were playing say the Soviets or Vietnam, but for me, I think of the English as allies who are years behind the U.S. in dental hygiene.

Has there ever been a better name for an American villian than Clint Dempsey?!? He gets my vote to take the World Cup by storm even if I couldn't tell you what position he played or how old he is. I hope he does some crazy 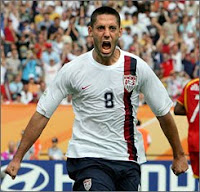 stunts that get the South African crowds all fired up. I'm thinking some throat slashing gestures, crotch chops, and even a double middle-finger salute after leaving the pitch! Come on Clint, make this World Cup into a future movie about you titled Villian Abroad: How Clint Dempesey led the American to the dominance.

Soccer fans in other countries take this sort of thing more serious than 'hockey dads,' do in America. You know, those dad's who kick other parents in the face or take their kids coach out behind the rink, that kind of crazy is dwarfed by soccer fans.

If you don't have your countries flag painted on your face, spit dribbling down your chin, or a crazy hat that makes the 'Derby women look normal, then you just aren't doing it right. During Saturday's England v. U.S. matchup, the camera panned over twenty-thousand people with one or all of these things I've described. Makes you think twice about going to a soccer game in England, a second thought that would lead me to staying in from the comfort of my hotel room with a stocked mini bar if I was abroad.

I can't fathom a athletic event that I care about ending in a tie. [Insert joke about ties being like kissing your sister here] To watch some 90 minutes of a sport and have all things equal at the end? What the hell is that sh*t?!?!? At least in the Hockey postseason they finish the games, on

soccers biggest stage, ties are not only allowed but you get points for them. Riiiight, and you wonder why uber competitive Americans can never get behind this thing.

As a wise friend said to me prior to busting out this column, we've got to root for South Africa, at least that way Matt Damon and Morgan Freeman can begin shooting on Invictus II: Apartheid Out.
Posted by Lynchy at Saturday, June 12, 2010