You Asked, I Answered.

I've decided to entertain the readers by answering some Mock Draft questions they've been writing in. If I didn't get to your question, it's because I started hitting delete way before your e-mail was read. As always, my apologies.

In short? It doesn't fall. Raji's hype is for real, he's the hands down, #1 defensive tackle prospect in this year's draft class. No other defensive tackle's name has even been uttered near Raji's. The teams that are rumored to take the Boston College defensive tackle wouldn't pass on him even if these rumours were true: Oakland - Al Davis wouldn't care, in fact he'd probably encourage behavior outside the lines, Green Bay - Finished 26th in the league against the run, not in the position to argue how a guy gets it done, San Francisco - Mike Singletary is capable of helping any of his players with character issues, if B.J. needs to be pointed in the right direction, the 49ers can do that. Raji should still go in the top ten and I'd be surprised if he slips past any of these three teams.

Why is Mark Sanchez a better NFL prospect, but the top pick overall will be Matthew Stafford of Georgia?

Greg Oden was drafted ahead of Kevin Durant. Even though it's the NBA, the premise stays the same. Despite fantastic workouts and a great Pro Day at Southern California, Mark Sanchez won't be drafted in the top slot because of what Matthew Stafford can be, not what he is. Sanchez is

probably more mature, a little more athletic, but he's got some red flags. For starters, he didn't get the full endorsement of his college coach, Pete Carroll, till a few weeks after the process began. That's important to these NFL teams looking to draft Sanchez, they realize he's an underclassman whose only started 16 games on a team which is more physically imposing than 99.9% of college football programs. As good as Matt Leinart was, you have to look at what the sum of the parts did for him, and I think teams especially the Lions recognize that. Matt Stafford on the other hand, is a young kid whose started from day 1 in Athens. 34 games in three years at Georgia, he's a big passer who can take a lick, major arm, and that's all you need. The Lions have to draft the quarterback with the best potential, and that's probably Matthew Stafford. (Or at least I'm convincing myself it is)

Would the New England Patriots actually select a non-linebacker in Round 1 at pick #23?

They could, but I doubt it. Here's the thing with the Patriots, they are innovative that can't be disputed, but they do have serious holes to fill, especially at linebacker. Rey Maualuga, Brian Cushing, Clay Matthews, Aaron Maybin, and of course Aaron Curry, make this a deep draft of linebackers and if one of those top prospects 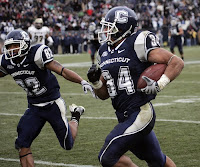 is available, the Patriots would be hard pressed to pass them up. However, if the Patriots do decide to go in another direction with the 23rd pick, it'll be to add depth. One position the Patriots could add depth to, running back. Both top backs in this draft, Knowshown Moreno and Chris Wells, should be off the board by twenty-three. The next back on the big board should be Connecticut's Donald Brown. During his junior season in Storrs, Donald Brown rushed for 2,083 yards including ten 100+ yard rushing games. Pick twenty-three may be a bit early for the Brown but if he fits what the Patriots want, they should get him because he may not be there at pick #34. Let's face it, Fred Taylor is 33 years old, Kevin Faulk is 32, and Laurence Maroney has missed 18 games over the last three seasons, the Patriots need a solution in the backfield. Donald Brown fits, he's quick, tough, and can make big plays. This type of move is exactly what the Patriots do, so I can see it.

Any read on a guy in the second or third round who draft experts are sleeping on?

Yes, but I don't know if the experts are 'sleeping' on him. Buckeye wide receiver, Brian Robiskie. In a year when there are receivers a plenty, Crabtree, Nicks, Heyward-Bey, Britt, and Percy Harvin, Brian Robiskie is sliding

somewhat under the radar. At 6-3, Robiskie is a big target. Like another former Buckeye, Anthony Gonzalez, Robiskie can become an exceptional offensive weapon in the right offense. His father is a former NFL player and it has given the younger Robiskie a great knowledge of the game and the ability to transition to the NFL quicker. After top wide out prospect, Michael Crabtree, all the other receivers have question marks surrounding them. Where does Percy Harvin fit? Is Rutgers' Kenny Britt worth first round dollars? Both Nicks & Heyward-Bey aren't entirely reliable and have had issues as far as consistency. Brian Robiskie is very NFL ready and he may be a guy you could steal in the second round that would come out and really produce from his first snap on the football field.

Among your top selections in your March 19th Mock Draft, who is most likely to be a bust? A.K.A. Vernon Gholstonesque?

If I had to pick a bust, absolutely had to, it'd be the Florida State defensive end, Everette Brown. Mainly because he's extremely undersized at

his position. He's been measured as small as 6'1" which is a huge difference from the 6'4" he was measured at while in Tallahassee. At Florida State Brown did have some big games, three sacks against the likes of Virginia Tech and Clemson. However, he did have games where he seemed non-existent; No sacks against Boston College, Florida, Georgia Tech, and Miami. It seems as though he is over matched at times or all together just disappears. Brown isn't a bad play and he may very well turn out to be something similiar to the Colts Dwight Freeney, close in height and equally fast off the edge. If I had to pick a bust, it'd be Brown because of his size.

Thank you for all the input, and stay tuned for more NFL draft specials leading up to April the 25th. . . .
Posted by Lynchy at Thursday, April 09, 2009