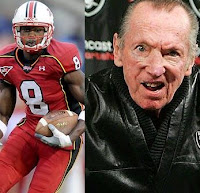 Crabtree, Hakeem Nicks (a fellow ACC wideout) or Jeremy Maclin. Why? Because all of those guys had more than 1,000 yards receiving and scored more than 10 touchdowns in 2008, two things Heyward-Bey didn't do. You know how crazy this pick is? No really, it's absurd. What!?!? You want to argue with me Oakland fans? Maybe Al wanted a versatile player, maybe he wants to use Heyward-Bey in the return game. Sure, use a guy in the return game whose never returned kicks in two years at Maryland. Jeremy Maclin, the wideout from Missouri, would have been too high at #7 as well, but at least I'd get that. Maclin has over 1,000 yards each of the last two years in kick returns, and another 250+ yards per year returning punts! Picking Heyward-Bey at #7 wasn't even the craziest thing Al did that day. After the hoards of Raiders fans cheered the pick (which could be another column on its' own) Al used his second round pick on a safety from Ohio, whom every expert had on their board in the 4th and 5th rounds. This guy is out of his mind, hey I have no problem taking my grandmothers license away after she runs over a lady in the super market parking lot, Commissioner Goodell maybe it's time we take Al's license away, before he ruins anymore careers.

Clearly Josh McDaniels and the Broncos have a plan, we just don't know if it'll work yet. Some good defensive talents on the board at #12, Larry English, Brian Orakpo, Robert Ayers, Peria Jerry, but the Denver Broncos give us the first running back off the board, Georgia's Knowshon Moreno. Now the Broncos did just sign veterans Correll Buckhalter and LaMont Jordan(a former Patriot) 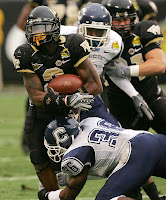 and now they've added a top NFL prospect Knowshon Moreno. Jordan and Buckhalter both serve that mold of catching out of the backfield and being able to take the ball the distance, so does Moreno. The Broncos go for a great talent, but they have other needs. They follow that head scratcher by drafting Robert Ayers at #18, a strong final year at Tennessee really elevated this defensive end / linebacker, he's another of those hybrid defensive players. Ayers should help this defense get to the quarterback and shake things up in the AFC West. A pick I really liked came next by trading up and selecting Alphonso Smith from Wake Forest early in the second round. If your a Broncos fan you'll love this guy. For starters he's got a nose for the ball and can find it all over the field, not to mention he's one of top ten corners in career interceptions in NCAA history. It's safe to say that McDaniels is most likely the closest thing we're going to get to being "Belichick-ian" he's brash, cocky, and gets done what he wants done . . .

While we're on Belichick:

Their pick of linebackers were still available, Laurinaitis, Matthews, Maualuga, and Sintim. They want to grab some offensive line help for down the road, Michael Oher was still on the board. Top corners, Vontae Davis, Alphonso Smith, and Louis Delmas, all still available for a team that clearly needs help at cornerback. None of that matters to New England though . . . they'll do as they want. Baltimore expresses interest in Michael Oher so the Patriots give them their pick and move back to 26th also acquiring another 5th round pick. The Packers see linebacker Clay Matthews falling to New England, so they offer up three picks including the 41st overall to the Pats to get back into the first round. Patriots are officially out of the first round and have added two more picks that they didn't have at the beginning of Day 1. Finally at pick #34 (a pick acquired by dealing Matt Cassel to the Chiefs), the Patriots address their safety needs and select Patrick Chung, safety out of

Oregon. Chung is fierce and a hard hitter, this replaces Rodney Harrison. Six picks later, the Patriots are lined up with the 40th pick by sending their 47th pick and two others to Oakland. Subsequently giving the Patriots two picks back to back, 40th and 41st. With the 40th pick the Patriots send notice to Vince Wilfork, selecting Boston College defensive tackle Ron Brace. If Wilfork believes he's about to hold the Patriots hostage for a big pay day, not so fast. Brace will work great in a Belichick defense and has the ability to be just as big in the National Football League as his counterpart drafted 9th, B.J. Raji. Chung at safety, Brace on the interior, and then Belichick gets the guy he originally wanted, cornerback from Connecticut, Darius Butler. Not so fast, the Patriots weren't done yet. Their 4th pick in the second round was to add a project in 6'7" manchild, offensive tackle Sebastian Vollmer. Who has done more work this offseason than the Patriots? Honestly, put your money on the Pats this season because if half of their moves are mistakes they're still in business.

If you wanted massive talents, you got them Green Bay. Ted Thompson and the Packers gave the cheesehead faithful a everything they wanted and some. Adding stud defensive tackle B.J. Raji early in the first round and being able to trade back in late to add Clay Matthews gives the Packers two playmakers on a defense that they missed in 2008. Two of the top defenses in the country last 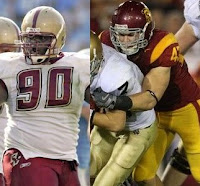 college football season were that of Southern California and yes, Boston College. Those two defenses were littered with top echelon talent so it'll be a challenge for Raji and Matthews without those guys around them but they still are being added to a defense with talent. Linebackers A.J. Hawk and Nick Barnett must be excited about the possibility of Raji being able to free them to roam and make big tackles. Dom Campers has got to be the happiest man in Wisconsin today, the Packers came into this draft looking to do two things on defense: (1) Find a defensive tackle who can stuff the middle of the running lanes, mission accomplished. (2) Acquire an outside linebacker who can help out in coverage and also rush the passer, mission accomplished. While their secondary seems to be aging as well the Packers have gone out and addressed their getting to the quarterback issue, 2009 should be a good year for Cheesehead Nation.

In Sanchez, you trust. They'll be no learning behind a veteran, they'll be no waiting in obscurity, they'll be no trying to lead an 0-16 team back from the dead, not for Mark Sanchez anyway. The New York Jets put their eggs happily in one basket on Draft Day. A year after courting Brett Favre's retirement tour, the Jets traded their former head coach Eric Mangini, their 1st and

2nd round picks, as well as three other former players of Eric Mangini's, in exchange for the 5th pick which they used on USC's signal caller, Mark Sanchez. I'm not as high on Sanchez as other people, I'm not as low on Stafford as other people, but I guess the Jets are going for something here. I'm not sure what they are, but they're going for something. Here's the thing with the Jets, the Bills, Patriots, and Dolphins are all getting better, but only one of them has an actual quarterback. If Sanchez can do anything, the Jets may be in business, I don't know if this is too much to give up, I think it is, but I just don't know. For Sanchez, he won't get the luxury of sitting behind a Matt Hasselbeck or even a David Gsrrard, he won't have the luxury of playing in places like Seattle and Jacksonville, clearly different from playing in the Big Apple. I'm down with him being able to handle the pressure, that's no problem for these Southern Cal. kids, but he's got to come in and play from day one. GOOD LUCK!
Posted by Lynchy at Sunday, April 26, 2009