Back To Bite You

Consider the 24-hour non stop NFL draft discussions on ESPN as the your Thanksgiving dinner. Consider my 2009 NFL draft recap as the turkey sandwich a day later.

I don't bother grading all 32 teams, we really don't know what players are a hit for at least a couple years. No one hyped the Patriots for drafting Tom Brady late in the second day, and at one point Vince Young was the best selection of the 2006 draft, now he's a backup at best. Some quick winners & losers of the '09 NFL Draft and then I'll blow off some steam:

Atlanta Falcons You have to consider everything the Falcons did last week not just during the actual draft. Trading a future (2010) second round pick to the Kansas City Chiefs in exchange for literally a perennial pro bowl tight end may be the biggest trade since Randy Moss left Oakland for a bag of donuts. The Falcons removed themselves from the Brandon Pettigrew sweepstakes and were determined to improve on their 24th ranked defense of 2008. Atlanta started the draft by selecting Peria Jerry in round 1, the first of seven defensive players the Falcons would add through the draft. Lawrence Sidbury of Richmond provides more depth on the defensive line for Atlanta and will hopefully make an instant impact on their pass rush. It should could as to no surprise that GM Thomas Dimitroff had a plan and executed it to perfection.

New York Jets Build up your defense, find a running game, don't expect your quarterback to throw the ball 30-40 times a game. That's the way to execute with a rookie quarterback. That is the plan that Rex Ryan has as new head coach of the Jets. The Ravens didn't ask Joe Flacco to go out and win games, the Falcons waited till Matt Ryan was ready to take the reigns, then he did so. By going up and getting your target, the Jets did everything they wanted and needed to do. When Mark Sanchez is ready, he's going to win games for the New York Jets, until then expect their defense and rushing attack to keep them alive. The Iowa RB Shonn Greene is a smart pick up for the Jets, they do need help in the backfield especially if they plan to base their attack around the rushing game. You have to like the trade and subsequent pick, even if you hate all things New York.

Baltimore Ravens The Ravens could have done some things here. I wanted to see them draft a big wide receiver for Joe Flacco, Hakeen Nicks was still on the board when the Ravens were up. With an aging Ray Lewis, the Ravens could have added Rey Maualuga, the bone crushing middle linebacker from Southern California. Lewis could have schooled the somewhat immature Maualuga and given that Ravens defense the bite they require. However, upon seeing Michael Oher the offensive tackle from Ole' Miss available at their pick, it was a steal. Oher is a big talented offensive tackle who will need the coaching that Baltimore can provide him with. Anyone who has the physical talent and the drive can succeed with Ray Lewis watching over that franchise. Aside from Oher, the outside linebacker Paul Kruger from Utah is a fantastic fit for Baltimore. He's a speed guy with a ton of athleticism and can cover the edge. Baltimore addressed needs and improved on both sides of the ball.

Oakland Raiders The real loser of Day 1 wasn't the Oakland Raiders it was Darrius Heyward-Bey. The former Maryland receiver will go his entire career being constantly compared to what I project as the most gifted player in this draft, Michael Crabtree. The Raiders pick was there, it was Jeremy Maclin. Wait one second, I love Michael Crabtree but if you have durability questions fine, take the next best guy which isn't Heyward-Bey, it's Maclin. Furthermore, you've got five teams that selected wide receivers behind you, were any of them asked if they'd like to trade up and get Crabtree once he slipped out of the top five? Most likely they weren't. Heyward-Bey isn't a bad football player and we shouldn't say he is, but he isn't Michael Crabtree and doesn't deserve to be compared to him because Al Davis has lost his marbles. Missouri's William Moore who eventually landed in Atlanta was available in the second round and what does Al Davis do? He passes on Moore for Michael Mitchell whose draft review reads like this "he wasn't productive enough at the college level while playing against a relatively low level of competition" if that isn't enough to scare you I don't know what is.

Miami Dolphins I guess it is hard to argue with Bill Parcells, he did just win a division with a team that was 1-15 a year before that. However, I think he made some mistakes throughout the draft process. I think the Dolphins needed an inside linebacker type and had the possibility to select Rey Maualuga. Fine if you think he has character issues but don't go and draft Vontae Davis, a guy who was actually benched in his senior year for being immature. Pat White is a phenomenal talent, but no one was taking a risk as early as the second round and thats where the Dolphins picked him. I like Pat White and I like to believe he's going to fit fine in the wild cat offense the Dolphins used last year, however didn't the Patriots just load up with young quick defensive talent? Didn't the Jets just hire Rex Ryan, the architect of the Raven defense? You aren't going to smoke and mirror your way around those defenses.

All Fired Up: When Mike Crabtree's former head coach at Texas Tech came out and ripped NFL coaches like Eric Mangini for not selecting the 2x Biletnikoff winner I wasn't shocked. Coach Leach was right, Eric Mangini shouldn't refer to anyone as a "primadonna", I believe Mr. Pot would have something to say to Mr. Kettle if he heard that one. Clearly the Browns wanted a receiver, they drafted two of them in the second round. I still think they passed on someone 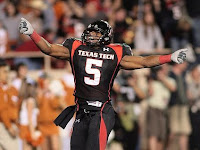 they'll regret passing on. As far as Jacksonville goes, they had more offensive line issues than anyone in the NFL, so they get a pass. As for the Raiders, I believe we've covered that. Do people understand what Michael Crabtree is capable of? Forget that he was in an offensive system that promoted throwing the ball and spreading out the field, we won't rehearse his stats because they are levels ahead of anyone at the same position. Michael Crabtree has the best hands in this draft, no one has better. Michael Crabtree is the only freshman to win the Biletnikoff Award. He did it for two straight years, with a quarterback who didn't even get drafted in this years draft, right or wrong? The 49ers who clearly had more holes to fill saw this gem sitting there and knew they couldn't pass on him. Michael Crabtree is a 6'3", 215lb., gym rat receiver. He'll be living miles away from Jerry Rice the greatest pass catcher of all time. I feel for Brady Quinn, his coach couldn't let anyone on that team be larger than he was.
Posted by Lynchy at Tuesday, April 28, 2009