I'm going to put a bow on the tournament, then change gears. Ty Lawson had seven steals in the first half, Michigan State turned the ball over 14 more times than North Carolina, the Tar Heels set a record for most points (55) in the first half of a National Championship game. You figure out what happened. Nuff Said.

Now, we're changing gears. Call it a knee jerk reaction, say it's only the first game of the season, but I mean it when I say it: C.C. Sabathia is not the savior in Yankeeland. The Baltimore Orioles chased Sabathia in the fourth inning. He finished the day giving up six earned runs, walking five batters, and allowing eight hits, ouch. This is the guy gracing the current issue of Sports Illustrated standing in Yankee Stadium with the the headline: Why C.C. Sabathia is going to be huge in New York. Newsflash, Sabathia is huge anywhere, he's about two and half bills. Maybe he's a slow starter, and maybe he'll end the season holding a Cy Young, but I doubt it.

Welcome back to the American League. Even the bad teams, like the Orioles, can tear the cover off the ball. Baltimore had five guys who hit 20+ home runs in 2008, they may not be able to pitch, but they can hit you C.C., your aware of that now.

Before Sabathia left for the National League last season, he was 6-8 with a ERA just under 4.00 for the Cleveland Indians. Prior to his breakout 19-7 season in 2007, Sabathia had just one season in the American League where his ERA dropped below 4.00, in his seventeen starts in the National League, he threw 1.65, see what I'm getting at? Now he's playing in the American League East, Tampa, Baltimore, Toronto, and of course Boston, are littered with players who can hit the ball hard. Vernon Wells, Evan Longoria, Adam Jones, and Kevin Youkilis, just to name a few. C.C., you aren't in Milwaukee and Cleveland, your not eating up the Royals and Reds anymore and it's about time the Yankees realize that.

Really?!? This is your "big-game" starter? He pitches amazing in the regular season, I'll give him that. But as far as big games, like his first start in 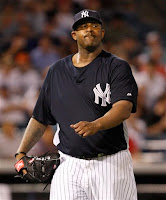 a Yankee uniform on opening day, he's not so great. Can't make it out of the 5th on opening day. Gives up five earned runs in 3 and 2/3rds innings against Philadelphia in the first round of the 2008 postseason. In two 2007 October starts against his new divisional rival, the Boston Red Sox, Sabathia gave up 12 earned runs in only 10 innings pitched. I think you've go to be pretty scared if your a Yankees fan after hearing that. This is the guy who gets the ball in tough spots? This is the guy in line to stop your losing streaks and recapture Yankee domination? Give me a break, in Boston they got a guy named Beckett, he's got a couple of rings on his fingers that read two words. WORLD CHAMP.

I know we all want to say the Yanks are the odds on favorite, and it's true they have a load of talent, but C.C. had to be convinced into New York, and he already struggles on the big stage: BE WORRIED.
Posted by Lynchy at Tuesday, April 07, 2009