Through Rondo's first five playoff games this season, he is absolutely giving the world a personal clinic on how to run the point and create offense. In the absence of Kevin Garnett and let's not forget Leon Powe, it is Rondo that is largely responsible for both picking up the slack and leading the Celtics to three first round victories. Pun which is totally intended, he is grabbing the bull by the horns.

On the glass . . . It isn't often that you see a point guard contribute as large on the boards as Rajon does. The third year point guard is averaging 10.2 rebounds per game in the playoffs. To put it bluntly, he's in the same neighborhood with guys like Yao Ming, LeBron James, and teammate Kendrick Perkins. From my 6'1" point guard, I'll take numbers like that any day.

His defense . . . A staple of the Celtics run toward the banner known as 17 was their unstoppable defense. Again, with Kevin 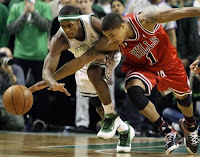 Garnett on the mend the Celtics do lack the defensive intensity they possessed only months ago. Someone must have forgot to tell Rajon that. In games 2 & 3, both Celtic victories, Rajon recorded five steals per game. Two games which resulted in Bulls star point guard Derrick Rose recording 9 turnovers combined. It should also come as to no surprise that Derrick Rose is recording 5.4 turnovers a game with Rondo playing opposite him. Let's also quickly note that of Rondo's 10.2 rebounds per game average, 7.2 of those are defensive boards, the man knows where to be to avoid giving his opponent a second chance.

Dropping dimes . . . 51 assists in five games, you do the math. Rondo is creating 10+ opportunities per game for his teammates to put the ball in the hole, and that's just the ones that were successfully converted. For the last two seasons we pretty much spoke of two point guards when it came to the word "elite," Chris Paul down in 'Nawlins and Deron Williams out in Utah. This isn't a love seat anymore, Rajon has sat down on the couch. All three point guards are averaging 10+ assists per game and after round 1, Rajon may be the only one left.

Clear out . . . Someone was going to have to pick up their scoring without Garnett, guess who? You know The Truth can make his own shot. Ray Allen is

one of the games greatest shooters, ever. However, it is Rajon Rondo that is leading the team in points her game. At 24.2 points per game, Rajon is elevating his scoring to the point where it's winning the Celtics games. His lowest point total of the playoffs thus far was a 19 point performance in the Celtics game 2 victory. His high, 29 in game 1. Rondo's outburst in the 4th quarter led the Celtics from an 11 point deficit to force overtime. No longer is Rajon the hesitant shooter that we saw in November & December. His 12 for 22, 28 point performance in game 5 helped give the Celtics the series lead and push the Bulls to the brink.

Are you adding it up? Go back and read that again . . fine, I'll give you the answer. Rajon Rondo is averaging a triple-double a night in the playoffs. Through five games the Celtics floor general is averaging 24.2 ppg, 10.2 apg, and 10.2 rpg. Impressed? You better be. It has got me to thinking that with a healthy Garnett, is it possible that the Celtics would have been better in 2009? Would the Celtics have been able to win a second straight title? Time will tell, but we are witnessing the evolution of one of the games fiercest point guards. Believe that.
Posted by Lynchy at Wednesday, April 29, 2009