You need KEEP IT REAL FRIDAY!

To the Jeff Jagodzinski faithful, move along. In the words of Anthony Soprano, "I’m gonna say a few things, I’m gonna a say some bad words and you, your just gonna have to deal with it." Jagodzinski revealed his true colors this winter, no bones about it. After getting shut out of the Orange Bowl, for the second straight year, by the same team that did you in the year before, Jags looked for the easy way out. For all intensive purposes, he got it. Here's a guy who signs a contract saying for the next five seasons, he'll be coaching Boston College football. Before the end of season number two, he's headed

for the exit. And for what? To be the offensive coordinator of the Tampa Bay Buccaneers? When you break it down, how much of Boston College's recent success on the gridiron is even a direct result of Jeff Jagodzinski? His first season with Boston College was defined by three syllables, Matt Ry-an. We all know now, Matt Ryan didn't need Jeff Jagodzinski, for crying out loud as a rookie quarterback he helped win 11 games and get his team to the playoffs. Season number two? Boston College had a top five nationally ranked defense led by such standouts as B.J. Raji, Mark Herzlich, and Ron Brace, none of which were brought in by Jagodzinski and none of which were coached by Jagodzinski, that credit goes to current head coach and Jags replacement, Frank Spaziani. So remind me how he's qualified for the Tampa job? Not to mention his offensive coordinator at Boston College, Steve Logan, is widely considered a better play caller. I liked Jags at first, don't get me wrong, but to look a guy in the face and tell him you aren't just using Boston College as a platform to be back in The League, then to turn around and do just that, pitiful. Keep It Real! Your nothing but a turncoat.

Baseball was always my favorite sport. I didn't care that it took 4+ hours to watch one game. I loved that it lasted from late February to early October. I always said it is harder to hit a major league curve ball than to do anything else in sports. I love the trades, free agent signings, and every other little thing the sport adds in its offseason. However, I can see why I am in the minority on this one. They announce Hall of Fame members, and all you hear about is who didn't get in. A hitter passes a career milestone, and all you get is doubt and skepticism. On a week when the sport of Tennis is in the midst of a grand slam event, the NHL and NBA are celebrating their all-star games, and of course the NFL is preparing for the sporting event of the year, you know what the most popular stories surrounding baseball are? An ex-teammate of Barry Bonds

testifying in court against him on perjury charges and a book written in part by former Yankee manager, Joe Torre, about how awful a human being his former player, Alex Rodriguez, is. Yet I ask, why?!? Why do we care about Barry Bonds, steroids, and HGH? His career is over, he's never getting in the hall, end of story. Why would you buy Joe Torre's book? So Alex Rodriguez isn't a great guy, I think we knew that when The New York Post plastered a picture of him with a stripper heading into a hotel room in Toronto. I don't need 200 pages written by SI's Tom Verducci to figure that one out for myself. All of these things are baseballs fault. The players union was too strong, you let drug use run rampant, and then tried to point fingers when it blew up in your face, making guys like Bonds and McGwire scape goats for your inability to effectively manage your league and everything involved with it. As for Joe Torre, I didn't see him take a moral high ground when he OK'd the acquisition of Manny Ramirez, known clubhouse cancer, to the Dodgers last summer, did you Joe? Baseball has become less about the product on the field and more about the circus off the field. Who can blame us for following every snap of the NFL, at least they attempt to stop problems before they are out of control. KEEP IT REAL! Baseball is finished.

I'm not going to lie. Hockey is back. There are most likely hundreds of thousands of people who have been with hockey all along, I for one, was not one of those people. I used to say the same things everyone did about hockey: No stars, the season is too long, there are too many teams, and not enough excitement. I would like to take Keep It Real Friday as the venue to say I was wrong. On Tuesday night, my brother and I went to the Bruins v. Capitals game in Boston. Lucky for me, my first professional hockey game since the Reagan administration was against two of

the leagues best teams in 2009. Hockey came out for me on Tuesday night. In the greatest sports city in the world, with two top teams, with loyal fans, and of course with the games premier superstar, Alexander Ovechkin. The Boston Bruins won a 3-2 overtime thriller that was capped off with a great goal and two great saves from Bruins All-Star netminder, Tim Thomas. The game was fantastic, the fans never stopped being into it and they even cheered injuries to the other team, that's hard core. First things first: (1) Cities like Boston, New York, Dallas, Los Angeles, and Detroit need to have teams that can compete for championships every year. (2) You need stars you love to watch and stars you love to hate. Case & Point Sidney Crosby and Alex Ovechkin. and (3) It has to have a twist, people look forward to the Super Bowl, the NBA draft, and the baseball hot stove, finally, hockey has started this outdoor new years day game, that's the thing. After a great all-star weekend and first half of the season, I look forward to the Stanley Cup playoffs, so should you. KEEP IT REAL!

I'd like to extend a "hats off" to Orlando Magic guard, Jameer Nelson. In just his fifth season in the NBA out of St. Joseph's University, the former college standout is an NBA All-Star. The 6-foot guard has averaged 17 points and nearly six assists a night for the Magic, who currently who hold the NBA's 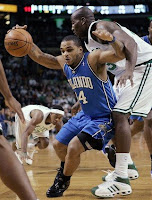 Time to KEEP IT REAL! fourth best record. The same night Nelson is announced as an Eastern Conference reserve in the 2009 NBA All-Star game, he drops four three-pointers en route to a 99-88 victory over visiting Cleveland. Over the first half of the 2008-2009 season, Nelson has already drilled (79) three-point field goals, 15 more than he had all of last season. For a guy who has been considered undersized, I'm guessing more often than not, Jameer Nelson will forever be able to place the words: "All-Star" next to his name. Keep It Real! Nelson is official.

As always, remember to Keep It Real!
Posted by Lynchy at Friday, January 30, 2009