The Super Bowl is on it's way, and after championship weekend we'll know whose in. As for today, you've got KEEP IT REAL FRIDAY! Eagles and Cardinals, Pacman Jones, the Baseball Hall of Fame, and why Sam Bradford spurned the Detroit Lions . . .

"They are, what we didn't think they were" The Arizona Cardinals and Philadelphia Eagles are in the NFC Championship; If you had bet me that a month ago, I would have laughed at you all the way to the bank. Explain to me how the Arizona Cardinals who can't win a road game to save their lives and have about .5 impressive victories on the season, go in and win two straight playoff games, and look GREAT

doing it? The Philadelphia Eagles on the other hand, oh no, wait a minute now, isn't this the same team that actually tied a game against the Bengals? Then followed that performance up with a 36-7 beat down at the hands of the Ravens just a week later? One of these two low-performing regular season teams is going to get a shot at the Lombardi Trophy. I'd guess the Cardinals were going to go out, rush the ball to open the game up, then take shots at their all-world wideout, Larry Fitzgerald. Their defense would play stingy like they did the last two games and head to Tampa. Then again I thought that Matt Ryan would rack up a playoff win against Arizona, that didn't happen. Maybe the Panthers would go for close to 300 yards rushing against a soft defense and topple the Cardinals, that didn't happen. We thought Adrian Peterson would rush for 100+ against the Eagles and give the Viking faithful a wonderful playoff win, that didn't happen. We thought the Giants would come out and put 35 on the board against whoever they opened up the playoffs with, asserting themselves as top dogs, and that didn't happen. The reality of the 2008 playoffs is, we have no idea what is going to happen. KEEP IT REAL! The Cardinals might be able to win this thing.

The Major League Baseball Hall Of Fame voting is a joke. Yea, yea, yea, so the writers finally voted in Jim Rice, after making the poor guy wait 15 years and become the poster boy for sympathy among baseball fans. I've never heard of guys

whose job could be less important making it seem more important in their own eyes, never. What does a player have to do to be a unanimous first ballot Hall of Famer? This summer, standing next to Jim Rice, will be none other than Rickey Henderson. The most dominant lead off hitter in the history of major league baseball. The games all-time leader in stolen bases and runs scored, but somehow only received 94.8% of the vote from the writers association. Explain to me what that other 5.2% was thinking? Rickey needed to do more? Did he need to do more when he stole 130 stolen bases in a single season? Just like those 8 voters who didn't believe the immortal Cal Ripken Jr. was hall worthy in 2007, they don't believe Henderson is this year. What possibly do these ball players have to do to impress a bunch of guys who don't play the game, THEY WATCH IT! They screw Jim Rice for the past fourteen years, they are in the midst of screwing Bert Blyleven, that's how they shut you out. When you deserve to get in and they can't deny you, they'll be damned if they all agree on putting you in. Your job is to write, to watch a sport, and somehow you make it your job to hold the games highest honor over former players heads. Keep It Real, your job isn't that important!

Just say it Sam, you don't want any part of being a Detroit Lion. Call me bitter, I am. Sam Bradford opts to stay in school; The same day that I release my first 2009 NFL Mock Draft, which includes the Lions taking none other than Bradford, #1 overall. Sam may have dreamt of being a Sooner for his whole life, but after three straight Big XII championships, a Heisman Trophy under his arm, and a trip to the BCS National Championship game, it was time to come out, not head back to

Norman. The reason he's headed back to college has nothing to do with graduating from school, winning yet another conference championship, or pulling an Archie Griffin. Nope, Sam Bradford is passing up guaranteed millions to avoid wearing the silver and blue of the Detroit Lions, and I can't blame him for that. He's pro ready and one year at Oklahoma isn't going to show us anything new. Think about it though, he ate up all the Big XII defenses had to offer, barely ever got sacked, and was the toast of the Mid-West. Yet somehow we thought if given the option between that and getting sacked five times a game on a 2 or 3 win pro team was worth it? Like Eli Manning not wanting any part of playing in San Diego, and John Elway before him not wanting any part of the Baltimore Colts, Sam Bradford wanted no part of the Detroit Lions. KEEP IT REAL!

So long, Pacman. The thing is, I'm not giving alot of respect to Jerry Jones and the Dallas Cowboys for cutting the embattled, Pacman Jones. The reality of the situation is, they are a day late and a dollar short. Pacman doesn't need 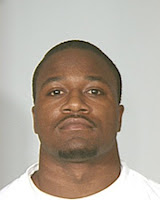 another team to take a shot on him, he needs to keep his nose clean and not to play football, but to live past the age of 30. Ordering hits, hanging out with known murderers, and staying out at strip clubs till all hours. This is what Pacman was doing while he was suspended from the NFL for an entire season. It doesn't matter if Jones has reformed, it doesn't matter if he has been going to AA meetings, the man doesn't deserve to make millions of dollars and play in the NFL. He just doesn't. Retire early at the age of 35, do some analyst work, sit on your millions, Pacman doesn't deserve to do any of that. Maybe now, after the only owner in the NFL risky enough to take a shot on Pacman, (no pun intended), has canceled his contract, maybe now Pacman will learn to live life like the rest of, by the laws. THAT is Keeping It Real!