We're recapping Wild Card Weekend and looking forward toward the Divisional Round. I'll remind you that I was 2-2 in my picks this weekend, and if I hadn't been sucked into the trap that was Chad Pennington playing mistake free football, I'd have finished 3-1.

Baltimore Ravens @ Tennessee Titans You want defense? You're getting defense in this one. Two of the AFC's top ranked defenses squaring off in the divisional round, what could be better? Ed Reed, Ray Lewis, and T-Sizzle? Tackles, Vanden Bosche and Haynesworth are expected to be off the mend and in the trenches for the Titans. Titan safety, Michael Griffin (7 interceptions) and veteran 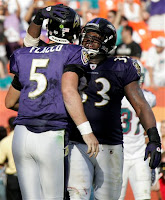 linebacker, Keith Bullock, await young Joe Flacco going for his second straight road playoff victory. Three out of the four teams who won this past weekend, rushed for more yards than their opponents, you run the ball, you win. Baltimore rushed for 137 yards in their victory over Miami, during the regular season they allowed just 81 yards on the ground per game. Clearly, they can both stop the run, and run on you. The Titans aren't much off Baltimore, the Titans gave up just 3.7 yards a carry during the regular season and had the NFL's seventh ranked rushing offense. Say both teams defenses come big and flat out dominate, like they have all regular season, that means either Joe Flacco or Kerry Collins are going to have to make some plays. I'll take the guy who has been to the Super Bowl, played great all season long, and isn't starting in just the second playoff game of his career. Hats off to Joe Flacco, but he went 9 for 23 against a Dolphin pass rush that gave him all day to throw the ball. Titans 17 Ravens 13

for over 100 yards, and the kicker banged out three field goals combined with a safety from defensive player of the year, James Harrison, and the Steelers only put 11 points on the board. I think the Chargers are this years Giants, they under performed in the regular season, snuck in the back door of the playoffs, and will turn it on come January. Here's the thing that can slow down Phil Rivers, the Steeler pass rush is different than the Colts. James Harrison is one of the fiercest defensive players this side of Ray Lewis and the Ravens. If the Chargers offensive line gets blown up like they did this past week, it could mean trouble. I've never bought into Ben Roethlisberger, I'm sorry, I just can't do it. Of the quarterbacks remaining, he comes in behind Rivers and Eli. I like Sproles to have another good turnout in the absence of LT; Chargers 24 Steelers 17

Philadelphia Eagles @ New York Giants My dad said last week, "No matter who plays the Giants in their first playoff game; watch out." I buy that. The Eagles were a bonehead pick 6 from Tarvaris and a screen play that went the distance, away from being beaten on the head by Brad Childress. Now the 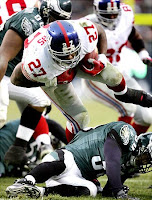 Eagles did however beat the Giants just a month ago in the same place they play this weekend, but I don't buy that. The Giants were in the midst of one of the worst mid season distractions, cough cough, Plaxico and the Eagles were still figuring out the rules that are overtime, lots of weird stuff going on. Brandon Jacobs will have rested his injuries for an entire 21 days, if he isn't ready to go by then, he'll never be. Justin Tuck will have a monster game, you can bank on that. The rushing attack of New York will be in full contact mode, and no matter what blitzes Jim Johnson puts on Eli, he isn't Tarvaris. I'd pick the Eagles . . . If they had ever found a compliment banging back to pair with Westbrook, and at some point had replaced the one they call T.O., but they never have. Quite frankly, that's the problem. Eli is workman like, Brandon Jacobs goes for 80 yards, Toomer and Hixon catch a couple big balls. Giants 34 Eagles 17

Arizona Cardinals @ Carolina Panthers The more time that passes, the more I buy the Panthers as a legit Super Bowl contender. I loved how they played against the Giants three weeks ago, they had a serious shot at winning that game and capturing home field throughout. HANDS DOWN, Jon Fox is one of the most underrated coaches in the NFL. For at least two years now, my buddy Joe & I have put Fox in the same category as Jeff Fisher, that's good company. The first time these two teams played, late October, the Cardinals hung around, they lost a tight 27-23 game in Charlotte. The key to that lost? Steve Smith, one of the few remaining big game 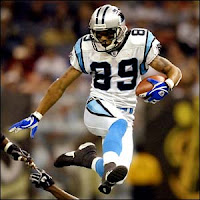 receivers left in the playoffs, and of course 1,500 yard, 18 touchdown, DeAngelo Williams. Williams went for 108 yards that day, just his second 100+ yard game, in a season which he racked up eight. Arizona managed just 50 yards rushing, 30 of which came on an end-around from Anquan Boldin. As ESPN columnist, and famed pod caster, Bill Simmons, points out "no team that celebrates a wild-card victory with a Gatorade shower, can or should advance in the next round." Not only do we not think Arizona can beat this team, but neither do they. If not for a lapse by linebacker Keith Brooking in the fourth quarter, you may have been looking at a Matt Ryan comeback victory last weekend. So don't get on the Cardinals just yet. They won on two fluke plays a week ago, and haven't won a meaningful road game since hmmmmm NEVER! Yes, I'm discounting their victories against the dreadful NFC west, after that, they are an amazing 0-5. Somehow you think they are winning at Carolina? Give me a break. Carolina 32 Arizona 24

Money Pick Of The Week: New York Giants -4 People, the Giants are playing in The Meadowlands against Donovan McNabb and Andy Reid. Please.
Posted by Lynchy at Wednesday, January 07, 2009