On Monday morning we are left with a fitting conclusion; The season which included a playoff without the Dallas Cowboys, New England Patriots, and Brett Favre, will continue with the Arizona Cardinals playing in their franchises first Super Bowl. Unfortunately for them, they'll be playing the Steel City Steelers, going for their record setting 6th Super Bowl victory.

The working mans city, against the retired city. The never been there franchise, against the frequently been there franchise. Pittsburgh v. Arizona seems odd at first glance. Then again both quarterbacks, Ben Roethlisberger and Kurt Warner have been to this rodeo before. Both head coaches raised this trophy before. Come February 1st, the Steelers and Cardinals will clash in Tampa Bay for Super Bowl XLIII and I'm going to get you prepared with five questions that need to be answered before the coin toss.

5. With what the playoffs have showed us, Where does Cardinals receiver, Larry Fitzgerald, rank among NFL wideouts? There's Larry Fitzgerald, and then everybody else. He can leap tall buildings, or 6'2" corners. He can stop a speeding bullet, or snag every over thrown ball from Kurt Warner. More powerful than a locomotive, or has better control over his body than Andre or Chad Johnson. So Larry Fitz may not be Superman, but over the past three

weeks, the boy has gone out and for all intensive purposes, tortured NFL secondaries. Saving his best performance for the NFC Championship and possibly the NFC's best secondary they had to offer. In three weeks Fitzgerald has caught 23 balls for a total of 419 yards and five touchdowns. Bare in mind, Fitzgerald is the only receiver to catch three touchdown passes in the first half of an NFC Championship round game. In just his fifth NFL season, Larry Fitzgerald at the age of 25, has finally got the opportunity to show the world what his talents consist of on a national stage and show the world is what he did. Not Randy Moss, Steve Smith, or stud Houston Texan receiver, Andre Johnson, have been able to do what the 6'3", 220 lb. Larry Fitzgerald has just completed. Fitzgerald has an inch or more on every Steeler corner, take this as your official warning, Ike Taylor, DeShea Townsend, and William Gay, on February 1st, be prepared.

4. Kurt Warner is headed to his 3rd Super Bowl and Ben Roethlisberger his second, which quarterback has the edge? Warner has punched his ticket to Canton with this postseason performance. So when they get to Tampa, it is no doubt that the veteran Warner, has a leg up. Against a phenomenal Philly secondary, Kurt Warner went 21 of 28 for 279 yards passing, 4 touchdowns, and 0 interceptions. See what I'm getting at? If any quarterback knows how to use all his weapons, it's the guy who made his name as the general of the "Greatest Show On Turf." During the last three weeks, Kurt Warner has been a model of consistency. Completing 19+ passes in each of the games,

throwing in excess of 220 yards every time out, and a passer rating above 90%, you guessed it, every game. Each start, Warner has completed passes to 8 different receivers, defining the term "spreading the ball out." I'd also like to add that Mr. Warner doesn't feel he is done yet, while Big Ben has been anointed as the next Terry Bradshaw in the Steel City, Warner is playing for a contract in the '09-'10 season. If he is looking to retire, I'm sure going out on top would be a priority to him. With the game and the NFC Championship on the line, down 24-25, Kurt Warner heads out on the field and drives the Arizona Cardinal offense 14 plays for 72 yards eating up seven minutes and fifty-two seconds on the game clock and then caps it off with a touchdown and two-point conversion to take a 32-25 lead. BALLGAME. No can stacking talk here, Kurt Warner is making history.

3. The Super Bowl is outdoors at Raymond James, Doesn't this benefit Pittsburgh? No doubt about it. I'm different from most fans, I want a rainy Florida day, I want it mud filled and nasty. I'm guessing so do the Steelers and their legions. The best way to take away the passing attack led by Kurt Warner and Larry Fitzgerald, make it so they can't pass. The last time I

recall Arizona playing in the crap weather, they got throttled at the hands of the Patriots, 47-7. However, if weather isn't a factor, the Pittsburgh defense will take care of that. Ranked #1 in defense against the pass, the Steelers allowed just twelve passing touchdowns all season long and only 156.9 yards passing per game. They picked the ball off twenty times, good for sixth among the NFL leaders, led by none other than All-Pro safety, Troy Polamalu. In ten regular season games, the Steeler defense allowed 14 or less en route to a 12-4 regular season finish. If your banking on Kurt Warner throwing for 300 yards against this defense, be prepared to write a few checks. While Warner will provide a difficult task for the Steeler secondary, they are up to the challenge, and if it's raining, problems will develop for the Cardinals, very early.

2. How much of an impact will the Anquan Boldin sideline tirade have on the Cardinals? Hopefully it deters talking heads from reverting back to Warners days with the Rams and about how he loves god and stacking cans at the local A&P, but I doubt it. This story has some legs, but it's Super Bowl week, the story about which player is out partying till 3 AM will have alot more. Boldin is about to get laid off at seasons end, he's the #2 receiver on 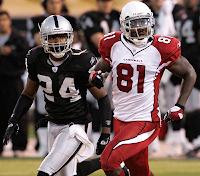 a team with the NFL's #1. With the play of #3 wide out, Steve Breaston, Boldin has become situational on the Cardinals, while he is still very good, I don't find Ken Whisenhunt to be the type to put up with crap from a guy who has three or four touches a game. He's crazy to think that the Cardinals are going to go out and pay top dollar to retain his services, you don't invest money into that many guys who catch the ball, especially when an upgrade on the offensive line should be made. Anquan choosing not to celebrate with his teammates will filter through the locker room, the coaches losing respect for him will definitely make an impact, and the fact that Kurt Warner and Larry Fitz are more locked in than ever, means dooms day for Boldin. When your team is driving down the field trying to win the game and they call for Steve Breaston to be running routes over you, clearly they have issue with your game. No one will look worse here than Anquan, and it won't effect a team that has other options, better options.

1. Now that both Steeler head coach, Mike Tomlin, and Cardinal head coach, Ken Whisenhut are in the Super Bowl, who was the better coach for that Steeler job, post Bill Cowher? I like Ken Whisenhut, but any guy who can moonlight on FOX's House and coach the Steelers, is aces in my book. Upon Cowher's retirement in Pittsburgh, I thought there would never be a coach who fit their city like Cowher to Steeler Country. However, when Mike Tomlin runs out of the tunnel in that black bubble jacket, I'm proved wrong. Mike Tomlin is a

defensive guy, the Pittsburgh Steelers are a defensive team. Ever since I was a little kid the Steelers did two things, play defense and rush the ball. With Defensive MVP, James Harrison heading up their defense and Willie Parker back healthy and rushing the ball, the Steelers live up to their form. Mike Tomlin knows what the Steelers are built to do and he doesn't try to do anything different than that, exactly why he fits this club. When you watch Whisenhunt's offense throw the ball 30 times a game, when you see them nail a flea-flicker from Arrington back to Warner and end up in the Fitzgeralds hands, that is who Arizona is. When you see the Steelers maintain possession for 14 minutes and 43 seconds of the third quarter in their divisional round victory over San Diego, you know that is the Pittsburgh Steelers. From Chuck Noll, to Bill Cowher, to Mike Tomlin, the Steelers are exactly who you think they are.

Check back all week, were going to start position by position to see who the winner of this Super Bowl will be: LynchyRightNow.Com
Posted by Lynchy at Monday, January 19, 2009