Despite going 0-4 in the Divisional Round, I'm still picking winners for the Conference Championships. If your looking to make some money this weekend, I'm 2-6 so far in the playoffs. Safe to say, I pick losers pretty well.

NFC Championship: Philadelphia Eagles @ Arizona Cardinals Both St. Louis quarterback, Kurt Warner, and Philadelphia quarterback, Donovan McNabb, have been to the Super Bowl. Only Warner knows what it is like to win one. I'm still skeptical that the Eagles have enough fire power to beat the Cardinals at 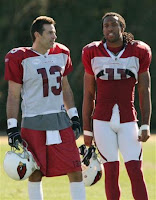 their place. In two-straight wins, the Cardinals and Kurt Warner have hung 30+ on both of their playoff opponents. Brian Westbrook at 75% may not be enough for the Eagles to do significant scoring on Arizona. Here's the kicker, for four quarters at University of Phoenix Stadium, the Atlanta Falcons were unable to hear Matt Ryan's cadence. The Falcon tackles were whipped off the edge and Matt Ryan had little to no time to throw the ball. Judging by what the Cardinals were able to do stopping both De'Angelo Williams and Michael Turner in back-to-back weeks, the Eagles will be forced to throw the ball to win. With that said, I don't trust Donovan McNabb and an injured Brian Westbrook to go out and take the NFC Championship. The Cardinals fans got up for their first playoff game in 100 years, now they get to see their team book a trip to Tampa Bay and the Super Bowl, my guess is they'll be slightly more excited. 6-2 in Arizona during the regular season, 1-0 in the postseason, I think they have locked up some form of home field advantage. Expect All-World wideout Larry Fitzgerald, to impact this game in a big way. Arizona 24 Philadelphia 13

*Because of the 0-4 showcase last weekend, my version of the sports gal is determined to give the readers a little help. Her pick: Philadelphia 30 Arizona 24

AFC Championship: Baltimore Ravens @ Pittsburgh Steelers It's pretty difficult to beat a team three times in one season. Their first game in Pittsburgh, the Ravens were topped 23-20 in overtime. Eleven weeks after that, the Ravens were once again beat, 13-9. Can the Steelers complete the sweep, and beat the division rival Ravens for a third straight time in the 2008-2009 season? The veteran, hard hitting Raven defense led by Ed Reed hasn't had a week off since 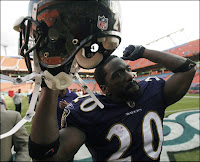 September 14th. The Steelers got to rest for 14 days before playing their first playoff game, and it showed when running back Willie Parker rushed for 146 yards over San Diego last weekend. The Steelers are going to work with a Super Bowl winning quarterback, a reigning defensive MVP, playing on their home turf. The Ravens are headed to Pittsburgh after playing two straight weeks on the road in Miami and then in Tennessee. They have a rookie quarterback under center, who is just 20 for 55 passing and is averaging just 148 yards through the air in the postseason. These playoffs have featured an 8-0 home team losing to a 0-5 east coast road team, two top seeded teams losing at their own place, and a team who just five weeks ago didn't know the rules of overtime ending up in the Conference Championship. This is where the unexpected stops: Pittsburgh 23 Baltimore 13