Tell me a Super Bowl you've watched that was better? One of the most amazing plays in Super Bowl history just before the half. Two Super Bowl winning quarterbacks tearing up defenses in the 4th quarter. Victory snatched out of the opponents hands

not once, but twice. One of the most memorable catches in Super Bowl history with seconds remaining on the game clock. Two receivers vaulting themselves into Super Bowl glory with mind numbing play. And we haven't even gotten to half time show put on by 59-year old Bruce Springsteen and The E Street Band. All-in-all, it doesn't get much better than that.

It isn't that the Cardinals took too long to get the ball in the hands of Larry Fitzgerald, it's that they couldn't. The Steeler defense was all over Kurt Warner in the first half. The only time Kurt was allowed to throw the ball was when he'd have seconds to dump it off to James in the flat or find Boldin for 8 to 10 yards. The moment that Steeler defense got winded, Kurt exploded, and in turn

so did Larry Fitzgerald. The Steeler offense maintained possession for 12:27 of the first quarter. Two drives over five minutes and nine plays each, which resulted in points on the board. You don't think the idea was to keep Kurt and Larry on the sideline? Kurt couldn't relax in the first half for a second. When the Steelers turned the ball over just inside their own territory right before the half, Kurt drove right down the field dropping passes right over the defensive line. That monster play by James Harrison, was only capable because of the pressure Warner was feeling. Harrison drops back when he knows Kurt is trying to get it out quick, and there goes the defensive player of the year right down the sideline. Your not that smart, Larry Fitzgerald would have touched the ball more often in the early going, if Warner had just a few more seconds to get rid of the ball.

Mike Tomlin said it best, that game was Steeler football at its finest. Ball control, field position, and monster defense. To open the game, Pittsburgh drove 71 yards over 9 plays resulting in a field goal. Their defense forced the Cardinals to punt just 3 minutes and 30 seconds after getting the ball. The offense went back to work and drove 69 yards over 11 plays in 7 minutes and 12 seconds, the result was a touchdown. Upon getting the ball for the first time in 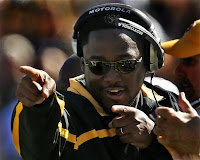 the second half, the Steelers would drive 79 yards in 16 plays using 8 minutes and 39 seconds off the game clock. That is how you build a 20-7 lead heading into the final 15 minutes. They will take their shots down field if they are there, but if there not, they will grind you out with backs in the flats, drop offs to the tight ends, and rushes up the middle. In the Cardinals three touchdown scoring drives they managed to take only 9:05 off the clock. The Steelers on the other hand, take 22 minutes and change in their four scoring drives. When Cardinals receiver, Larry Fitzgerald, went and took the lead from Pittsburgh in the fourth quarter, he made one fatal flaw: Left too much time on the clock for Ben Roethlisberger. Sometimes, everything you have just isn't enough.

Back to that interception return for a touchdown by Steeler linebacker, James Harrison, seconds before the half, inches in front of the end zone. I don't think we are grasping the significance of that play, or at least I'm still in disbelief. Forget the fact that it's the longest play in SB history, forget the fact that if Harrison had been tackled at the five the half would have been over, and forget the fact that the one play is slightly overshadowed by the fourth quarter performance of Santonio Holmes. Steeler defensive coordinator, 71-year old Dick LeBeau deserves that Lombardi Trophy, he is responsible for placing that trophy in that Steeler trophy case, more than anyone on that team. First off, it's his defense that applies pressure to Kurt Warner throughout the entire first half. They allow the same play that Kurt threw the interception on, to happen three times on that drive, giving him the comfort that it'll take to force him into it again. The field is as short as it is going to be for the Cardinal offense, and that is when he decides to pull Harrison up. Kurt throws the ball out fast, expecting the likes of Harrison to be on him, and the safety and corner are off the ball in case Warner

pumps and goes to the back, he doesn't and James Harrison is hit right in the chest with a ball intended for Larry Fitzgerald over the middle of the field. Now if Harrison is tackled shortly after making the play, the Steelers still go into the half with a 3-point lead. If Harrison is tackled before the clock runs out he could have put the Steelers in field goal position, giving them a six-point half time lead. But no, Harrison is able to run 100 yards to pay dirt and give the Steelers a 10-point half time lead. If they'd held the Cardinals to a field goal, their in the lockeroom tied up. If they'd given up the touchdown, they are down four and the Cardinals will be getting the ball to open the second half. That one play, the four extra points that were managed by scoring after the interception, that was the difference in the game. If they give up a touchdown, were probably praising Kurt Warner much more today than we are, if they allow a field goal, were probably watching the Cardinals march out their kicker for a game winning kick, none of that happened because Dick LeBeau put James Harrison in the right spot, and if you think Harrison is smart enough to do that on his own, then ask yourself why he throws the Cardinal player 30 yards off the ball resulting in a 15-yard penalty in the fourth quarter? That play, not the Santonio Holmes catch, was the play of the game.

The Cardinals made me a believer, the NFL regular season is about one thing: Get in the tournament, and go from there. The NFL isn't worse off because the Cardinals came within a hair of winning their first Super Bowl, they are better off. All twelve teams in the playoffs next year will get respect due to what Kurt Warner and Ken Wisenhunt just accomplished. (and even David Tyree a season before) Who knows what would have happened if the Giants and Titans, the NFL's

two #1 seeds, met in the Super Bowl? For all intents and purposes, who cares? We watched the NFL's most dynamic reciever shred the NFL's most vaunted defense in the fourth quarter. This wasn't a 30-18 blowout. Hell, if that game is played 10 times on a neutral field, I'm not so sure the Steelers win more than 5 times. The Cardinals played as tough as anyone, they weren't that team that got blown out 47-7 in Foxboro just weeks before the playoffs, they weren't. Going forward, no opponents should be taken lightly by the media. (that is unless the Vikings get back in the tournament with Tarvaris) After the Giants upended a previously undefeated Patriots team, and the Cardinals took the #1 defense within minutes of the Lombardi, it's official, the season before means nothing, and the regular season is only used to get teams into the tournament.

Ben Roethlisberger is on the list. He'll have as many as Brady and Aikman by the time he retires. He'll make an attempt on Bradshaw and Montana. After going 21 of 30 for 256 yards passing and throwing the game winning touchdown in 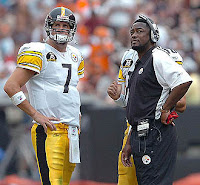 Super Bowl XLIII, not even I will attempt to tear him down. Roethlisberger didn't have Willie Parker rushing for 100+, he only got 53. He didn't have 100% healthy Hines Ward, he only caught the ball twice. Troy Polamalu didn't bail out Big Ben and disrupt the Cardinal offense. Nope, when nothing else mattered, Roethlisberger marched his team down the field, avoided sacks, and at the last second found the open man, with a little help from the hands that Santonio Holmes has, the Steelers and Ben Roethlisberger made another assault on history.

. . . And that is why we watch the game, and that is why NFL is king among American sports.
Posted by Lynchy at Monday, February 02, 2009