With so much time left before New England and New York kick-off, what better way than to bang out another ten-draft prospects. We're covering the most elite linebacker in the draft, a trio-of National Championship players, and the best tight-end west of the Mississippi! From Chestnut Hill to Palo Alto and back . . .

Luke Kuechly, linebacker Boston College He's no question about it, the next great young linebacker in 'The League.' Sideline to sideline the most dominant defensive player in college football this past season, Kuechly brought home a slew of postseason awards; 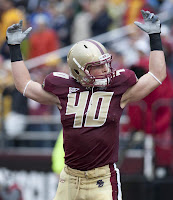 Nagurski, Butkus, Lombardi/Rotary, and Lott IMPACT, to name a few. After the junior campaign that Kuechly boasted in 2011, there was no way he could return to Boston College for his senior season. Slightly undersized at 6'3", Kuechly makes up for what he lacks in size by his intelligence on the field. As the 2011 ACC Defensive POY, Kuechly also was given Walter Camp honors as a 1st Team All-American, the only back-to-back selection on the defensive side of the 1st team. Give it two seasons and Kuechly will fall somewhere between Bears all-global linebacker Brian Urlacher and Patriots tackling machine Jerod Mayo. Disclaimer; Watching Kuechly since his freshman year on Chestnut Hill as an STH has left me slightly biased. Projection: Arizona, Chicago, and Tampa Bay.

Stephon Gilmore, cornerback South Carolina We have zero issues identifying talent here at LynchyRightNow, that being said, Gamecocks junior corner Stephon Gilmore has Top-25 talent, as a junior! Two-and-a-half minutes into game film against Auburn, you can see how good Gilmore's ceiling is, and I'm talking about his sophomore year. Open field tackles on Cam Newton, ripping up Nick Saban's Crimson Tide, that's what it took for SEC foes to take notice of the 6'1" sophomore and prepare for him this past season. Gilmore can shed blockers with the best of them and step up to make plays with the size on his frame. 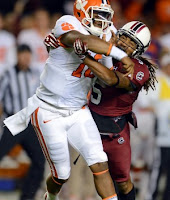 At the next level he'll have be forced to play up on receivers, as there are 31 other teams with a receiver the caliber of Julio Jones. In our mind, we picture Gilmore and fellow Gamecock receiver Alshon Jeffery doing battle in practice and you don't get better NFL prep than that. Projection: New England, Dallas, and Buffalo.

Dwayne Allen, tight end Clemson You don't think the postseason performance of Patriots TE Rob Gronkowski, 49ers TE Vernon Davis, and Saints TE Jimmy Graham hasn't gotten NFL draft scouts giving the best tight end in college football second looks?!?! While not as vertically gifted as Gronk, Davis, and Graham, Allen has shown glimpses of brilliance this season in Death Valley. Good blocking tight end, check. Ability to get up the field on linebackers and make catches over the middle, check. Endzone monster? Check. Eight touchdowns this season, and we're good. Expect Allen to be the first tight end off the board and for every good reason there is. Projection: Atlanta, NY Giants, and Indianapolis.

Courtney Upshaw, linebacker Alabama My man played so well in the National Championship, he pumped his draft status to top pass rusher available! All reports out of Mobile, AL and the Senior Bowl have been great for Upshaw. Scouts have said not only is Upshaw NFL ready, but his quickness off the ball and strength up front have yet to be matched by anyone else in Mobile. On a Nick Saban team you can expect team from all of these Crimson Tide players profiled, they're supremely gifted, ready to play at the next level, and at the top of their positions. I don't expect there to be too many people comparing him to Broncos star linebacker Von Miller, but that's where we've got Upshaw. An upperclassmen with above average intelligence and super-human strength. Expect Upshaw to sneak into that top ten. Projection: Buffalo or Seattle.

Trent Richardson, running back Alabama We love Trent Richardson on the next stage! He's a bigger, stronger, version of our favorite AFC running backs, Raven Ray Rice and Jaguar Maurice Jones-Drew. Every one of those 96-yards he banged out against LSU in the National Championship game were what we refer to as 'man-yards,' had to earn every last one of them! A 3-down back in the NFL, Richardson is a quality blocker with his strength and you 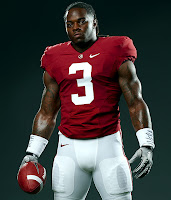 know he can get 1st downs! Considered a very good pass-catching running back, there are a number of NFL teams that are going to fall in love with what Richardson can add to their offenses. He's that talented to be a top-five pick in the draft, if the NFL hadn't turned so pass-happy. Projection: Kansas City, Cincinnati, and Denver.

Ryan Tannehill, quarterback Texas A&M When Oklahoma's Landry Jones and Trojan Matt Barkley opted to return to college football in 2012, the first thought that came to our mind was, Ryan Tannehill just made a bunch of money! Now widely considered as the third best available quaterback in this years draft crop, Tannehill has heard his name float everywhere from the early first round to late second round, from Miami to Cleveland. With former Aggie head coach Mike Sherman ousted from College Station and sure to find his way back onto an NFL sideline, things are working out for Tannehill. Sure, Tannehill has a tendency to throw interceptions in big games, three against Oklahoma, three against Texas, but he's got that NFL size and big arm teams look for. We don't buy Tannehill as a starting quarterback over the next few seasons, but then again we didn't buy Ponder last year and now the Vikings aren't looking to upgrade at all. A couple years learning the position, or thrust into a good situation, Tannehill could work in the NFL. Projection: Miami.

Dont'a Hightower, linebacker Alabama The third 'Tide player this week, following a week where we included corner Dre Kirkpatrick, and we're almost done gutting Saban's defense, with just safety Mark Barron to follow, and you wonder why we loved Alabama in the National Championship. Let's get to Hightower though, he's an inside linebacker with a ton of talent up the middle of the field. More so, we really hope Hightower lands late in the first or second round on a defense that is built which needs to improve their inside linebackers, say the Steelers or Ravens. A linebacker who benefited most at Alabama playing on a defense with help all over the field, he'd be a great addition to either one of those AFC North squads. Much like Kuechly at Boston College, Hightower leads a defense by making tackles all over the field (85 this season), Projection: Baltimore, Pittsburgh, and Dallas.

Nick Perry, defensive end USC Perry really made a name for himself in the second half of the this season, and he's a huge reason why the Trojans turned it on late as well. The Detroit native is a terribly fast pass rusher with a gift at getting to the quarterback, his nine

and-a-half sacks led the PAC-12 in 2011. In the NFL there are a number of teams looking for a pass rusher with the upside of Nick Perry. At 6'3" and 250 lbs., Perry will most likely have to put on a little more weight without losing any of his lighting fast speed. Being coached by Monte Kiffin in 2011 has really done wonders for Nick Perry and there are a ton of teams at the next level that will be putting a call into Kiffin to find out just how good Perry has become. Projection: Tennessee, New England, and Green Bay.

Coby Fleener, tight end Stanford Andrew Luck had to pass to someone right?!? In his four years at Pala Alto, the 6'6" Fleener got better and better each year collecting career-highs in catches, yards, yards-per catch, and touchdowns all in his senior year. Fleener has

developed into a terrific route runner and has an uncanny ability to find holes in the secondary in which to make big plays down the field. With the success of such big tight ends as Jimmy Graham in New Orleans this past season, Fleener who is nearly identical in size is going to get many looks, including looks from the team who drafts his college quarterback Andrew Luck. Projection: Indianapolis, New York Giants, and Buffalo.

Jayron Hosley, cornerback Virginia Tech The Virginia Tech cornerback is a double threat, he's a quality return man and plays great in pass defense. I expect there to be a run on corners in the early going of the draft, previously we've discussed Mo Claiborne, Janoris Jenkins, Dre Kirkpatrick, and this week Stephon Gilmore, which means it's Hosley's turn. With lighting quick recovery speed, Hosley makes up for his smaller stature. Now I have my reservations on Virginia Tech defensive players, was it really there ability or the ability of defensive coordinator Bud Foster to have them in the right position to be most effective. That being said, a player who can be a quality return man and pitch in on a good secondary, I like Hosley. Projection: New York Giants, Atlanta, and Chicago.

For more Lynchy, hit us on Twitter!
Posted by Lynchy at Sunday, January 29, 2012