One of the coolest things about betting on the games biggest stage?!?! Proposition bets! (That's if gambling was legal) So if we WERE able to make these bets, here a few we would . . .

To win Super Bowl XLVI MVP? A less than 100% Patriot tight end Rob Gronkowski means A-W-A-T-T (All Welker, All The Time). Tom Brady is a very smart man, he doesn't make the same mistake twice. Meaning?!?! Throwing into double-coverage hoping Matthew Slater is going to come up with the ball isn't an option. Also didn't Wes Welker get engaged recently?!?! 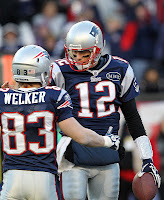 As a man walking straight into the hornets nest that is matrimony in less than two months, we got to put our money where our mouth is. TB is one for making historical figures out of his pass catchers, or making them straight millions; see David Givens, David Patten, and Deion Branch. You're either getting paid or you're raising hardware. Wes Welker +1200, Bank It!

Who will the Super Bowl XLVI MVP thank first? I can't even believe we can do this? I hate to see what God's day would be like if it weren't spent helping athletes W-I-N. You got to know that whoever wins MVP thanks the lord and savior first?!?! Also, I'd love to know what this line would look like if Tebow ever gets the Broncos into the Super Bowl. Mortal Lock: God +175

Player to score the 1st touchdown in Super Bowl XLVI? We're from Massachusetts, you know that right!?!? We really think Eli & Co. are going to make everyone from Augusta to New Haven sweat bullets on Sunday night. The fact that former University of Massachusetts standout Victor Cruz can dominate any New England 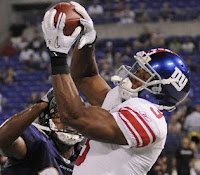 defensive back plays right into that. Cruz has had the innate ability to make big plays in the biggest moments, just ask Rex and the Jets if you don't believe us. Eli to Cruz, move all-in . .Victor Cruz +650

Will the Patriots score in every quarter? By hook or by crook, you 'betcha! Dominating offense, solid kicker, scoring in every quarter shouldn't be that difficult, and for sixty bucks?!?! We're comfortable laying the $100. Here's what really does it for us, you know they're scoring in the fourth quarter, the third quarter is their quarter because they've historically made the best half-time adjustments. I'll waive the 1st quarter and say they score in one of their first two possessions, with everything hinging on quarter number TWO! Yes +160

Will the Giants throw a first-half interception? First off, Eli threw an interception in the first meeting earlier this season. Secondly, he throws a ton; 32 Times against Atlanta, 33 times against Green Bay, and 58 times against San Francisco . . IN THE RAIN! If Eli comes in, really confident and really excited to get out there and play, he's going to throw a INT. The 'Niners had more than one opportunity to record an interception two weeks ago and just didn't! I still don't respect the Giant offensive line as much as the public has and they've still got to put a body or two on Vince Wilfork. Eli makes a big mistake early. Yes, he throws a first-half INT +150

Total field goal attempted by both teams? You've got a Giants defense that is pretty stout, they aren't going to give up crazy yardage to New England. That Patriot defense has played well in the postseason and I respect that. In a game that is going to be very close, points are at a premium. Both of these coaches know to take the points and kick the field goal, also 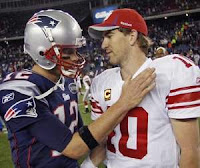 they're indoors meaning weather is completely irrelevant in their decision to kick the field goals and put points on the board! Over 4 field goal attempts +150

How many times will NBC show Peyton Manning? I know NBC and the world loves Peyton Manning, however if the Patriots win and I think they will, how often do you think Peyton is going to be on camera?! He's smart enough to stay away from the camera while watching his brother play. I'm hoping that all the coverage on Peyton will saturate the moment and keep NBC away from rehashing it. Here is what I see for mentions; (1) "Peyton with Archie watching his baby brother try to win his second . . " (2) Camera finds Colts owner Jim Irsay, starts talking about his relationship with Peyton, then camera finds Peyton back in the box with his father. (3) Reaction to Eli's first touchdown. (4) Reaction to Eli's poor timing mistake in the first half. That's it! Under 5½ Times -155

Another Super Bowl column up tomorrow . . .

For more hit us on Twitter!
Posted by Lynchy at Saturday, February 04, 2012