'Bama Storm In 'The Bayou'

That was exactly what I had hoped for. A grind-it-out performance (as much as you can grind out a 21-0 win) from Alabama en route to a second National Championship in three years. It's taken me a few days and one podcast, to take all of the 2012 BCS National Championship Game in, but I think I've done it.

First thing is first, had the Stanford Cardinal (11-1; pre-Fiesta Bowl) or the Oklahoma State Cowboys (11-1 pre-Fiesta Bowl) been awarded a shot at the LSU Tigers, we'd be looking at the second best team in the country holding that crystal football today. Let us make no bones about it, the Crimson Tide were the most complete team in college football throughout the entire season.

Couple their dominant rushing attack led by Heisman finalist Trent Richardson (1,679 yard and 21 touchdowns) with the best defensive team in the nation (allowing just 8.2 ppg), and you've got no arguement otherwise. We'll put it down right now if you haven't already heard; The Crimson Tide would have never allowed a conference foe to hang 53-points on them in Tuscaloosa as Stanford allowed Oregon to do in Palo Alto. More so, Crimson Tide would never have lost in Ames, Iowa to an Iowa State Cyclones team that would finish their 2011- 2012 campaign 6-7 with a loss to Rutgers in The Pinstripe Bowl, as Oklahoma State did. If anyone in Stillwater wants to lay claim, including those four voters in the Associated Press who somehow arrived at the decision to select Oklahoma State as the #1 team in the country after all was said and done on Tuesday morning, you ought to have your head examined.

Blame LSU head coach Les Miles and the 'Bayou Bengals coaching staff for that offensive performance on Monday night. Two series, that's all it took for the entire country to realize that LSU had nothing on offense and if they planned on winning a National Championship, their defense was going to have to create points. Real talk now, was it arrogance or short-term memory loss?!? Back on November 5th, the first night these two teams met and a 9-6 LSU 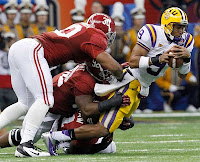 overtime victory, it was Miles & his staff that quickly realized starting quarterback Jarrett Lee didn't have what it took to beat Alabama on their turf and a switch to the more mobile Jordan Jefferson was the answer. On Monday night however, when Jordan Jefferson was being swarmed each time he attempted the option and that LSU ground game was stagnant, Miles and that coaching staff refused to turn to Jarrett Lee and any semblance of a passing attack. The 'Bama defensive backs stepped up seven-yards off the ball and that linebacking duo of Courtney Upshaw and Dont'a Hightower crowded the line of scrimmage, and that's all she wrote folks. I've got to call it arrogance though, the Tigers are too smart to not know that a change had to happen as early as the first quarter or they were going to be on the losing end. Credit the 'Bama defense though, not allowing LSU over the 50-yard line till the 4th quarter, well that's making a statement.

Lastly, he wasn't the BCS National Championship Game offensive MVP for nothing. Ladies & Gents, I give you Alabama sophomore quarterback A.J. McCarron. Sure, it helps having Trent Richardson in the backfield grinding out a 96-yard performance on twenty carries, but McCarron stepped up on the biggest stage. Completing 23 of 34 passes 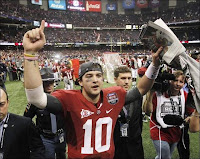 is pretty good, hooking up with seven different targets for over 230 yards passing is real good, but against LSU's ball-hawking defense, staying interception free has to be the biggest of all McCarron's stats on Monday night. McCarron didn't force passes, he dumped it off to his senior tight end Brad Smelley seven times, and that tear drop to Darius Hanks right over the head of Tyrann Mathieu, well that was just flat out baller. He may not have been the reason they lost to LSU the first time back in early November (while that interception that night right in front of the endzone didn't help things), but he sure was one of the biggest reasons Alabama hoisted a trophy the second time around. Roll Tide, Roll.

So now we find ourselves all wrapped up at the end of a near perfect season. LSU came so close and on the final night looked so far away. Nick Saban captured his third title, chalk that one up for the bad guys. Last but not least, the Southeastern Conference placed a National Champion on top of the mountain for the sixth straight year. Some things are just the way they're supposed to be . .

for more LynchyRightNow, hit us up on Twitter!
Posted by Lynchy at Friday, January 13, 2012