It's been an exciting couple weeks, for all of us who have been invested in Bowl Season we've seen some great games! Yet lets turn our focus back to some of those stars who will be playing on Sundays next season . . .It's the Week 2 Draft Profile!

Morris Claiborne, cornerback LSU The leader of the LSU secondary, this six-foot corner makes opposing quarterbacks know exactly where he is on the field at all times. As a junior, Claiborne had several key games including a monster outing against Alabama which saw him record three tackles and break up a couple passes to go along with his game changing interception. A part of several post-season All-American honors, Claiborne was also able to bring back The Jim Thorpe Award to Baton Rouge as the nation's top defensive back. For the second straight year, an

LSU corner could be selected within the top five selections of the NFL Draft. Projection: Minnesota, Dallas, and Cincinnati.

Robert Griffin III, quarterback Baylor Since putting up nose bleeding numbers en route to a Heisman Trophy, so much has gone right for Team Griffin III. (1) A monster performance against Washington in the Valero Alamo Bowl. (2) The success of fellow Heisman winner and current Panthers signal caller Cam Newton. A very similar quarterback with a big arm, ability to lead, and make plays from all over the field. (3) A ringing endorsement from established NFL coaches such as former Colts coach Tony Dungy. So yes, I'm pretty sure that Griffin III can expect his name to be called very early on draft night. Projection: Miami, Jacksonville, and Washington.

Dre Kirkpatrick, cornerback Alabama The Crimson Tide's top defensive back is either 1A or 1B in the country. He's a 6'3" speedster with the ability to make big plays in big moments. With the type of game the NFL has become on a week to week basis, defensive backs like Kirkpatrick are going to be all the more important at slowing down receivers and passing games.

His physical play is what we love, Kirpatrick can stuff receivers at the line and also get down field with them very quickly. After LSU's Morris Claiborne comes off the board, expect teams to start jockeying to get where Dre Kirkpatrick is. Projection: Dallas or Carolina.

Riley Reiff, offensive tackle Iowa Someone is in the ear of this 6'6" mammoth of an offensive lineman because Reiff wasted no time declaring he'd be headed to the NFL as a junior. Along with Trojan Matt Kalil and Cardinal Jonathan Martin, both in our Week 1 Draft Profile, Reiff could be yet another offensive tackle chosen within the top ten selections, he's that good. After quarterback, tackle is the most important position to draft here in the early going to sure up your protection for that signal caller, making Riley Reiff a ton of money! Maybe it's just us, but Oakland's 2004 draft selection of tackle Robert Gallery has soiled us on Hawkeye lineman, just throwing it out there. Projection: Miami and Buffalo.

Devon Still, defensive tackle Penn State Possibly the baddest defensive player in the draft, and we mean bad in the best possible way. Devon Still is a monster on the field, weighing in at 310 pounds

with lighting speed off the snap, who wouldn't be? Devon Still could have been a top pick in 2010 after making ten tackles for a loss and adding four sacks along the way. This season however, Still made a huge impact on the Nittany Lion defense. Not only was Still the Big Ten defensive player of the year, post season the Nittany Lion defensive tackle was selected as finalist for both the Bednarik and Outland Awards. Expect a team looking to free up linebackers to find a way to get to the top of the draft to grab Devon Still. Projection: San Diego, Tennessee, and Dallas.

Peter Konz, center Wisconsin It's a Badger offensive lineman, what more do you need to know?!? Following in the footsteps of current Wisconsin offensive linemen in the NFL, Gabe Carimi, Joe Thomas, John Moffitt, Kraig Urbik, and Bill Nagy, the All-American center will be on his way to the next level. With several quarterbacks losing their centers this season, Konz will make more than one team look to select a center as high as the early first round. Badgers running back Montee Ball can speak on Konz' behalf for how dominant he is in the center of the offensive line. Projection: New York Jets, Detroit, and Dallas.

Alshon Jeffery, receiver South Carolina With one great touchdown catch at the end of the first-half in the Capital One Bowl, the 6'4" Gamecock receiver reminded us how great he really is. Playing with instability under center in 2011 and the absence of injured running back Marcus Lattimore,

South Carolina could never find a rhythm to get Jeffery involved in their offense. That being said, slide back to his 2010 numbers where Jeffery grabbed 88 balls for well over 1,200 yards. For Jeffery, his challenge to NFL teams is proving that he is on the same level as Oklahoma State receiver Justin Blackmon, who prior to 2011 were battling each other for top receiver honors. Those in the market for a big, physical receiver with great hands as a first or second option could see themselves grabbing Jeffery early. Projection: San Francisco, New York Jets, and Philadelphia

Kendall Wright, receiver Baylor Someone has been catching passes from Heisman Trophy winner Robert Griffin all season long, right?!?! Thirty more catches, 711 more yards, and twice as many touchdowns (14), those are the off-the-chart numbers Wright put up in his senior year in Waco, Texas. Nine times this season Wright has racked up 100+ yard games, including two big games down the stretch, 208 against Oklahoma and 166 against Texas. Now vaulting himself amongst the top 3 or 4 receivers available in the draft, expect Wright to become a very hot commodity after Jeffery and Blackmon fall off the board. Projection: San Francisco, New York Jets, and Philadelphia.

Michael Floyd, receiver Notre Dame There isn't a front-office that won't be looking into Floyd's off-the-field issues. A DUI last year after announcing he'd return to South Bend for his senior season, 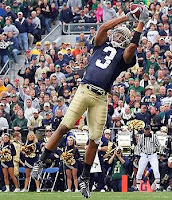 another minor alcohol related offense earlier, and Mike Floyd has earned himself a reputation that will be difficult to look past if a team is going to spend a high-first round selection on the 4-year receiver. However, when you at production it really doesn't getter better than Floyd. He's amassed back-to-back seasons of 1,000-yards receiving and nine touchdowns or more, never with a consistent quarterback throwing to him over the past two seasons. After 37 career touchdowns, it's possible that there is a team looking to add a very strong pass catcher with great hands. Projection: Philadelphia and New York Giants.

Quinton Coples, defensive end North Carolina It always seems as though there is one of those ACC pass rushers that gains a ton of steam heading into the draft, even former Clemson Tiger Da'quan Bowers gained steam despite injuries. Before we get into how good Coples is, I preface this with the fact that I don't know how well the ACC offensive lineman played this year, really pumping up every edge pass rusher. With that, Coples has double-digit tackles for a loss and has totaled close to ten sacks in 2011. His play has been highlighted in Chapel Hill for each of the last two seasons and rightfully so. With lighting speed off the edge, this 6'6" pass rusher is going to gain a ton of hype after teams see how fast he can be. Projection: Jacksonville, Miami, and Buffalo.


*Oklahoma quarterback Landry Jones, highlighted in our Weekly Draft Profile; Week 1 is headed back to Norman, OK for his senior season. We're not sure who is advising young Landry, but it is our belief that coming out in 2012 won't increase his draft value at all. Either way, Jones' decision to return has just made a to be determined second-tier quarterback a ton of money.