Can you hear that?!? It's the roar from Baton Rouge growing louder and louder as the 'Bayou Bengals rip through college football. With wins in Starkville, Morgantown, and a thirty-point beat down of the Gators this weekend, the Tigers are

It started in Dallas, TX at the Cowboys Classic against a high-powered Oregon Ducks team returning back from a BCS National Championship Game appearance a season ago and returning their dynamic rushing attack of LaMichael James and Kenjon Barner. Four quarters into their 2011 campaign, defensive coordinator John Chavis and the Tigers defense had held the pair to just under three yards a carry while forcing four turnovers. Despite 21-year old senior quarterback Jordan Jefferson under investigation for an off-the-field incident, amongst other Tigers players, LSU wouldn't lose focus. A 40-27 win over Oregon was exactly what head coach Les Miles had hoped for in his teams opener. They brought speed, power, and a backfield in Michael Ford and Spencer Ware which combined for well over 150-yards rushing while finding the endzone three times.

Since that night, the Tigers haven't looked back. A defense led by superstar defensive back Tyrann Mathieu who is forcing turnovers all of the field in every way possible and establishing a defense which is allowing just twelve-and-a-half points per game, good for eighth overall in the country. They've held a Mississippi State team who is averaging nearly 30-points per game to just six points in their September 15th meeting, in

Mississippi. They've gone into West Virginia and forced four turnovers and held the Mountaineers to zero points in both the first and final quarters en route to a 47-21 road victory on September 24th, West Virginia's only loss. Then, this past week against a banged up Florida Gators team coming into 'Red Stick,' the Gators flat out got their doors blown off. The Gators were just two of eleven on third downs against the LSU defense. Twice the Tigers intercepted rookie Gator quarterback Jacoby Brissett, one from Mathieu and again from senior Brandon Taylor. That Tiger rushing attack we saw displayed in week one came out with another strong performance racking up 238 yards on the ground including a 100-yard, two touchdown performance from Spencer Ware. After a 41-11 route, Gators 1st-year head coach Will Muschamp must have been scratching his head all week long.

Looking ahead, over the next three weeks the Tigers get no rest. To Knoxville against conference foe Tennessee, who on a sidenote get the Tigers and the #2 ranked Crimson Tide in back-to-back weeks. Then LSU will welcome 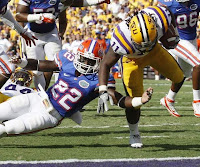 in War Eagle and the Auburn Tigers. All leading up to a road trip in Tuscaloosa on November 5th against 'Bama, the virtual national championship game as both LSU and Alabama have played second fiddle to no team out of the gate. As the road gets tougher and LSU becomes more and more viable to win the National Championship, they're just getting better and faster. Jordan Jefferson, formally suspended, is working his way back into the offense. Spencer Ware is adding another speed weapon in that LSU backfield, already racking up over 400 yards and five touchdowns. Be on the look out for LSU, these Tigers don't make appointments.

LynchyRightNow Heisman Watch: In our opinion, it begins and ends with Stanford's Andrew Luck. All due respect to the

other candidates in play, Baylor's Robert Griffin III, Boise's Kellen Moore, and Oklahoma's Landry Jones, but the Heisman should be going to Andrew Luck. I'll attempt to ignore that Luck is the most hyped quarterback since Peyton Manning, as he should be. Stanford is 5-0 this season including 3-0 in the PAC-12, in large part due to Luck. In each of The Tree's first five games, Luck has thrown for at least two touchdowns or more, giving him fourteen on the season. His numbers would be so much more impressive had his Stanford team not been able to rest him in blowout victories, they'll just get better. Continue to follow everything coming out of Palo Alto surrounding Andrew Luck this season, it's going to be exciting.