Too High On Baton Rouge!

We're getting after it with college football this week, for a new Episode of The RightNow Podcast, follow that link! LSU gets high, South Carolina suffers a major blow, Wisconsin gets their first road test, looking to prove something special, and the Oklahoma State Cowboys are not sneaking up on anyone!

It's possible that I was too high on the 'Bayou Bengals, it's possible. No one loves Les Miles and LSU more than I do . . .okay, so I'm sure that there are 100,000 strong that pack Louisiana State's Tiger Stadium every Saturday that are bigger fans of Miles than I, either way

I enjoy watching LSU play. That being said, I find it very hard to believe a team with multiple off-the-field issues is going to remain untouched in college football's toughest conference. With Tyrann Mathieu, LSU's elite defensive back, and Spencer Ware, their leading rusher, both sidelined due to an off-the-field issue, I think I'm out on LSU. I know they're just playing the 20th ranked AUBURN TIGERS this weekend, and I'm aware that they headlined the first BCS Rankings out earlier this week, but I've had their November 5th date with the Crimson Tide in Tuscaloosa circled on my calender for eight weeks now. It is far to close to that date for the Tigers to be sorting out discipline. Roll Tide.

I'd really be depressed if I was Steve Spurrier, I'm talking like remarkably depressed. It was one thing when Spurrier's hand was forced and beleaguered quarterback Stephen Garcia was dismissed earlier this month, but to lose Heisman candidate and Gamecocks star running back Marcus Lattimore for the remainder of the season? Well, that's just harsh. The #14 ranked Gamecocks will stumble into an off week before hitting the road to Knoxville and Fayetteville. As high as we were on South Carolina out of the gate, recent events have turned on things in Columbia,

You've yet to see Wisconsin play outside of Camp Randall, right? So, why shouldn't undefeated Oklahoma State and undefeated Boise pull down top five bids in week one of the BCS Rankings over the Badgers? National Championship bids are not won without playing in-conference on the road, and that is just what Wisconsin is going to do in the next two weeks. This week in East Lansing, Russell Wilson and his Wisconsin Badgers are going to run head first into Michigan State coming off their biggest win to date, a 28-14 victory over Michigan. Next week, the Badgers head to Columbus, Ohio and meet the Buckeyes who just dropped Illinois in Champaign. We'll talk about trumping Boise and Oklahoma State once that road test is over.

Speaking about Oklahoma State, How 'Bout Them Cowboys?!? Now I don't know what to think of Mike Gundy & Co. right now. I love watching them play and I'm worried that if I don't get in front of a television by 12:30 tomorrow, the Cowboys will have already run Mizzou off their own field after a 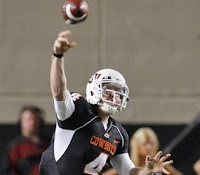 noon kickoff. With quarterback Brandon Weeden in the midst of a terrific season, completing 72% of his passes and putting up big game after big game, Oklahoma State has arrived. With wins in College Station and Austin, the Cowboys have shown they can go on the road and win. They've displayed a dynamic passing game, a solid rushing attack, and most importantly a defense that steps up in huge situations. Our question on Oklahoma State remains the same, LSU, Oklahoma, and Alabama have been to the top of the mountain before, do Gundy, Weeden, and All-American receiver Justin Blackmon know what to do when they're the favorites?