Well, I need a cigarette.

The team that did the most this week has to be the New Jersey Nets and owner Mikhail Prokhorov. If in fact it was the Nets final offer to Denver in a last ditch attempt to acquire All-Star Carmelo Anthony, which in turn forced the Knicks to make an offer Denver couldn't refuse, Prokhorov successfully

drove the price up on the Knickerbockers. Even Knicks team president Donnie Walsh has to know that giving up Ray Felton, Wilson Chandler, Danilo Gallinari, Timofey Mozgov, along with a first-rounder and cash, may have been way more than they thought it would take to acquire Anthony. Did the Knicks think Prokhorov was going to steal 'Melo if the reached free agency? Then, just as the new-look Knicks were making their debut, Nets GM Billy King moves rookie Derrick Favors, veteran guard Devin Harris, draft picks and cash to Utah in exchange for one of the leagues premier point guards in Deron Williams. With more than a season to prove to Williams that he will be the face of the Brooklyn Nets, prior to hitting free-agency in 2012, the Nets are off and running.

[I retract all of the following if the Knicks win a title by 2015.] I can't say I know exactly what the Knicks are planning here. So yes, I'm betting against James Dolan and Isiah Thomas. As I wrote earlier this week, no matter 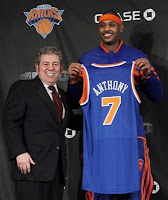 what Donnie Walsh says in the press, this wasn't the deal he wanted. The Knicks could have held off on Carmelo till the summer, because he wanted New York not East Rutherford. Wasn't trading draft picks and dealing away quality pieces, and over paying what got the Knicks into problems under the Isiah regime? All of my questions on Amare's health haven't been answered just because he's been healthy in 2010-2011. The Knicks summer 2010 splash has only played in 56 or more games in five of his eight years in the league, and you don't get healthier as you get older. If they find a way to bring in the Chris Paul in another year, then that changes the game, but overpaying for Carmelo Anthony just didn't seem as necessary at this point with all they gave up to do so.

As for the Boston Celtics, I really don't know. On the one hand, Kendrick Perkins was probably going to cost the Celtics more than they wanted to pay him. With his knees issues raising major concerns in the front office, this shouldn't be as big of a surprise. The C's were 33-10 while Perkins recovered from knee surgery much of the first half of this season, (0-1 in Game 7), and

Celtics GM Danny Ainge has to think long-term with the Celtics at some point. You know the ages of Boston's three veteran all-stars which has to play a factor here. We as fans aren't concerned about 2012,2013, or 2014, yet Ainge still has to be. Let's face it folks, who the Celtics got in return, Oklahoma City's Jeff Green, well he's a good player. The C's get a young guy who can give Paul Pierce rest he needs. The Celtics last time out against the Miami Heat, Pierce was dog tired covering LeBron James and useless on the offensive end. Judging by the other smaller moves Boston made, moving rookie Luke Harangody, Semih Erden, and Marquis Daniels, the Celtics are prepared to add a buy-out player any day now. It's a gamble for Ainge and the Celtics, considering how well Perkins fit in this starting five, but as Ainge did in 2007, maybe this was the best move to improve their roster.

The most interesting sidenote had to be the Heat vs. Bulls game on Thursday night. As the trade deadline approached, both teams holding still, the Bulls roared to a statement making victory over Miami. Several things became much more clear to me in the Miami loss than they had been all season: (1) No team in the Eastern Conference is rolling over because of what Miami did this offseason, in fact they've become more hungry than ever. Teams like Boston & Chicago play up to Miami even in the regular season. (2) Did the Bulls become the strongest post All-Star break? With Noah returning from injury and enough time to get it together before the postseason, they might just have. (3) No matter how many times Kobe Bryant wills his Western Conference All-Stars to a win and an All-Star game MVP award, he's still only one of ten players on the court giving an effort.