There is little doubt Utah Jazz all-star point guard Deron Williams is 1A or 1B at his position. Averaging 17+ points and 9 assists-per-game over his six-year career, Deron Williams is making Jazz fans forget about Hall of Fame court general John Stockton very quick.

At 26-years old, embattled Nuggets superstar Carmelo Anthony is one of the league's most dynastic talents. The 6'8" small forward scoring machine who is good on the glass as well, has become the most talked about player in the league over the last three months.

That aside, these two Western Conference all-stars have managed to do what I'd thought was impossible just months ago: Put a dent in the Anti-LeBron sentiment running through The Association.

What reasons does Deron Williams have to be upset about with his situation in Utah? Till a couple weeks ago, Williams was being coached by a Hall of Famer, not the likes of Mike Brown. Till this summer, Williams had a running mate in Carlos Boozer who was putting up 20/10 a night, as oppose to guys like Drew Gooden, Larry Hughes, and Anderson Varejao. What is wrong with playing for a franchise which was contending for titles before him, has shown the 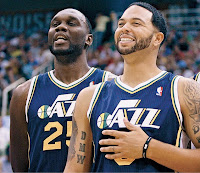 ability to stay relevant over the past 15 years, and has fans as rabid for hoops as their religion? However, all of that doesn't seem to be good enough for the 26-year old guard who is now throwing his name into the Tri-State hoops reorganization. Deron Williams isn't playing in the sports dungeon of Cleveland, and as far as I'm concerned has a pretty good thing going on in Utah. So what's the problem D-Will? The Jazz went out and got Al Jefferson, a 26-year old replacement for Boozer's production, who hasn't missed a game this season and is pulling down almost 10 boards a game. Deron's got no reason to be upset about playing for an organization like the Jazz, it's about time he just let his play do the talking and we'll talk about 2012 (when he can become a free agent) when it gets here.

Let's get after Carmelo Anthony. Hope you're happy now. As of 10:45 PM on Monday night; Carmelo is a Knick. Hold on though, just one second. . . What's the draw? O.K. I get it, played his 1 season of college ball in upstate New York, from The Big Apple, but what's the end result here? LeBron, Dwyane, & Bosh are just going to get even better. The Celtics have been 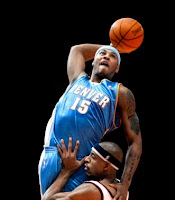 more than obvious that they intend to contend every season, and that ownership group is committed to winning. But the Knicks? If James Dolan owned the Timberwolves, would Amare & Carmelo ever have thought about Minnesota? So he brings in Donnie Walsh, all due respect but has Donnie Walsh ever put together a championship team? To make things worse, Dolan still employs Isiah Thomas, the same man responsible for embarrassing the franchise on a number of occasions. Mike D'Antoni? His teams still don't play defense and you know what those men in Boston do best? You guessed it. I hope Melo knows what he is getting into, only way I see this working out is if Walsh, Thomas, Dolan, and D'Antoni can somehow lure in a top notch guard in the next two seasons.

Bottom line here, 'Melo & D-Will need to stop talking and step-up, like Rose is doing with injuries in Chicago, and Rondo did by defending LeBron, it's time these two players get to it!
Posted by Lynchy at Monday, February 21, 2011