How Does This Play Out?

A banged-up Paul Pierce (right hand, left ankle) shooting 0-10 from the floor. Playing without injured 'big-men' off the bench, Shaquille O'Neal (right leg) and Semih Erden (right groin). Still, the Boston Celtics find a way to beat the now 39-15 Heat for the third time this season on Sunday afternoon, 85-82.

How? Well, it's that Championship Pedigree that continues to push these Celtics. The 16-points and clutch free throws off the bench from forward Glen Davis. The triple-double from guard Rajon Rondo, making up for the play of ailing fellow starter Paul Pierce. 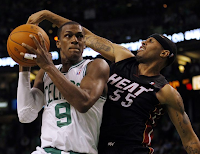 15-point (season high)Center Kendrick Perkins performance, taking full advantage of the Heat playing without the injured Udonis Haslem. Snapping Miami's 8-game win streak, beating LeBron for the fifth time in his last seven games against them, reminding everyone who holds court till you take it away, those are the moments the near 40-win Celtics show up, regardless of who's injured. At 39-14, the best in the Eastern Conference, a 24-5 home record, allowing the fewest points per game in the entire league, how will the 10'-11' season play out, the fourth year of their current dominating run?

Why this ends in an another title!

There is a new captain of this ship, Rajon Rondo turned the page in '10-'11. The Future, The Clinic, The Game. Call him what you will, I'll refer to him as Banner 18. As his team grows older around him, Rondo seems to become stronger allowing his game to flourish. His third quarter 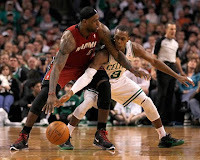 defensive stand against LeBron James who had more than eighty pounds and seven inches on the Celtic point guard may not have been effective in a coaches eyes, but the intangible effect? The packed to the rafters Celtic faithful roared on each possession. The Heat turned confused, frustrated, even angry. The veteran Celtic roster came alive. Rondo, on his own, began to filter into LeBron's head every trip down the court, pestering him by nearly jumping in his pocket. Think LeBron, Wade or anyone in this league could intimidate Rondo at this point? He's gone toe-to-toe with Derrick Rose two years ago, and I'm going to just come out and say it, he's the best passer in the NBA.

Put Rondo & a healthy supporting class in the postseason, and the Eastern Conference better watch out. Follow Lynchy on Twitter!
Posted by Lynchy at Thursday, February 17, 2011