How Heat It Is

We like this right? Losers of five straight, six of their last seven. Spoelstra on the brink. LeBron trying to have his awkward TebowESQUE

moment after a early-March loss? Bosh publicly questioning his role in the Heat offense. Being called out by Stan Van and the Zen Master in the same week. Catching more vitriol usually set aside for franchises the caliber of the Yankees and Cowboys. The Miami Heat have become a punchline. Yep, the self-proclaimed Team John Dillinger has entered a free-for-all and if not for Chuck Sheen, they'd have our 100% undivided attention. Oh, and we're loving it!

Upon further examination of the column I wrote praising these same Heat back in early February, I'll admit that I may have missed a few very important details. They're as follows:

Jackson, Popovich, Brown, Riley, and Rivers. Only 5 head coaches have raised an NBA title since the start of the '95-'96 season. Eric Spoelstra isn't getting on that list this 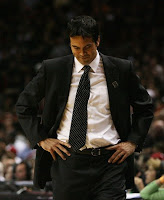 easy. For starters, you don't let it slip that grown men are shedding tears over a regular season loss. It's bad enough that at the very least two players in that locker room believe they know more about winning and how to get it done at this level than the head coach, now the rest don't trust you. Whether it be Miami's confusion at the end of close games, the inability to build on-the-court chemistry between your three best players, or just your missteps in front of the microphone, Pat Riley has more than enough just cause to make the move when he sees fit, and that isn't a thought, that will happen. Maybe not before the end of this current season, yet if Spoelstra makes it past an early playoff round exit, I'd be shocked.

They aren't scaring or sneaking up on anyone. The Celtics have dropped them three times this season and the Bulls have done the same. For you scoring at home, that's 0-6 against the top two teams in the Eastern Conference. Over the last couple days, the Heat have blown a huge lead against Orlando, been blown out in

San Antonio, and got their bells rung by Portland, all playoff teams. With L.A., Memphis, and Oklahoma City coming in next, it's put up time for LeBron and Company. When does a team lose confidence against the better opponents? Noah's Bulls and Garnett's Celtics play with a level of confidence and intensity that Miami just hasn't been able to match. How many times can you lose games to the same team before you believe you can't win? The Miami Heat will have a very short playoff experience if they can't figure out how to finish off and beat those teams who have smothered them all season long.

Maybe only Dwyane Wade knowing what it takes to win a championship isn't enough? Wade hasn't taken the leadership role through any of this. He could have taken the stance that his team isn't doing the things they need to win, he could have publicly called out Bosh or at least spoken to Bosh about talking to the media about his role in the offense, and why hasn't he demanded the ball 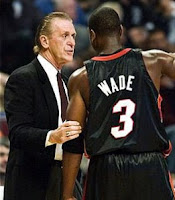 at the end of games? Kobe does, Pierce does, Ginobli has the ball in his hands, but Wade? How many times have you seen LeBron take the back seat to the guy who actually has the hardware to back up what he should be preaching? LeBron quit on the Cavaliers last year, go watch those Eastern Conference games against Boston, he flat out quit. Bosh? I'm not sure he even knows what playoff basketball is like, he spent his whole career in the basketball annex that is Toronto for crying out loud. As much as we don't like the fact that Riley is hovering around this team, that's a guy who knows what it means to put championships in the rafters, maybe that's what they need?

In any event, the Heat aren't the team they dreamed up last summer. If they have spawned super teams in New York and possibly New Jersey and Orlando, they are going to have to put it together with more than just three blank checks and a bunch of fill-ins.