As season 3 of NBC's hit comedy The Office kicked off in the fall of 2006, we saw it coming. New addition to the cast Ed Helms was a certifiable superstar. With Stamford office co-worker Andy Bernard, Helms gave the show yet another hilarious funnyman and a reason for viewers to 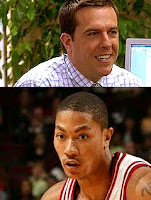 continue to come back week-after-week. Just over two-years later, Helms was pulling his teeth out of his head and marrying strippers in the box office mega-hit, The Hangover. Why does this matter on a sports blog? It's the best career comparison I could think of to describe what we're witnessing this season with Chicago Bulls super-guard Derrick Rose. From 2008, a year in which Rose appeared in the NCAA National Championship game, w0n NBA Rookie of The Year honors, and battled in an epic 7-game playoff series with the Boston Celtics, to his now sudden rise to NBA MVP candidate in 2011, Rose stock is selling at an all-time high.

No team is heading into the All-Star break playing with as much confidence as Derrick Rose's Chicago Bulls. On the heels of a 10-point home thrashing of the NBA's best San Antonio Spurs, Rose and the Bulls have more than playoffs on their mind. In their 109-99 victory over the Spurs, the Bulls All-Star guard went off for 42-points,

eight assists, and five rebounds. With Rose amongst the top-ten in both scoring and assists, it should come as no surprise to anyone that the Bulls have dropped the Celtics, Heat, Mavericks, Magic, and Spurs all since the first of the year. At 25-4 in Chicago, they boast the Eastern Conference's best home record, for that the Chicago faithful made Rose the Bulls first All-Star game starter since MJ.

Averaging career highs in nearly every statistical category, Derrick Rose is for sure front running the MVP race this season. Even more to his credit, prize off-season acquisition Carlos Boozer has missed 18-games this season due to injury along with center Joakim Noah who has missed 30, including that 10-point win against San Antonio. With Boozer back and playing well, and Noah expected back from injury soon after the break, how much better will Rose have these Bulls playing? How much upside to these Bulls have ahead of them? If the Bulls can continue their great play against the NBA's best, the Celtics and Heat better take notice if they haven't already. Derrick Rose is an MVP and the Chicago Bulls are for real!
Posted by Lynchy at Sunday, February 20, 2011