All Football, All The Time: Mailbag

With receiver Austin Collie out, what are the Colts chances? - Whitney, Michigan

Clearly Manning was targeting Collie and hoping he'd be the difference maker in the Colt offense come the postseason. The Colts really haven't played well this season. Ranked 32nd in the NFL in rushing yards and 28th in rushing yards allowed, their main concern should be around running the football. Possible playoff opponents New England, Pittsburgh, Baltimore, and Kansas City have all proven they can move the ball through the ground game this season. Too many injuries on both sides of the ball, I'm confident the Colts are one and done.

Thoughts on Mike Shanahan and the mess that has become the Washington Redskins? - Steve, New York

Why? I've never been a Mike Shanahan guy. His most successful seasons in Denver were more a product of Terrell Davis rushing for 1,700 yards and 2,000 yards in back-to-back seasons, not his coaching. Shanahan is a reputation guy, exactly what Redskins owner Daniel Snyder gives money for. He's paid out countless players on reputation alone because he doesn't know what he's doing, and coaches

are no different in the Daniel Snyder world. Shanahan botched the Albert Haynesworth situation from day one, now he's doing the same with Donovan McNabb. He employs his son who has little or no respect as a coordinator in the NFL, at least not from the players. McNabb wasn't brought to Washington to play backup to Rex Grossman and John Beck, if Shanahan didn't think he was the guy they should have never brought him in. In two years Mike Shanahan will be out in Washington and Daniel Snyder will be starting over yet again, they put the fun in dysfunctional.

I'm convinced it's the 10-4 Baltimore Ravens. Three reasons: (1) January 2010, the Ravens went to New England and won convincingly, 33-14. It's going to take a team that has won in Foxboro previously to do it again. (2) Ray Rice is a game changing back, which New England

witnessed first hand in last years postseason loss. When Cleveland was able to beat the Patriots earlier this season, they leaned on running back Peyton Hillis (184 yards). When Green Bay took New England to the wire on Sunday night, they leaned on a rushing attack that ripped off 140 yards on the Patriot defense. (3) The Ravens keep games close. Of their four losses, none are by more than five points. Baltimore hasn't given up 30 or more points but once. That is the type of defense and running game that can shake up New England.

I've had some time to really think about this since their November 26th overtime loss to Nevada. While I would love to see Boise State playing for the National Championship, they don't deserve to be. As for a BCS bowl game against a power conference program, say Arkansas or Ohio State, we'll just have to wait 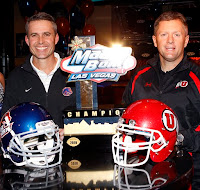 another year for that. Boise State had the smallest of margins to sneak their way into one of those post-New Year's Day bowl games, and they couldn't do it. Let's be realistic, do you know how difficult it is to go undefeated in the SEC as Auburn did or in the PAC-10 as Oregon did? Every close game has to go your way, every opportunity needs to be taken advantage of, every turnover has to land in your hands, kicks through the uprights, tipped passes, fumbled snaps, everything has to go your way. For Boise State, it's only fitting they find themselves playing in Nevada, the same state that saw their dream season hopes get snatched away.
Posted by Lynchy at Wednesday, December 22, 2010