As the postseason picture becomes clearer and clearer by the day, things are picking up. Prior to releasing the LRN Week 15 Picks, we've got some house cleaning to do.

The New England Patriots should book their flight to North Texas now, because who's stopping them? Since mid-October they've gone on the road dropping San Diego, Pittsburgh, and Chicago. As for at home? Please. The Patriots don't lose games in Foxboro, Massachusetts. Ask Indianapolis, Baltimore, and of course the J-E-T-S, all who learned it the hard way. At 11-2 and 6-0 at home,

the New England Patriots have carved up everyone in front of them and are leaving a wake of destruction behind them.

Further more . . . Tom Brady is the NFL MVP for the 2nd time, period. It isn't because Mike's a bad guy or Peyton caught the interception bug, it's because no player in the league has been this dominant in 2010. Brady hasn't thrown an INT since October 17th, a span of over 260 attempts. Against All-World defenses in Pittsburgh, New York, and Chicago, Brady has completed a mind numbing 69.4% of his passes to pair with 9 touchdowns and 1,045 yards through the air. Game over.

Jeff Fisher is done in Tennessee after dropping to 5-8 last Thursday night. In the midst of a six-game losing streak, including three straight to divisional opponents, 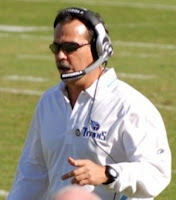 Fisher is most likely finished at seasons end as the head coach of the Tennessee Titans. The NFL's longest tenured head coach (16-years at the helm of the former Oilers and current Titans) will suffer his fifth losing season over that time if the Titans don't win out against Houston, Kansas City, and Indianapolis. Between the head coaches fallout with franchise quarterback Vince Young and a losing season, the Titans are in need of shakeup.

Jason Garrett has earned the right to be the next head coach of America's Team. They practice harder, they score more, they win more, and they flat out compete more. This is a different team than what Wade Phillips was putting on the field every week, different than a team that started the season a 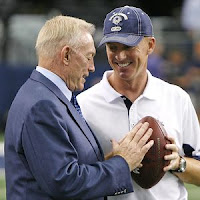 dreadful 1-7 prior to his firing. Now 3-2 under Garrett, with two losses of just a field goal each against playoff bound opponents, the Dallas Cowboys are playing somewhat like the team we had expected to see in 2010. In the post 45-7 debacle in Green Bay, the Cowboys are playing much better under the direct control of interim head coach Garrett, and they're doing it with 38-year old backup quarterback Jon Kitna. Hey Jerry, let's get this done quickly after the season ends.

The Texans are flat out snake bitten. After their bye week on October the 24th, they've not just hit a wall, they've smashed directly into it head first. Losing six of their last seven, four by a touchdown or less, the Texans now sit behind both Indianapoolis and Jacksonville all after starting

out 4-2. After clawing and scratching their way back into their Monday night game against Baltimore, a game which saw quarterback Matt Schaub put together two 90+ yard drives to tie the game, the Houston fans watched it all melt away as Schaub threw an overtime interception resulting in a game-winning touchdown. That's just how things are going in the state of Texas, just how things are going.

It could be worse, you could be the Vikings. What do the Patriots do after Randy Moss? They win eight of their next nine while putting a strangle hold on the AFC postseason picture. The Vikings? They've fired their head coach Brad Childress, turned Tarvaris Jackson into a starting quarterback, and if that wasn't bad enough, had their roof collapse just before two back-to-back ghome games that would end their season at the Metrodome. Tough break!
Posted by Lynchy at Wednesday, December 15, 2010