Hasn't it worked out?

Hasn't the BCS as we know it worked out? What questions are left unanswered? The #1 & #2 will play each other for the National Championship. They've been the most dominating teams from wire-to-wire. They've been 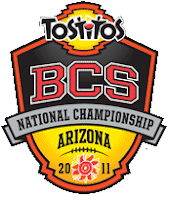 tested in two of the toughest conferences in the country. Come January 10th, the 13-0 SEC champion Auburn Tigers will meet the 12-0 PAC-10 champion Oregon Ducks for the National Championship. Aside from folks in North Texas, does anyone object?!?

For those undefeated, #3 Horned Frogs, consider the National Championship hopes put to bed. It's an issue that will no longer be at the start of the 2012 season when Texas Christian hits the Big East, but for now they just don't have the quality wins their undefeated counterparts do. Oregon hung 50+ points on a #5 ranked Stanford team that lost just one game. Auburn boasts SEC victories against #8 ranked Arkansas, #11 ranked LSU, #19 ranked South Carolina, and #15 ranked Alabama. Texas Christian's most impressive victory, a 40-point win against a Utah team that while ranked #20 in the country was outscored by TCU and (7-5) Notre Dame to the tune of 75-10. I respect how great Gary Patterson's Horned Frogs have been and how incredibly difficult it is to go undefeated, however I'm not about watch them jump two teams from power conferences with the same unblemished record and get a shot in Glendale. Handle Wisconsin in Pasdena, we'll raise an eyebrow.

A humbled Boise State headed to Las Vegas just doesn't sit well with me. When I went all-in with the Broncos, I understood what I was getting myself into. Playing in the WAC does Boise no favors. They can't lose any games, they can't narrowly pull out victories, they've got to win and win big each and every week. So when

Boise State was devastated in #13 Nevada (12-1) the undefeated season, the BCS bowl game, the possible National Championship, it all fell by the way side. However, just for a moment hear me out. The 33-30 victory way back on September 6th against a legitimate BCS heavyweight should mean more. Despite what you think about the Atlantic Coast Conference, Virginia Tech is better than their #12 AP ranking. On September 6th Boise State went toe-to-toe with an eventual BCS conference champion, less than 300 miles from Blacksburg, Virginia and beat them straight up. Yet after a loss to a very good Nevada team, the Broncos are headed to Las Vegas and the MAACO Las Vegas Bowl, nope that doesn't sit well with me at all.

Have you seen Auburn quarterback Cam Newton play? Seeing Cam Newton play in 2010 has been the ultimate college football fans treat. He's been more than explosive, as evidence by the 48 touchdowns (20 rushing, 28 passing) he's posted. He's time and again put the undefeated Tigers on his back and taken over games. In Starkville, in Oxford, in Tuscaloosa, in Atlanta during Saturday's SEC Championship game, Cam Newton and the Auburn Tigers have handled their business throughout 2010. With their

ticket to the BCS National Title game already punched, Cam Newton has some hardware to collect in New York on December 11th. Whether you like or not, excuse me, whether you feel good about or not, Heisman voters have two choices. [1] Make Cam Newton who's been the most electric player in college football since, er . .cough, cough, Reggie Bush, the next Heisman Trophy winner or [2] Don't send in a ballot. If you still want to take a stand on character, don't vote. Cam Newton has been hands down the undisputed best player in the game, and there is no question about it after his performance in the SEC Championship - 335 yards passing, 4 touchdown passes, 73 yards rushing, 2 rushing touchdowns. Nuff' said.

Wisconsin, Michigan State, & Ohio State - you get Roses, Sugar, & 'Bama deal with it! Any time I get a chance to bang on the big, ugly, slow Big Ten conference, I'm taking it. Besides slapping around teams in your own conference, what's so impressive?!? Is it Wisconsin's 20-19 victory at home against PAC-10 foe Arizona State (6-6)? Is it Ohio State's 36-24 win over ACC foe Miami, a team that finished losing 3 of their final 5 then firing their head coach? Or maybe it's Michigan State's win over Notre Dame on a trick play, a Notre Dame team that also lost to Tulsa in South Bend. Oh, and that same Michigan State team had the fortunate Big 10 schedule of not playing Ohio 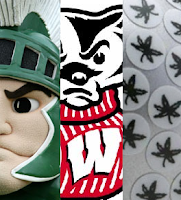 State. You'll get your shots though. We'll see if Wisconsin can go out and hang seventy points on a TCU team that has held opponents to just 11.4 per game in the Rose Bowl. We'll see if big mouth Ohio State can beat a 10-2 Arkansas team in the Sugar Bowl. The Buckeyes got beat up by another SEC team in LSU back in 2007 and Florida in 2006, think they're excited about playing Arkansas in SEC Country ('Nawlins, LA)? Finally, Michigan State will play a 9-3 Alabama team looking to salvage their season as defending National Champions. As good as MSU has been, they've yet to play a team with as much talent as both of the Tide running backs Richardson and Ingram who've now got a month to get healthy. Sure, the Big Ten are represented well in the BCS, but we'll see what kind of conference tehy really are during bowl season.

With over a month before we ready ourselves for the National Championship the ride this college football regular season has taken us on has been a great one.
Posted by Lynchy at Monday, December 06, 2010