Having celebrated three Lombardi Trophies, two World Series Championships, and an NBA Title over the past decade has built up a certain expectation in New England. Unfortunately, all that winning may also have angered the Sports Gods. From Tom Brady's ACL tear two seasons ago to Kevin Garnett's knee injury last season, the Gods are slowly and painfully unleashing havoc on New England sports fan, and it ain't pretty.

As documented in Green With Little Envy, a column I wrote last month, the Boston Celtics are beginning to realize their rapid decent into mediocrity. After escaping with an ugly 3-point win at home against the 21-40 Washington Wizards on Sunday night, the Celtics have dropped each of their last two games. First a

terrible 3 for 13 shooting night from All-Star Paul Pierce against Milwaukee, which led to a two-point road loss. Then, an embarrassing 33-point first half performance against the Grizzlies in Boston. The Celtics ultimately dropped their first game to Memphis since 2006, a 20-point loss to boot. What happened to that Celtics team which refused to lose at home? Over the previous two seasons, Boston had lost a total of 12 home games, amassing a 70-12 record in two seasons. This season? The Celtics are 18-12 in their own building, a far cry from the dominance they just recently displayed. However, even with their home woes, no one is making excuses for a team that is quite frankly just old. Once the youth conversation gets past 24-year old Rajon Rondo,

it ends. Their two most recent losses came against very young teams. Milwaukee puts out a starting five with an average age of 25, including 20-year old rookie stud Brandon Jennings. Memphis puts out a starting five with an average of 24, including 22-year olds O.J. Mayo and Mike Conely. As for the Celtics? Get out your AARP magazines, the average age of the Celtics starting five is 29.8 years old, and you wonder why they can't play the whole game and get dominated in the fourth quarter? We took an NBA Title, but we may have signed over our wish to see longtime Celtics dominance once again. The Sports Gods have spoken.

Forgot about the Red Sox? 'Cause I have. On Wednesday morning the Red Sox announced a ceremonial one-day signing of former Boston great, Nomar Garciaparra. Garciaparra played shortstop for the Boston Red Sox for the better portion of more than eight seasons, and unfortunately never got to celebrate a World Series victory in Fenway. Sure, they awarded him a ceremonial ring after the 2004 championship season, a season 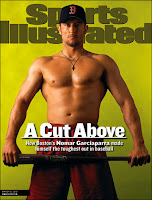 which he played just 38 games in Boston, but did he get rewarded in the same respect as Curt Schilling? Of course not, but for a team which was willing to send standup guy Mike Lowell packing this offseason, the Red Sox were in desperate need of a "good feeling," enter Nomar Garciaparra. Today, the Red Sox are in spring training with newcomers Adrian Beltre, a .265 hitter with only eight homers a season ago, and Mike Cameron, a .250 hitter, these are the Red Sox who had raised two banners? Expect more banners to be raised in the near future? Not likely. With the New York Yankees currently carrying the title of "defending World Champs," and signing big names like Curtis Granderson and Javier Vazquez, are we about to see a return of the past? As we watched the retirement of Nomar Garciaparra take place, is it crazy to believe the retirement of the Red Sox short lived run as front runners is near? When the Red Sox went out and outspent the rest of the major leagues, it worked, and now that their headed an alternative direction, maybe the gods are speaking?

Even the puck faithful, otherwise known as Bruins fans are being tormented. The Bruins, who were expected to be an otherwise cup contending team this season, have gone slightly the other way. The Bruins are now forced to swallow their pride in finding out that center Mark Savard will be out the majority of the season remaining with a

concussion he suffered during the Bruins recent loss to the Penguins. Savard was struck with a cheap shot from Penguin thug Matt Cooke, and the NHL has decided not to punish the Penguins or Cooke for the dirty play which left Savard on the ice motionless. Since returning from the Olympic break the Bruins have been criticized first for the Milan Lucic fight in which Lucic appeared to disengage early allowing the ref to step in between he and Toronto Maple Leaf Colton Orr, and now for their lack fire to retaliate against Matt Cooke and allow the NHL time to determine his punishment. It's one thing to be knocked for not having enough talent or refusing to pay the talent you have, it's another to have your manhood called into question. The Boston Bruins have gone from a team on the cusp to a team on the brink, the gods have spoken.

Between both the Bruins and the Celtics in-season struggles and the offseasons which are leaving something to be desired for both the Boston Red Sox and New England Patriots, questions are really becoming more and more negative toward the Boston sports scene. If the Bean isn't crying yet, she's about to start.
Posted by Lynchy at Wednesday, March 10, 2010