Over the next four days we'll dissect The Field Of 65. Setting you up for bracket dominance, tell your co-workers to tread carefully. For now, this Selection Sunday, we're giving you The Good, The Bad, & The Ugly. First reactions . . .

The story of the 2010 NCAA Tournament could both begin and end with the Big East Conference. Bar none the most loaded conference in college basketball and to prove it they'll be sending eight teams to this years dance. Of the eight teams the Big East is sending, two are seeded (3), two are seeded (2), and Syracuse punched their ticket as a number one seed. Impressed yet? Of the remaining, Notre Dame a (6), Marquette a (6), and Louisville a (9) are no slouches either. The Irish finished the season winning six of their final seven including Big East conference tournament wins

against Seton Hall and Pittsburgh. Determined to reach the tournament, Marquette also won six of their final eight games, including a statement victory over Villanova in the conference tourney. As for Rick Pitino and Louisville, the Cardinals hold not one but two victories over top seeded Syracuse, including a six-point victory at The Carrier Dome. Primed and ready for tournament dominance, each region should advance with caution. In the Midwest Region, (3) seeded Georgetown boasts a record that includes victories over two top seeds, Syracuse and Duke. In the East Region, the Big East conference tournament champion West Virginia Moutaineers, seeded second, have what it takes to knock off a young Kentucky Wildcats team. In the South Region, Jay Wright will try to get his 24-win, second seeded Villanova Wildcats back to the Final Four for the second straight season. Finally, the West Region where the Syracuse Orange will open in upstate New York as the top seed in the region, before hopefully making their way to Indianapolis and the National Championship. The Big East Conference is looking to make a statement in March, if they haven't already.

Tough to be a Boilermaker fan. Winners of their first fourteen games this season, the Purdue Boilermakers looked destined for a deep tourney run. As of February 24th, Purdue sat at 23-3 and eyeing a top seed. After their 24th win, a one-point win at Minnesota, the Boilermakers tourney run looked bleak. Star junior forward, Robbie Hummel, the glue holding together the Boilermakers went down for the season with a torn ACL. Hummel is more than just nearly sixteen points and seven rebounds a game, he's the key to Purdue's defense and makes their offense tick. 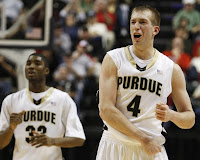 In their big win against West Virginia back on New Year's Day, Hummel went for eighteen points and shot seven of eight from the floor. Since playing without him, Purdue was smacked down by both Michigan State, on their home court, and a near thirty point loss to Minnesota in the Big Ten tournament. Embarrassed by an 11-point first half, Purdue is going to have to recover during the tournament, and it won't be easy. Opening the tournament as a four seed against thirteenth seeded Siena is a tough task. Siena has played tough opponents this season. The MAAC tournament champions already played fellow tournament teams Temple, Butler, and Georgia Tech, Purdue won't be the first tough test for them. Without Hummel, the Boilermakers are about to be upset and watch their tournament hopes end.

While 65 teams await dreams of cutting down Big Dance nets, there are always a few who came up short. In the case of the Mississippi State Bulldogs, they're on the outside looking in. The Bulldogs made their biggest push over the last several days of the SEC conference tournament. On their path to

the championship game, Mississippi State stunned both Florida and Vanderbilt, two teams who got into the tournament on Sunday evening. To take it one step further, the Bulldogs played SEC Champion Kentucky twice this season, once in Starkville and once this afternoon in the conference tournament championship game, and played well. A six point loss back in early February in which Mississippi State pushed a one loss Kentucky team to overtime for the first of two times. Then again, with their backs against the wall, the Bulldogs took it to #1 in the East Region Kentucky, again before losing in an overtime game. For the Bulldogs they did everything they could to make a last push for the tournament, but it seems as though the only way they were getting in was with a tournament automatic qualifier. Their early season losses to the same teams they beat this weekend was all the committee needed to hold the Bulldogs out. An tough loss to Kentucky and then to find out it wasn't good enough, ouch.

For the next several weeks, the country will be focused on college basketball's most elite showcase. Right up there with a weekend at Churchill Downs and baseball in The Bronx, the NCAA Tournament is legendary. . . .GET AFTER IT!
Posted by Lynchy at Sunday, March 14, 2010