How Sweet It Is

Down Goes Frazier! Down Goes Frazier! Or in this case, the Kansas Jayhawks. When the Northern Iowa Panthers stunned the number one overall seed on Saturday night, the scramble began. With the Jayhawks out of the picture and the Sweet 16 set, who will step up and take over?

Judging by the way the (1) Kentucky Wildcats and (1) Syracuse Orange played post-Jayhawk exit, they smell blood in the water. Kentucky roared out of the gate smashing

Wake Forest to the tune of a 30-point blowout. On Sunday morning, the Orange tipped off against Gonzaga and never looked back beating the bulldogs by twenty-two points. Kentucky's super freshman John Wall and DeMarcus Cousins showed up in a big way. Wall scored 14 points and added 7 assists while Cousins scored 19 points to go with his eight rebounds. While leading Syracuse to a blowout victory, Big East player of the year Wes Johnson scored an eye-popping 31 points and got 14 rebounds. For two of the three remaining top seeds, nothing proved they were ready for a National Championship run like a blowout victories this weekend. For Syracuse and Kentucky, their statement victories will put them in the front of anyones short list.

While the Villanova Wildcats were knocked out on Saturday morning, they were the only (2) which saw the exit. (2) Kansas State, (2) West Virginia, and (2) Ohio State all advanced to the round of sixteen with big wins. As their in-state rival Jayhawks were bounced, Kansas State junior guard Jacob Pullen had

other intentions. Pullen drilled seven three-pointers en route to a season-high 34 point performance. For the Mountaineers, on the back of their senior forward Da'Sean Butler, the same senior forward who led them to a Big East Tournament Championship, would watch him go off yet again and drop 28 points, 8 rebounds, and 3 assists. Then the Buckeyes, the team most elated with the fall of the mighty Jayhawks, would drop Georgia Tech in a tough game. Junior guard and possibly the best player in the country, Evan Turner, would dish out nine assists in the game and score 24 points. Led by great guard play and top scorers on each of these squads, the #2's advance to the second round with championship hopes in mind.

Because We Doubted Them

Strong programs, good seasons, and still we said they didn't have it. The (6) Tennessee Volunteers, the only team to bust up Kentucky and Kansas in the regular season are through. The (4) Purdue Boilermakers, without Robbie Hummel, are through. The Pac-10 Tournament Champs, the (11) Washington Huskies, are through with authority.

The (5) Butler Bulldogs, who've been here before and know how to win, moved through. (6) Xavier Musketeers, the Atlantic-10 program which has reached their third Sweet 16 in a row, are back. The Michigan State Spartans (5), attempting to reach yet another Final Four, are through. Heading into next weekend, each one of these teams have proven they can win big games against teams in any conference under any circumstance. Purdue was forced to beat Texas A & M in overtime. Tennessee thumped an Ohio team which shocked Georgetown in the first round. Washington moved through a (3) seeded New Mexico team that many deemed a sleeper in this tournament. Xavier took down a Big East heavyweight in Pittsburgh, refusing to be denied. Michigan State saw their win against Maryland slip away only to steal it back in just seconds with no time remaining. Going to be tough to call any of these teams an easy out into the next round.

St. Mary's (10), Cornell (12), and Northern Iowa (9), you all have our attention now. St. Mary's led by 6'11" Omar Samhan pushed over a number two seeded Villanova squad as their center scored 32 points and flat out dominated.

Cornell isn't any type of team to sleep on, shooting over 50% from the three-point line has helped the Big Red averaged nearly 85 points over the last two victories against Temple and Wisconsin. Then there is of course the biggest shocker because of what they did. The Northern Iowa Panthers defeated the Kansas Jayhawks by wall to wall out playing the overall top seed. Why not their next opponents? What is to stop St. Mary's from advancing? Can anyone stop Ryan Wittman and Louis Dale from Cornell? Is it possible Northern Iowa is just better than every team in this tournament and they proved it by dropping Kansas? Rock Chalk Panther, don't count these guys out just yet.

How are (3) Baylor and (1) Duke on a crash course to play each other in the elite eight and still we're sleeping on them? It's easy, with teams like Syracuse and Kentucky sprinting up and down the court and outscoring their opponents by thirty points, and the Jayhawks 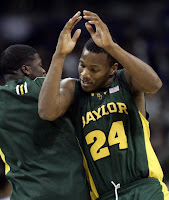 being bounced, we did forget about Duke advancing yet again. Stud guard Jon Scheyer only scored seven points on Sunday, still Duke beats a tough Cal team who got a big win against Louisville in the first round. As for Baylor, with Villanova falling around them, LaceDarius Dunn and Tweety Carter combined for 38 points as they head into the Sweet 16 with a victory over Old Dominion. With St. Mary's up next, it's a big possibility they'll be exposed by the length and speed of Baylor, something the Gaels have yet to see. But still both teams are being slept on. One of these two will be in the Final Four come next Sunday night, we better wake up . . .
Posted by Lynchy at Sunday, March 21, 2010