Preparing to shake the NBA up for years to come, the 25-year old LeBron James is less than four months away from making a career decision that will send shockwaves through professional basketball. From Miami to Chicago, from Cleveland to New York, Prince James' decision where to take his earth bending talent will no doubt have a massive impact on the game. Checkbooks open, LeBron James is about to break the bank.

Cleveland Cavaliers Why the Cavaliers? Because it's home, and that is about it. For seven seasons in Cleveland the Cavaliers faithful have cheered for LeBron and watched him grow from wide-eyed rookie into international phenom. The Akron born James knows no other basketball home than the state of Ohio, and they've got that going for them. Jordan owned The Windy City like Kobe owns Hollywood, so the question becomes: Has LeBron outgrown Cleveland? Yes. Don't fool yourself. The Cavaliers

management may have made a valid effort at retaining his services by surrounding him with talent good enough to win a championship, given their 49-15 best record in the league, it may just happen. Even that can't keep LeBron in Cleveland. As hard as it will be for him, an image conscious athlete as he is, LeBron is bigger than Cleveland. A league which is claiming to lose nearly $400 million dollars this season, can be much improved with their #1 star taking up residence just blocks from their main offices. Not in the Ohio. Like a future celebrities first girlfriend, Cleveland is on borrowed time, because it's only so long before LeBron realizes he needs to be walking the red carpet with someone who photographs much better than Cleveland.

New York Knicks The City That Never Sleeps fits Prince James. Madison Square Garden, Spike Lee, The Big Apple, Basketball Mecca, add LeBron James and it seems to fit very nicely. With Kobe Bryant entering the back nine, it'll be that much more important the NBA holds an elite talent in 1 of the 3 major 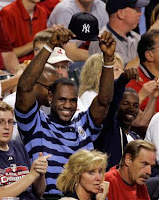 media markets. Is that important? Very, Very Important. The Knicks are known across the continent, it instantly becomes the hottest ticket in town, aside from killing basketball in Cleveland, there is no bad which comes from it. LeBron would own New York, Knicks #6 jerseys would be sold from coast to coast, and in a very short time, you'd see a ticker tape parade for said Knicks, just like the Giants and Yankees in recent years. James would have building size billboards plastering him all over Times Square, he'd be high fiving Spike Lee after the game winning three pointer, he'd be coached by Mike D'Antoni, possibly the games best coach. Let's compare apples to apples, pun totally intended: D'Antoni or Mike Brown? D'Antoni. Madison Square Garden or Quicken Loans Arena? MSG. Statue of Liberty or The Rock N' Roll Hall of Fame? Statue. Whatever Cleveland can give you, New York will double it. This is the type of girlfriend you get when you become the greatest player on the planet.

Chicago Bulls The brunette rocking the leather pants. How sexy is The Windy City? They are a top three media market who has played host to such greats as Michael Jordan and Scottie Pippen. LeBron has moved on from wearing #23 to avoid any problems with moving to Chicago. This is a city which can also support him, hell they already have two baseball teams, a football team,

and a hockey team. He won't be the only young superstar in town, between Blackhawks stars Patrick Kane and Jonathan Toews, they've got plenty. However, the Chicago Bulls set themselves apart with a 21-year old 6'3" point guard who goes by the name of Derrick Rose. Chicago immediately becomes the favorite to win the Eastern Conference with the addition of LeBron James paired with Rose, a 20 points per game point guard. On the other hand, LeBron would have to walk past the statue of a living legend outside The United Center every day. Furthermore, he'd be staring at six championship banners in the rafters and a number that he'll never wear again. Constantly being compared to Jordan, he'd have to have the hardware to to ever reach that level. Does LeBron want that? Or does Prince James want his own legacy that is separated from all of that? As sexy as Chicago may be, LeBron may not ever want to enter that ring of fire.

Sitting on the cusp of one of the greatest careers we may ever see, LeBron James is going to have to make a decision which is life changing. Name another sports story more captivating? Another story which has a bigger impact? A story to follow than will provide as much drama? Sitting on pins and needles, this is about to get more exciting every day.
Posted by Lynchy at Sunday, March 07, 2010