You need a mock, you want a mock. Not so fast. However, LynchyRightNow is going to deliver a tease. With the NFL Combine under their belt, NFL GM's are diving into hours of homework. Tough decisions lie ahead, and huge debates:

What seemed like a non-debate at the end of this college football season, has become the most hotly contested topic of pre-draft season. The 2009 Outland Trophy, Nagurski Award, and Bednarik Award winner Ndamukong Suh, was the no argument lock of the NFL prospects after his performance in the Big XII Championship game. The 6'4" 300lb. defensive tackle 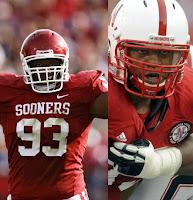 recorded twelve sacks during his senior campaign in Lincoln leading a Nebraska defense which allowed just 11 points per game. Ndamukong Suh turned in one of the most dominating seasons of any defensive player in Big XII history. However, Suh wasn't the only defensive tackle to take the Big XII by storm in recent years, Oklahoma Sooner Gerald McCoy would be the other. Labeled as one of the more aggressive defensive players in this draft, McCoy has fantastic speed and can play against both the pass and rush. Leading the Sooner defense since his sophomore year, Gerald McCoy disrupts high powered passing Big XII offenses on a regular basis. This seems to be the consensus, while Suh is clearly the stronger of the two, McCoy could be the safest choice. A player like Suh who had one mind numbing season, or a player like McCoy who put together quite a college career. LynchyRightNow Pick: Oklahoma Sooner Gerald McCoy, you don't teach experience and that is what McCoy already has. I'll take a guy compared to Warren Sapp over a guy compared Richard Seymour any day.

You know the pedigree. Clausen from a pro-style offense, learning under the same coach who put the finishing touches on Tom Brady. Bradford? Tearing up the Big XII Conference, Heisman Trophy under arm. The question now, whose the better top overall selection? Erase the notion that the #1 pick "won't" be signal caller. The St. Louis Rams can't head into 2010 with no idea where to go under center, plan has to be in place. That plan starts with a young quarterback the Rams intend to groom. So Sam Bradford or Jimmy Clausen? The downside to a big

California quarterback like Jimmy Clausen, his swagger. In college football that works, in the NFL, they take you pile driving into the ground, you've never seen speed come at you harder, and you've never seen corners work you like they do in the NFL. Confidence works in the NFL, arrogance rarely does. For Bradford? He's more accurate, would have been the #1 a season ago had he chose to come out, and has just as big of an arm as Clausen. Unfortunately, he's got a shoulder with major question marks. Multiple shoulder injuries put an end to his season and sent him toward the draft with bigger problems than he could have dreamed. LynchyRightNow Pick: Oklahoma Sooner Sam Bradford, It's about stability in the NFL. Matt Ryan, Joe Flacco, Mark Sanchez, Matthew Stafford, confident and humble quarterbacks. Jay Cutler, struggles, hasn't proven to be a leader of men, that is what Jimmy Clausen is. I'll take injured AC joints over brash, arrogant 22-year olds.

Major questions surround these two athletic beasts. For Dez Bryant, the same guy who has already been compared to Texans wideout Andre Johnson, it's his maturity. For Tyalor Mays, it's his ability. One thing is for sure, neither of these athletes are missing much physically. Dez Bryant stands at 6'2" and has a near 230 lb. frame to support his jaw dropping skill. You tell me if this sounds like an NFL receiver; "Runs angry after the catch and is a load to bring down in the open field, sometimes shows a lackadaisical attitude when on the back side of plays or when asked to block." I think Dez Bryant should fit in 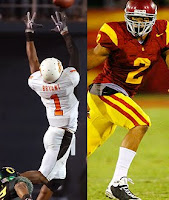 just fine. As for Taylor Mays, the film rarely lies. An extremely dissappoiting senior season in Southern California, Mays has major question marks about his game. Does he fail in coverage often enough, is he smart enought to pick up an NFL defense right away, does his drive to make the big hit cloud his game? All fair questions for the 235 lb. strong safety. However, showing quality speed, record breaking or not, at the combine did alot for the former Trojan safety. We know he can hit, we know he can run, let's put the kid in the right spot, fair enough? LynchyRightNow Pick: Oklahoma State Cowboy Dez Bryant. Personally I don't care if he acts like a five year old off the field, as long as he shows up with that speed and those hands on game day. Period. Dez Bryant could have put up mind numbing stats throughout this season had he not been suspended, but you got a taste. 107 yards per game in 2009, and four touchdowns in just three games. Impressed yet?

Want one more to close you out? The fact that the St. Louis Rams have passed on both Mark Sanchez and Matt Ryan in recent years should give you an indicator as to where they are going. Don't listen to the hype. As Always, Get After It!
Posted by Lynchy at Thursday, March 04, 2010