The #1 overall, a Big East heavyweight, and not one but two Big Ten powers. Welcome to the Midwest Region. You want questions? The Midwest Region has plenty. Which (6) Tennessee will arrive in the Big Dance? The one which got beat by Vanderbilt twice or the one that beat top seeded Kentucky and top seeded Kansas in the regular season. Will Tom Izzo have (5) Spartans Raymar Morgan and Kalin Lucas playing well enough to reach the Sweet 16 for the third consecutive season? With all the young talent in college hoops, will it be the veteran led (1) Kansas Jayhawks who cut down every last net? Game on.

(1)Rock Chalk Jayhawk No? Tell that to junior center Cole Aldrich and senior point guard Sherron Collins. The leaders of this team who've been to a National Championship and have brought the Jayhawks as close as they can get them, now it's up to the others. Collins averages 15 points and 5 assists, Aldrich, the center, is putting down a double-double every night. Why are the Jayhawks the odds on favorite? Because they play defense and move the ball better than most every team in the country. The class of the Big Twelve, Kansas headlines an all-star conference which includes Baylor (25-7), Kansas State (26-7), Texas A & M (23-9), all highly ranked tournament teams which Kansas has at one point or another shredded.

(8) UNLV Rebels Believe it. His name is Tre'Von Willis. His game is tearing up the Mountain West Conference all season long. The junior guard, a transfer from Memphis, is in his second season in Nevada and making an impression. His Rebels finsihed the season fourth in the Moutain West, yet still good enough for an eight seed in the Tournament, in large part to their monster wins. Two victories against a 29-win ranked BYU squad and another victory against 29-win ranked New Mexico. In those victories, Willis averaged nearly 24 points per game. In the early going, UNLV went to Arizona and won a close game proving their road toughness. Remember the name Tre'Von Willis.

(6) Tennessee Volunteers Do I really believe a team which got dispatched on a neutral court in the SEC Tournament to the tune of a 29-point loss actually has what it takes to apply pressure to the Jayhawks? Yes, Yes, and Yes. The Volunteers can say one thing no other team in the country can, they put fear into both Kansas and Kentucky. Having a victory against each of these top seeded squads, albeit on their own turf, means something. Bruce Pearl's young squad is going to have to shake off losses like their most recent and put together beat downs like they did in Starkville back on March 6th. Junior Brian Williams put together a double-double and sophomore Scotty Hopson went for 14 or more in his fourth straight game. The Volunteers are going to have to put together complete games if they want to take some shots in this tourney.

(4) Maryland Terrapins Hear me out, prior to them getting the boot in the conference tourney, the Terrapins had won nine of their final ten and seemed to shake off early season losses to non-conference foes. In their second meeting of the season with the Duke Blue Devils, senior guard Greivis Vasquez scored twenty points and recorded more than a hand full of assists. Can Vasquez' senior leadership be enough to overcome tournament pressure? Maybe, but for a player whose fought tooth and nail for four seasons in College Park, reaching the Sweet 16 would be a huge feather in his cap. In a January 2-point loss at Wake Forest, Vasquez drilled four three pointers en route to a 3o-point night.

(7) Oklahoma State Cowboys That win against Kansas is about as fraudulent as they come. The Cowboys caught a Jayhawks team napping on the road in the first half, and then were outscored by eight in the second half, luckily they did just as much as they needed to do to pull out a victory. L 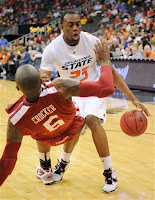 et's be real about Oklahoma State, they were 9-7 in conference and went out of conference against Stanford in a down year, against Utah in a year which they didn't make the tourney, and Rhode Island? The Cowboys needed to do more than lose by 19 to Kansas State in the Big 12 tourney. No way they get past a one and done. (Disclaimer: If James Anderson can carry this team against Georgia Tech, they do have a shot, but it goes through him and him alone. When they beat Oklahoma, he went for 31, when they beat Kansas, he went for 27. Picking up what I'm putting down yet?)

(10) Georgia Tech Yellow Jackets They went 3-6 down the stretch in a relatively soft ACC, if not for their performance in the conference tourney, they'd be perhaps be on the outside looking in. Do we really think a team with a 7-9 conference record, the ACC for that matter, is going to do anything short but roll over? No. The Duke Blue Devils dropped them twice after being upset including in the conference championship game. Sophomore guard Iman Shumpert is going to have to do better than 3-7 with seven points to give Georgia Tech a shot, their performance in the ACC Championship game was another example of how bad the Atlantic Coast Conference was this season.

(2) Ohio State Buckeyes Is Evan Turner the best player in the country? He very well might be. In the case of the Buckeyes, he certainly is their most valuable. In Turner's absence, the Buckeyes are just 3-3, with him they are 24-4. In his junior season, Evan Turner is really putting the pressure on the Big Ten, his points per game up are up by three, his rebounds and assists each by nearly two more per game. Winners of twelve of their final thirteen, the Buckeyes are peaking at exactly the right moment. Averaging 20.3 ppg, 9.2 rebounds per game, and 5.9 assists per game, Evan Turner is a stat leader in nearly every category on his Ohio State team. Wall may be flashy, but Evan Turner is putting up huge numbers. This gives Columbus a very good chance, I think.

(3) Georgetown Hoyas Georgetown is without a question playing well heading into the tournament, but do they have enough? Just 7-6 from since February 1st, the Hoyas are going to have to lean on their stars. Austin Freeman, the junior guard averaged 15 points per game over their last five, when he missed a game against West Virginia, they smoked the Hoyas by 13. Greg Monroe, scoring nearly 17 a game is the reason they almost took the cake at Madison Square. When Monroe scored eight points at Syracuse in late January, they got beat up by 17 points. Stars play well, they have a shot, if they don't, it'll be a quick trip. A trip to the round of 16 seems more and more evident.

and Raymar Morgan, the leadership is there to see Michigan State make a deep run during the tournament. Against both Minnesota and Michigan, Morgan made at least one impression, his game is as far as the Spartans go. Shooting 10 of 15 en route to a 22-point night against Michigan, and shooting 7 of 12 against Minnesota keeps State in it. The glaring concern must be the last month from junior guard Kalin Lucas. Lucas hasn't shot well in nearly a month and most recently shot six of seventeen in a loss to Minnesota. Their earlier season losses against North Carolina, Florida, and Texas hopefully won't be a sign of things to come. Either Michigan State puts on their tournament shoes or they start walking back to Lansing.
Posted by Lynchy at Tuesday, March 16, 2010