Everyone who knows me or follows this column, knows I have a tendency to latch on to certain players or teams in professional and college athletics. To name a few, Red Sox left-hander Jon Lester, Celtics star Paul Pierce, Boston College linebacker and cancer survivor Mark Herzlich. On the team side, the '08-'09 Villanova Wildcats during March Madness, the '07-'08 Xavier Musketeers during March Madness, and more current, the 2009 Cincinnati 'football' Bearcats and heck, the 2009 Cincinnati Bengals!

Now these aren't teams that I'll follow forever or even the players for that matter, but each one of them fits into my specific criteria to becoming 'My Binkie':

(1) Player (X) or Team (X) has to go through adversity, professionally or personally I.E. Paul Pierce playing his entire career in Beantown and wanting to be here, through good times and in bad. Through double-digit losing streaks, through two stints with Antoine Walker, and through the Vitaly Potepenko era. When his number is raised to rafters, it'll be special. (Both Lester & Herzlich are surviving or have survived cancer, but you know that.)

(2) Player (X) or Team (X) has to be unmentioned by most, and robbed of something. I.E. You may know the name Mark Herzlich because he is surviving cancer and fighting like a champ. I cheer for Mark because he had the world by the cojones prior to developing this rare form of cancer. Herzlich is the true 2008 Dick Butkus Award winner, given to the nation's top linebacker. Not Aaron Curry. All do respect to Curry, but Mark Herzlich had a way better season last year. 2008 ACC Defensive Player of the Year, 110 tackles (81 solo, good for 4th in the country), 6 INT's (8th in the country), and 2 returned for TD's (tied for 1st in the country). Robbed of an award, and underrated.

(3) Player (X) or Team (X) has to really grip me, or just be picked by me in a March Madness office pool. The Xavier Musketeers two seasons ago and Villanova Wildcats this past year, were my college hoops sleepers. Xavier reached the Elite 8 and kept me looking smart, and Villanova last season reached the Final Four and awarded me my second straight office pool championship. On the other hand, you have a city like Cincinnati, they've experienced quite a bit of losing with the Bengals. Now in 2009, both their college football team and professional football teams are poised to make a deep run. Anytime a city who was previously left for dead is now awake, i love it!

So you have the criteria. You know both examples of 'my binkie' and how one becomes that. There is no trophy for this, because only I care, but if you've read this far then why not finish it off. Without further adieu, 'my new binkie' is:

Boston College true freshman linebacker, Luke Kuechly. Don't bother searching on google, I'm about to introduce you. I've seen this kid play in person seven times this season, and four times on television, I'm utterly impressed. The circumstances arriving on Chestnut Hill were different for Kuechly than most freshman in their first year of college football. Two senior stud linebackers, Mark Herzlich and Mike McLaughlin, ahead of him on the roster. A head coach in his first year in that role. A defense which just lost its best two interior defensive 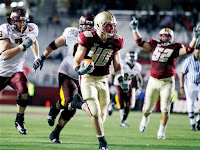 lineman, Ron Brace and B.J. Raji, to the pros. However, after an achilles injury to McLaughlin and the well known story of cancer and Mark Herzlich, Kuechly was thrust into the role as inside linebacker for the Boston College Eagles. Prior to yesterday's loss at home against North Carolina, Kuechly was ranked 8th in total tackles in the country (107) and tied for 2nd in solo tackles (66). Before I go on, Kuechly played his tail off yesterday recording 19 tackles in a losing effort. I want everyone to remember this super freshmans name, because he's that good. For an entire season I watched him play sideline to sideline running down receivers, running backs, and quarterbacks alike. This kid plays with more fire and controlled desire than anyone I've ever seen at that age. A year ago he was tackling high schoolers running the option in Ohio, now he's running down the likes of C.J. Spiller, Tyrod Taylor, and Riley Skinner. Luke Kuechly is number one on my must watch list at this point, and if Herzlich makes it back next season, my head will explode. 'My Binkie'! (Yes, I am a BC season ticket holder and homer, but the kid deserves his due!)
Posted by Lynchy at Sunday, November 22, 2009