For the New Orleans Saints & Indianapolis Colts, it has been quite a nice ride. Both teams boasting 10-0 records through eleven NFL weeks. Both teams presenting fine MVP candidates under center. More importantly, both teams positioning themselves nicely for a deep postseason run. All that being said, by Tuesday morning Mercury Morris and Don Shula will be deep into their glasses of Dom Perignon. Pop It!

First up, the Indianapolis Colts and their week 12 meeting with division rival the Houston Texans. Yes, I'm predicting the Colts drop their first game of 2009 against a reeling Texans squad. Why?!? Glad you asked. For starters, the Texans are just that, reeling. Just two weeks ago 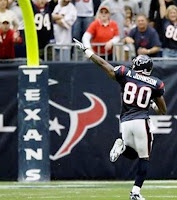 the Texans gave Indianapolis a great scare until a last minute missed field goal from embattled kicker Kris Brown. In that game, quarterback Matt Schaub completed 32 passes including 10 to All-World receiver, Andre Johnson for over 100 yards. Why does this matter? Including that particular game, the Colts defense has allowed three straight 100-yard receivers. It's only a matter of time before the Colts drop a game with that many injuries to their secondary. Furthermore, how many weeks can the Colts tightrope walk against very good teams? The previously mentioned Kris Brown missed field goal, the now infamous Bill Belichick 4th down call, the late interception on a driving Joe Flacco, it's about time the Colts luck runs out. The Texans have the weapons to do it and a defense that can cause Peyton fits. Prediction: Houston 34 Indianapolis 24

The New Orleans Saints may just be that good; However to be the best, you've got to beat the best. Have you seen Tom Brady & Randy Moss recently? Saying they've got their swagger back would be a gross understatement (and only adds to the amout of times the word "swagger" has been used in 2009). Over the past five games, Randy Moss has caught seven touchdown passes and is averaging 111 yards per game. Funny 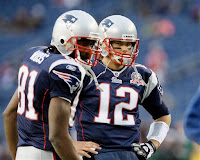 thing is, that is still 13 yards shy of what Brady's favorite target, Wes Welker, is doing (124 yards per). The Saints are going to have to do better than they have as of late. Sure they've beaten St. Louis and Tampa Bay in the past two weeks, but New England is on an entirely different planet than those two. The New Orleans defense has given up 20+ in five of their last six games, shootouts don't go so well when Tom Brady's offense is who your going up against. While Drew Brees has these Saints ready for greatness, a win against New England would elevate them to new levels. Unfortunately that won't happen. The Patriot defense is better than adverstised, ranked sixth in passing yards allowed per game and second in total points scored per game. Prediction: New England 35 New Orleans 20

The NFL is an incredibly tough league to go undefeated in, from week in and week out anything can happen. The Broncos went from 6-0 to 6-4 in a flash. The Raiders lose to the Giants 7-44 and come back to beat Philadelphia a team which beat the Giants 40-17. If it doesn't happen this week for Indianapolis & New Orleans, mark my words it'll happen. Have a great Thanksgiving! Gobble Gobble!
Posted by Lynchy at Wednesday, November 25, 2009