Gut Check Time! You've won a game or two, you look like your in line for the big time, and now you've got to get over the hump! For Alabama, Oregon, and Clemson, big time bowl games are around the corner, don't rest on your laurels!

This is it 'Bama! The Alabama Crimson Tide are aware that it's either them or the Gators of Florida that will be representing the SEC for college football supremacy come January. The Gators currently sit atop the BCS and boast two statement victories, ( at LSU and a 41-17 blowout v. Georgia ), now it's 'Bama's turn.

3:30 in Tuscaloosa, Alabama. The Tide get those pesky Bayou Bengals coming in, beware. Terrance Cody and the 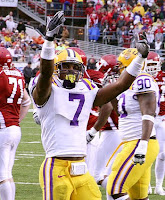 Alabama defense will have to carry a struggling Tide offense. Over his last three games, junior quarterback, Greg McElroy hasn't thrown a touchdown and only completed 43 of 83 passes. I'll say it now, this LSU secondary is the wrong team to get back on your feet against. A top 25 ranked secondary with 11 interceptions, Patrick Peterson and Jai Eugene will be waiting for McElroy come this afternoon. This LSU defense doesn't allow points, over the last four games the Tigers have held opponents to just 6.5 ppg., which includes Auburn, Florida, Georgia, and Tulane. Alabama's Heisman candidate, Mark Ingram (1,004 yards & 8 TD's) is going to have to go out and win that trophy, no one is handing it to him! Pick: LSU

playing for keeps, scoring 40+ in four of their last five games, so what should be different now that the Ducks are leaving Eugene? The fact that Stanford is 5-3 and essentially will be playing their national championship this afternoon when this high powered offense rolls in. If Oregon wants to make a case that they are in fact better than a Boise State team who handled them in week 1, they've got to win games like this in non-dramatic fashion! Freshman back, LaMichael James is going for 1,000 yards in just his seventh starting game. Put his numbers alongside Alabama's Mark Ingram and it's tough to argue he too doesn't have a shot at The Downtown Athletic Club. Careful Ducks, you need to blow out Stanford in their place! Pick: Oregon

7:45, Welcome to Death Valley. All eyes on the ACC. After a more than tumultuous start, the Seminoles are alive after their dramatic wins in Chapel Hill and against N.C. State a week ago. With essentially nothing to lose, I fully expect the 'Noles to deliver us a fantastic evening in Clemson's Death Valley. That being said, a wide open Heisman race should light a fire underneath possibly college footballs

most explosive talent, Clemson's C.J. Spiller. The Clemson senior has recorded over 550 rushing yards and 250 receiving yards. However, this back shows his importance in the return game even more. Spiller has over 450 yards returning punts and three touchdowns, he's flat out dangerous with the ball in his hands. If you had to put your finger on one thing in this ACC showdown, it'd be the injury to Clemson man child, Da'Quan Bowers. The Tigers defensive end is doubtful to play this weekend and missing a 6-4, 275 lb. pass rusher who had already recorded 25 tackles including three sacks, isn't a good thing. For Florida State signal caller, Christian Ponder, that is a good thing. When staying upright, Ponder is very good and can cut up secondaries. In a big road win at North Carolina, Ponder dominated going 33 of 40 with 395 yards passing and three touchdowns, just a week after throwing five touchdowns in a loss to Georgia Tech. The 'Noles are lurking. Pick: Florida State