The NBA Draft doesn't come with as much fan fare as its' NFL counterpart. For starters, it's held just two weeks after the complete of the previous season. We haven't even had time to breath before an entire crop of new talent is pumped into the NBA. The trades are a bit more often, a bit more complex, and a whole lot more boring. However, it's a draft and like women with big . . .eyes, I'm always interested. In T-Mobile fashion, here are our "Fav. Five" of the 2009 NBA draft. (This won't include consensus #1, Blake Griffin)

(5) Jeff Adrien, PF Connecticut This Husky won't be a first round selection, and yes we love him. For all the words we've been forced to eat, our remarks around the potential career of current Celtic, Glen Davis, had to be the toughest. Davis was an undersized big man in the college game, lacked a consistent jump shot, and for all intents and purposes, should have been a non-factor in the NBA. Fortunately for him, he has become a dynamic role player for the aging Celtics and continues to improve his game from night to night. While smaller than the 6-9 Davis, Jeff Adrien brings that thunder ability to the position of power forward. A double-double machine at UConn, Adrien found ways to dominate in the paint while playing in a tough conference. In the NBA, his 240lb. frame will do wonders for him physically. Like Davis, Adrien doesn't have the ability to maneuver himself into a small forwards role and will have to develop a reliable outside shot, similar to what Glen Davis sunk the Magic with. I like Adrien for what he's known for best, his hustle and scrappy play. For someone whose 5'10" and 175 lbs. scrappy doesn't count, but for someone with six more inches and nearly 70 pounds more of muscle, scrappy results in rebounds, loose balls, and added possessions. He has work to do, quickness, that shot we discussed, and the ability to face the basket in the post, but Jeff Adrien is used to playing undersized, he'll do more than you expect. Ideal landing spot: Utah

(4) Sam Young, SF Pittsburgh Some players are just better than experts think, Sam Young is one of those players. The explosive senior year of Sam Young launched him on to the national stage. The 6'6" small forward has a mean outside shot with outstanding defensive ability, your in between guy who will be asked to cover the leagues elite, similiar to that of Magic star rookie, Courtney Lee.

Sam Young is currently projected to come off the board in the late selections of round 1, but as far as athletes go it's hard to see him slipping past mid-first round. One of the more dangerous players in this years NCAA tournament, Sam Young can score from a variety of areas on the court. Attacking the basket, behind the arc, and he even has a smooth mid-range shot. Young being 24 years old helps him out more than we think, he's a more mature rookie and should be able to adjust his game to the pro level very quickly. If he's asked to extend himself on the defensive end, he can do that. If he's asked to man up on quality players, he can do that. If left open, Sam Young can develop into a knock-down shooter. For a player who expects to be drafted by a cusp team, Sam Young could play the role that Courtney Lee played just a year after being selected in the later portion of round 1. Ideal landing spot: Dallas

(3) Tyreke Evans, PG Memphis Any player who was allowed to focus on just hoops and not school (act like Memphis required he studied) for the last year, I'm all about. Evans is the hands down most explosive point guard in this draft, put me on record. However, he isn't the best point guard and I'd argue he isn't in the top three. Let's get the bad right out of the way, 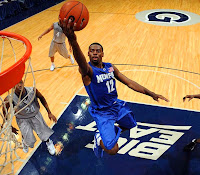 his jump shot, it needs work and that can get better as his career goes forward. Back to the good. Evans is a take control point guard, he'll score first and pass second, he'll work his way to the free throw line and doesn't mind heading into traffic. His ball handling skills are fantastic and if you haven't seen them, you will soon. Evans is a top 15 draft pick, no bones about it. The issue with Evans is he needs work, his play will have to become more orthodox and he'll need to look to pass if his jump shot isn't where it needs to be. If our high-water mark for point guards his Rajon Rondo, Chris Paul, and Deron Williams, Tyreke Evans has to develop some things they possess. Fantastic outside shot (CP3), outstanding court vision (Williams), and the ability to drop your jaw every time down the court (Rajon), those are the things Evans game needs to develop into. He's this good and only 20-years old, teams at the top are going to decide if he has what it takes, before he's off the board. Ideal landing spot: New York

(2) Gerald Henderson, SG Duke I love ACC basketball, so there was no way you were going to get out of this without hearing me prop up at least one ACC stud. Without a better shot, Henderson will be a perfect defensive tool for teams looking to add role players who can both defend and score. DraftNet puts Henderson in a Latrell Sprewell mold, I'm not

that kind. However, I do think that Henderson plays with that level of intensity that brings his best talents to the forefront, athleticism, quickness, and strength. As far as athletes go, Henderson is among the top in this draft. The thing I love most about his play is his ability to attack the hoop, something not many Duke players have had recently. We shouldn't leave out Henderson's size, he's a generous 6'5" and only 215 lbs., without a jump shot can Henderson get his points in the NBA? We'll find out. Teams missing a slasher type who can score and take charge of a second team or even start need a player like Henderson. All that physical ability needs to be reigned in at times to play in a more team setting, but as high in the draft as we think he's going, the team may not mind him attempting to take over a game. Ideal landing spot: Minnesota

(1) Ricky Rubio, PG DKV Joventut (Spain) We're not stretching with a 19-year old foreign born point guard. Yes, the chips are in the center of the table when drafting such a young player with relatively limited exposure. Like in poker, you can only win what you put in the middle, and this point guard is worth

every chip you put in. Ricky Rubio has played against the best the world has to offer, the 2008 summer Olympic games. Ricky Rubio has played with some of the worlds best, namely Pau Gasol. If your looking for proof just look him up on YouTube, if your looking to take my word for it, he'll instantly be a top 5 passer in the league within 3 years, BANK IT. Rubio's non-stop style of play can be seen at both ends of the floor, his head is constantly up and rarely do you see a player with court vision like Rubio has. From his defensive prowess to his decision making skills, I wouldn't be shocked if heavy hitters tried moving up in this draft if Rubio slips. Here's the final call on Rubio, if he is the next Steve Nash, the next throw his team on his back and win two consecutive MVP's, do you take the risk on passing him in a thin draft? Of course not. Ricky Rubio is the most elite point guard in this draft and I'd take him VERY high, without caution. Ideal landing spot: Golden State

I'm no genius (at least I only claim not to be) but these five players could make heavy impacts on their team over the next few seasons and I'd be somewhat surprised if they all missed. NBA Draft, where over hype happens.
Posted by Lynchy at Wednesday, June 17, 2009