Like ridiculous motor vehicles turning into laser shooting robots in Transformers, LynchyRightNow and The Right Now Podcast is ridiculously evolving into NBA draft mode, well continuing in NBA draft mode is more like it.

The fans have been actively writing in questions about the NBA draft and what to expect on Thursday night, so we're going to please them and give them what they need . . . . (a wind bag blogging about his obsession with sports) WILL DO!

You, a diehard Celtics fan and clear fan of point guard Rajon Rondo, what is going on with every rumour surrounding trading this break out player and attempting to snatch a rookie guard like Flynn, Evans, and even Rubio? -Mike, New York

Too smart for their own good. That's it. It isn't Rondo's play or the fact that he is going to cost the Celtics major dollars in another year, it's their stubbornness. Maybe Rondo is tough to coach, and maybe he's even somewhat of a diva in the locker room, it's worth it. Paul Pierce, Ray Allen, and OF COURSE Kevin Garnett are on the back 9 of their career with few holes left to play. Rondo however, has barely tee'd off. In a year or two Rajon Rondo is going to be the player that lures 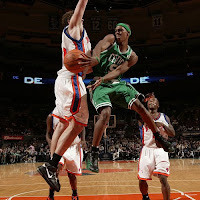 a knock-down jump shooter to Boston, or brings in one of those big-time free agents next summer, not PP or KG. He's one of the top 3 point guards in the game today, if your not a homer, he's top 5. Premier court vision, long range on defense, and oh yes, he slapped the Bulls down on his own. To play Devil's Advocate if you can't pay Rajon and you feel you can get better than him, you take the chance when you have gas remaining in the tank of Pierce and Garnett. You take the chance if you feel getting big to beat Orlando is the better position to be in. If you could get a premier guard prospect, you go 1 way: 6'7" Playmaker, Tyreke Evans. Evans knows how to battle and came from the book of John Calipari, Derrick Rose is doing alright, right? But he's the only one you make a play for, because he's the only one your selling to the legions of Banner 17 wearing fans, bank on it.

James Harden. You can't teach the size that Thabeet possesses. I'm all set with a player compared to Delonte West and Cuttino Mobley. I don't buy that Harden is the best 2-guard in this draft, Steph Curry and Gerald Henderson would

still be available. Before we smash on Hasheem Thabeet and bring up guys like Greg Oden, slow down. Thabeet has only been playing hoops since he was 15, that's 7 years people. Furthermore, who cares if he's soft right now coaching can fix that. If Hasheem Thabeet can average four blocks a game and rip down boards in the pros, then he's doing his job. If your the Cavaliers and just watched Dwight Howard have his way with you, aren't you wondering what can you possibly do to combat that? Hasheem Thabeet blocking shots and occupying space is the answer. Before Lionel Hollins locks in on fellow Sun Devil James Harden, you better think twice about Hasheem Thabeet because with O.J. Mayo and Rudy Gay, you've got enough offense. Thabeet is the #2, like it or not.

Can Steph Curry be the King of New York? Or is he just holding the crown while LeBron plays out the string? -Ray, Bronx

this before you can say WOW! Stephen Curry is the next Ray Allen and in New York, Steph Curry would be on a whole separate level of greatness. Curry plays with Ray Allen like ice in his veins, smooth and confident with every shot. If your a Knick fan you hoping that Minnesota and Golden State ignore what Stephen Curry can be, your hoping that Steph Curry is the piece that lures LeBron to New York, and NO that rumour isn't dead. Curry is the most interesting pick in this draft and has been for some time. In three seasons at Davidson, after being passed over by both North Carolina and Duke (located in the same state) Stephen Curry has increased his scoring and feared no one in doing so. Asked to play the point, no problem. Asked to play the two, no problem. the Knicks would be hitting draft gold if they could attach Steph Curry to Madison Square, but he won't be there. Sorry!

Who are sleeping on Lynchy? There has to be one player in this draft who everyone is sleeping on, right?!? - Billy, Milwaukee

Yes, and even though we've revealed in The Right Now Podcast someone better Carolina point guard, Ty Lawson. There is no reason that Ty Lawson can't make an impact on draft day. Lawson has championship pedigree,

start talking about him. plays injured and with a motor that has no quit, face it, another Carolina kid is just as impressive as advertised. Ty Lawson is more accomplished than any point guard in this draft, and that shouldn't go ignored. For everything you want to put on Flynn, Rubio, and Evans, Ty Lawson is more of a sure thing than any of them will be. Lawson is 21, older than each of his fellow point guards previously mentioned, and more of a mature basketball player with a better court IQ. The Carolina point guard is the only one of the four to have won anything, and knows what it takes to get it done. For all the upside of a 6'7" Tyreke Evans and an unpolished look of 19-year old Ricky Rubio, Ty Lawson might just be the far and away best bet, don't be stunned when someone else knows it before you.

Come on, admit it. There is buzz around Tar Heel Tyler Hansbrough. We know you won't come forward but at least give the guy his due. -Anthony, Myrtle Beach

*$&%&#@$!&*(%, happy? That was me yelling obscenities about you and your notion that I would acknowledge Tyler Hansbrough as having "buzz"! I won't do it, I've put my eggs in a similar basket (UConn's Jeff Adrien) 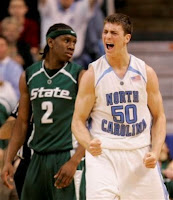 and you can't take that away from me. Maybe hustling got you a good name in the college game, but in the NBA all it does is get you smack down. I'm a competitive guy, and if you threw a jersey on me I'd try really hard too, so NO that doesn't make Tyler Hansbrough "special." Look, some guys are just very good in college and that's all they're going to get, wa, wa, wa . . keep crying! Get a good jump shot, post game, and bring the thunder to a couple guys who matter then we'll revisit your NBA success, till then? FORGETTABOUTIT!

Your focused on the draft, we get that. What is the most interesting thing about the 2009 NBA Draft for you as a fan? - Rich, Baltimore

How does Baltimore a.k.a. Charm City not have an NBA team? That puzzles me. You give the Wizards to Washington and the Nets to New Jersey, yet Charm City looks like it's ugly step child, ugh! MOVING ON! Rich, I'm most excited about the possibilities. O.J. Mayo ending up on Memphis. Kevin Durant exploding in OKC. Darko being taken over Carmelo. That's what I'm excited for. Being proven wrong about Glen Davis and being proven right about J.J. Reddick. Finding the guys with the A+ skill set, showing the guys without it. The NBA draft provides one thing no other draft provides, A THURSDAY NIGHT WITH THE FOUNDERS! HaHa. Richy, stay tuned and get excited, when your wife tells you to set the table tell her where your headed. TV Land and the NBA Draft, tell her you've got a duty to full fill. It's the NBA Draft, where out of your mind happens!
Posted by Lynchy at Tuesday, June 23, 2009