Keep It Real: The Digital Takeover

Another segment of Keep It Real Friday is coming at you . . . BOOM! We're talking sluggers who use the juice, the Kobe chronicles, David Stern and the NCAA, and of course I couldn't leave out the Yanks 8th straight loss to a team in Boston. You guessed it, time to KEEP IT REAL!

Raul don't blame the blogger, blame your fellow sluggers. I'm not saying the blogger was correct in questioning the validity of the major leagues leading home run hitter Raul Ibanez, but the question CAN and will be asked. The Phillies power threat has just drilled his 21st homer of the season, a season which is only 57 games in for Raul Ibanez. Throughout his 13-year career Ibanez has passed or matched that feat only five other times and that was while playing in far more 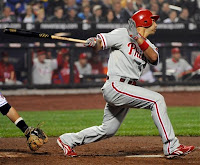 games. Yes Raul is now playing in a more hitter friendly ballpark, and yes he is being protected by the bat of Ryan Howard, but aren't we right to question major power surges given the times we live in? Haven't the fans or bloggers at least been granted that right given the events which have unfolded around our favorite sluggers? I'm not asking for Raul to bend over and give us a sample of any and every bodily fluid so we can accurately test for a band substance, I'm just asking him to slow down before he tears into suspicion with this vitriol. Don't blame me for asking that question Raul, blame your fellow power hitters like Barry Bonds, Jason Giambi, Alex Rodriguez, and not limited to but including Manny Ramirez. The failed drug tests, the BALCO Laboratories investigation, multiple New York Times best selling books, this is why we've earned the right to ask questions, and this is what Raul will have to get used to if he plans on attacking the records of those same players. You may not like it but the bottom line is where there is smoke, there has often been fire. KEEP IT REAL!

Let the coronation begin, the Magic were doomed from jump. Kobe Bryant will raise another banner into those L.A. rafters, that you can bank on. However, at LynchyRightNow we're openly admitting we should have called this series alot sooner than post game 4. Not because Kobe or Phil wanted another ring more than the Orlando Magic, but because they are 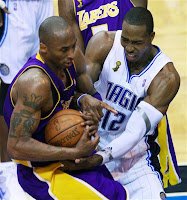 just better than the Magic. At no point in this series was Orlando "in control," between Stan Van Gundy attempting to inject Jameer Nelson into a roster he hadn't participated in since February, to the Magic never getting in a consistent shooting rhythm, the Lakers were just too much. From Pau Gasol and his double-double performance in game 4 to Orlando's Rashard Lewis shooting 2 of 10 from the floor, the Magic are d-o-n-e. The most boring NBA Finals in years will soon be over and these NBA Playoffs will be known as the year Kobe got lucky, lucky Kevin Garnett got injured in March, and lucky the Cleveland LeBrons decided to fold up prior to the Eastern Conference Finals. As for Stan Van Gundy, your Magic have won their last 7 games when point guard Rafer Alston plays 30+ minutes or more, and lost their last 5 when he plays less than 30 minutes. I see it, why can't you? Keep It Real!

Wake up in the morning and ask yourself, could it get worse? The Yankees had already lost two straight in this series and seven on total on the season. All night they had struggled and gone scoreless off of Boston starter Brad Penny. The seventh inning comes around and they are down 0-1 before they rally to score three runs in the top half of the inning off of reliever Manny Delcarmen. Bottom half of the seventh goes well, Yankee ace C.C. Sabathia has only allowed a

homerun and barely any other hits the entire game. Then, the Red Sox touch Sabathia for 4 runs in the bottom half of the frame to take a 4-3 lead. Victory looked likely, however through the rain the New York Yankees continue their season long slump against the Red Sox and fall to two games back of the division lead, that's got to hurt. More so, your ace throws a great game and when he falters the bullpen is no where to be found, the bigger problem. By the time Jonathan Papelbon had stormed in from the bullpen en route to his 16th save, this one was over and the Yankees were on the bus back to the Bronx after yet another embarrassing sweep at the hands of the Boston Red Sox. Maybe it isn't in their heads and this is just a game to them, but at what point does pride take over and the Yanks pull one of these games out? It better happen soon because as the way it looks right now, the World Series goes through Beantown. KEEP IT REAL!

As for the coaches? Nothing. So, Tim Floyd willingly steps down as head coach of the men's basketball program at Southern California amidst allegations of NCAA violations surrounding his one-and-done star, O.J. Mayo. Months after John Calipari ditches Memphis for his new digs in Lexington, the Tigers are in it for NCAA rules violations. A loss job in one case, a new job in another, but what about the schools and the players who play for those schools? They may suffer infraction penalties 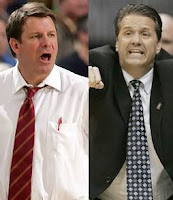 such as wins being vacated and scholarships being lost, but other than a firing or a "stepping down" in Floyd's case, what else can happen? Nothing. NBA commissioner David Stern enforces a one-year rule for high school seniors prior to their eligibility to enter the NBA draft and who suffers? Not him. The college game, recruits know they'll be taking classes for just one semester, at that point what are coaches left to do, bid for the high school player? Exactly. Rather than inspecting the process and putting bans on a program which other players belong to and may be doing it "the right way" why don't we step in and fine these coaches and work something out with the NBA? The collegiate basketball system has become so flawed when it comes to recruits and it is only a matter of time where it changes the game for good. I saw Blue Chips, the system needs to be changed, KEEP IT REAL!

Thanks for reading Keep It Real Friday, for more LynchyRightNow action you can check out The Right Now Podcast and also find us on Twitter, Thanks again and as always! If you don't know, now you know.
Posted by Lynchy at Friday, June 12, 2009