With action on the ice and the hardwood coming to a peak, I've purposely placed baseball talk on the proverbial back burner, that is until now. . .

The return of base stealing couldn't be more exciting. First Boston's Jacoby Ellsbury nabbed home plate then Philadelphia's Jayson Werth played copy cat and grabbed home as well, those were the eye catchers. Tampa Bay's Carl Crawford (33 Steals) taking 6 bags, only the 4th player since 1900 to do so

in a single game. Now it is time to pay attention to whose on first and who'll be on second. No longer is Angles manager Mike Scioscia the only guy in the majors willing to push the issue with men on base. Coupled with the decline of the power hitting (due to enhanced PED testing) and traditionally power laden lineups being injected with speed guys (pun totally intended) the major leagues elite slugging teams have become threats on the base path. Texas Rangers are 4th in the majors in stolen bases, leading the AL West. Red Sox and Yankees are 8th and 9th, tied for 1st in the AL East. Philadelphia is 6th, leading the National League East. The Mets and their lineup of sluggers, 3rd in the league in stolen bases. Joe Madden and Mike Scioscia have had the playbook first, but now the entire league has caught on and giving baseball the excitement it needs. Judging by the reaction of the fans, chicks love the long ball, and swiping home.

The Yankees are reasserting themselves. If losing 5-straight to the rival Red Sox was their low water mark, then pulling themselves up and going 16-5 from May 13th till today would be the high water mark thus far. 1st baseman Mark Teixeira 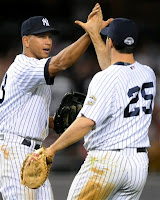 has been on a tear since his slow start in April. From May 1st through the end of the month the slugger drilled 13 homeruns and drove in 34, reminding all of baseball why he was one of the hottest commodities of the offseason. Coupled with the turn around of Teixeira's bat, the arrival of Alex Rodriguez and his 7 homers with 21 RBI's in just 25 games, the games most feared offense may be reasserting themselves in Big Apple fashion. It may be hard to argue that a fresh A.J. Burnett and C.C. Sabathia along with veteran Andy Pettitte is no worse than the third best staff in the American League, folks that puts you in the playoffs. The team which once had the look of doom around them sitting behind both Boston and Toronto in their own division now has a record second to none in the American League. Funny how things change like that.

You can have Greinke and Santana, I'm taking Doc. I'm comfortable letting you know that Roy Halladay is the best pitcher in the major leagues, prove me wrong. The major leagues leader in both wins and innings pitched through two

months is Roy Halladay. In six starts in the month of May, Halladay was 4-2 with an earned run average south of two. Those games weren't against soft opponents either, statement games against the Yankees, Angels, and White Sox, reminded the American League of who their most feared pitcher is. It's possible Halladay would be front and center if he played stateside, but he's got some ideas on how to make us talk about him. June 2nd, the Jays right hander goes 9 innings in a 6-4 victory over the visiting Angels, walking just one batter and striking out 14. The Denver born Halladay pitches in a division that includes such horses as Beckett and Sabathia, and he's the one batters like Pedroia, Youkilis, Rodriguez, and Teixeira fear most. The Jays won't be around much past this June, but keep your eye on Roy Halladay, the true Cy Young. The same pitcher that had over 200 k's and 20 wins in 2008 is aiming to turn in another dominating performance this season, just cross your fingers and hope you meet the Jays when Doc isn't staring down at you.

Try to map out the A.L. Central, I can't. That Cleveland team was supposed to put up a better fight than they did in 2008, finishing 81-81 just a year after they pushed around the Yankees in the 2007 postseason. Well they haven't and currently are 10 games under .500 and 10 more losses away from a fire sale, if they aren't there already. That Kansas City team that came out looking good lead by the 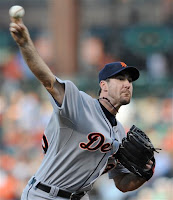 Cy Young candidate, Zack Greinke, the proceeded to lose their last seven games and ho hum they'll finish in the cellar. The Twins win three, lose two, win two, lose three. Then all of a sudden they'll make a playoff push just weeks before the season ends. How about the Twins be the best team in the Central from wire to wire, no really just try it. The White Sox 3-year World Series hangover is getting old, Ozzie's act is getting old, and if you like cheering for a team in the middle, the South Siders are your team. Finally we hit the resurgent Detroit Tigers, aside from their recent tail kicking at the hands of the Boston Red Sox, the Tigers have looked great. Justin Verlander is looking like the guy we saw win 35 games combined in '06 & '07. However, the Tigers don't have the starting pitching like other top dogs in the American League, and furthermore what questions should be asked of a team who gets handled by a fellow division leader on their own field like the Tigers just did? If a team out of this division plans on making some noise, I think we have to wait and see where they'll come from, because I could see the Indians rip off 15-straight wins and surprise, they are back. (Safe bet is on the slow and steady Twins, just a hunch.)

Could the Rangers really pull away? The 3 and 1/2 game lead that the Texas Rangers have built in the American League West may be slightly misleading. Seattle and Oakland have more problems that a math book, the Rangers are 10-3 against them so far this season. However, against division leaders New York, Boston, and Detroit, the Rangers are just 2-10. To put it bluntly, the

Rangers don't have the pitching to let them carry this string out, especially in a division that includes the Angels who are just now finally getting healthy. After coming off a three game set against the Yanks, the Rangers head to Boston then get Toronto, the Dodgers, and Astros, we'll see how well they pull this off and if they are still in first. If you want a good read on how they have carried it to this point, behind Michael Young (hitting .338) and Nelson Cruz (16 homers, 41 rbi) the Rangers offense has survived without injured star Josh Hamilton whose played in only 35 games hitting .240. The Rangers don't have one thing the other division leaders have, an ace. While Kevin Milwood and Brandon McCarthy are formidable big league starters, a veteran in Milwood's case, they don't have a Josh Beckett, a Justin Verlander, a C.C. Sabathia, and that'll be the downfall of this club. In short, the Rangers will stick around for a little bit, but don't expect a division title.

. . . If you've noticed the absence of National League discussion, it was intended. Four of five N.L. west teams are .500 or worse, talking Cardinals and Brewers is interesting to no one, and the east is as predicted; Phillies, Mets, Braves, Marlins, and the lowly Nats. Mid-summer classic is just two months away and by then we'll have kissed the cup and hoisted the Larry O'Brien raised, all eyes back on baseball.
Posted by Lynchy at Friday, June 05, 2009