It's time we stop calling this a rivalry right? 7-0 this season, treating the Yanks like whipping boys, it's scary how good the Red Sox have looked in this rivalry. No talking NBA Finals, no talking Stanley Cup Finals, we've locked in on Sox v. Yanks and the best rivalry in sports. (stop it Duke and Carolina fans)

As currently constructed, this version of the Boston Red Sox may be better than we've seen over their current run which has resulted in four trips to the ALCS and two trips to the World Series. Be prepared for it to only get better.

Tim Wakefield is as dominant as we've seen. While both of Boston's expected aces Josh Beckett and Jon Lester have turned it on as of late, it was Tim Wakefield holding the Red Sox staff together through the first month 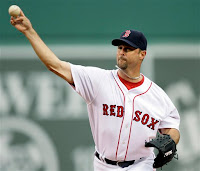 and a half of this season during their struggles. In 9 of Wake's 12 starts he's managed his way through at least six innings and through seven innings four times. Some wouldn't dare use the word "consistent" to describe Tim Wakefield and the knuckleball, but in 2009 that is exactly what it's been. After notching his 8th win of the season last night (which gives him the second highest win total in the majors), it's hard to argue that Wake isn't going to continue his success. With Beckett and Lester hitting their stride, Tim Wakefield approaching 10 wins before the All-Star break, can you argue that there is a better staff of starting pitchers in the majors? Maybe that is why the Red Sox boast the best record in the American League and have just dropped the Bronx Bombers for the seventh straight time.

Ellsbury is setting the table. One of the major questions surrounding the Sox prior to the start of the season, would Jacoby Ellsbury turn it around after his less than stellar 2008? Would Ellsbury be able to get on base for reigning 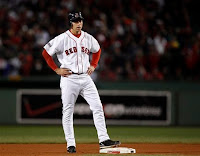 American League MVP Dustin Pedroia and Kevin Youkilis? The answer, yes. You know about Ellsbury stealing home plate on the national stage that is Sunday Night Baseball, but what you might not have realized is that Ellsbury is in the midst of having his best year in his short career. Ellsbury is currently ranked among the American Leagues best in both batting average and hits. Gone is the player who hit just 155 hits in 145 games last season, in his the player whose already approaching 80 hits in just his first 50 games this season. The leadoff hitter in the Sox lineup is more important than ever, with hitters like Youkilis and Pedroia batting behind him, that leadoff guy is bound to get driven in and give the Sox the best chance to win. Ellsbury seems to have brought his hitting up to par with his base running, anyone who knows these Red Sox know that if Ellsbury can not only get on base but also get in scoring position, it's scary how successful the top of their lineup can get. Pssssssttttt, Jacoby has 23 steals, good for second most in the majors.

The pen is scary deep, and they'll only get better. Yes, Jonathan Papelbon hasn't looked as dominant as we remember, 128 saves over four seasons will do that to a closer. Fortunately for the Sox, the rest of the pen that Theo Epstein has constructed couldn't be pitching better. Hideki Okajima, Manny Delcarmen, Takashi Saito, and Ramon Ramirez are pulling together the best pen in the majors,

bar none. Okajima has fanned 29 batters in just 26 innings, including three k's last night when the Yankees had the go ahead at the dish. Manny Delcarmen has allowed just three earned runs in 25 innings pitched, that'd be an earned run average of 1.07, filthy. In Saito's last ten outings he's allowed just one run scored off of him, shutting down hitters to the tune of 19 k's. Despite the two bombs Ramon Ramirez gave up last night, he's been the horse of the stable in 2009. Pitching more innings than any of the horses in the Sox pen, Ramirez has an earned run average south of 2.00 and a WHIP south of 1.00, it's scary that this is the guy they got in exchange for Coco Crisp. With flame throwing minor leaguer Daniel Bard joining the bullpen full time at some point this season, (11 major league innings, 10 k's) the Sox bullpen is bound to get only better.

Ramirez who? Bay's contract year, just want they needed. Outfielder Jason Bay is making it very easy for us to forget about the star slugger who is currently suspended for the use of a banned substance. Jason Bay is leading the major leagues in runs batted in, he's tied for 9th in long balls, and is a top 25 guy 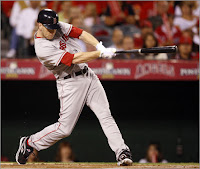 in on-base percentage. These are the places we used to see Manny Ramirez, and in his contract year Jason Bay is performing just like the slugger we used to have, oh and he comes to the ball park to play EVERY SINGLE DAY, without drama. With the lack of production from David Ortiz, their power slugging DH, it is Jason Bay who has picked up the pace to carry the Red Sox to a division lead. It's shocking to any Sox fan that without Big Papi being Big Papi and Manny no longer being a Red Sox, the Sox are still in the top 5 in total bases and homers among major league teams. Jason Bay is the outfielder Epstein and the front office have always wanted, as a fan, I vote for this form of a power hitting corner outfielder, less stress same results. (I also like when my corner outfielders are suspended for suspected PED use, that helps)

The 2009 Boston Red Sox may not have the best record in the majors, however as they've treated the New York Yankees this season . . . It's hard to argue they aren't embarrassing the pinstripes. Believe That.
Posted by Lynchy at Thursday, June 11, 2009