Boston College is on their way back to The Heights,victorious after their defensive battle in Winston-Salem on Saturday afternoon. The Maryland Terrapins are returning to their dorms after being beaten thoroughly in College Park by the visiting Seminoles. With the Terrapins loss, they have played their way out of the ACC title game on December 6th and with the Eagles win they are still alive for that same title. An Eagles win against the Terrapins this weekend will send them to Tampa Bay, a Terrapins victory launches Florida State straight to the ACC title game.

Now that you know the situation, we're six days away from an epic ACC showdown:(If I seem to be showing my rooting interest and extreme excitement for all things ACC football, deal with it.) Time to get you prepared:

1. The Boston College offense is in trouble. On BC's final possession of Saturday's game, the Eagles went on a 9 play, 78 yard drive resulting in the go ahead touchdown. Excluding that game winning drive, the Eagles had 65 plays for just 152 yards throughout the entire game. If your scoring at home, that's less than 3 yards per snap. The Boston College offense will be 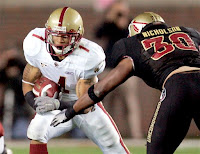 without 5th year senior, Chris Crane, who was knocked out of the game and the season with a broken collar bone on Saturday. An offense that scored a touchdown just once, in 15 possessions, will now be led by redshirt freshman quarterback, Dominique Davis. Davis' numbers weren't all that bad, despite the two turnovers that resulted in Demon Deacon touchdowns, the young quarterback went 13 of 23 and had 103 yards passing. With an inexperienced man under center, the Eagle offense will be forced to rely heavily on their freshman running backs, Josh Haden and Montel Harris. The freshman duo has rushed for over 1,000 yards and average nearly 5 yards a touch. Fortunately for the now young offense, the visiting Terrapin defense is ranked 58th against the rush (1,446) through last weekend and gave up another 172 yards on the ground this past Saturday to Florida State. On a more positive note, BC head coach Jeff Jagodzinski, has rarely asked his offense to go out and win the game for him, an offense ranked 55th in the country in scoring per game will do that to you.

2. How different does a landscape change in one week? Headed into week 11, the Florida State Seminoles were the top ranked team in the ACC Atlantic (#20), welcoming Boston College to their place and looking to take command. By days end, they were on the outside looking in. Boston College had taken their top ten defense into Tallahassee and knocked Florida State off in their backyard. At the start of week 12, the Maryland Terrapins were coming off a huge win against ACC rival and #16 ranked North Carolina, on a game winning field

goal. With Florida State falling to Boston College, Maryland took over as the ACC Atlantic's top ranked team(#22) and controlled their own destiny with those same Seminoles visiting College Park in the coming week. By Sunday night, the Terrapins had lost to the Seminoles and coupled with a Boston College victory over Wake Forest, have eliminated themselves from a shot at the ACC title. Which brings us right to week 13, the AP poll has the Boston College Eagles ranked as high as #20, and you guessed it, the ACC Atlantic's top ranked team. The Seminoles visit non-conference foe, Florida, in an in-state rivalry game and await the result of Maryland vs. Boston College. Maryland has been reduced to road block status, while Boston College plays to advance to the title game. Given the play of both Florida State and Maryland as top ranked ACC Atlantic teams, the odds may be stacked against our friends on Chestnut Hill.

3. A top 10 ranked defense, means more than you think. As unfortunate as an injury to your starting quarterback is, Boston College has the most prolific defense this side of the Mason-Dixon. Linebackers, Mike McLaughlin and Mark Herzlich, or as I'm dubbing them, Hawk & Animal (The Road Warriors a.k.a. The Legion of Doom) are as good as any two linebackers in college football, period. Herzlich and McLaughlin have combined for over 155 tackles on the season, 6 interceptions, 3 forced fumbles, and a partridge and a pear tree. If you hadn't watched any BC game this season, and just tuned into watch this past Saturdays at Wake Forest, you would have came away with one sentiment, Mark 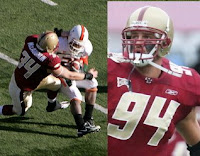 Herzlich changes the way an offense plays. He pressured Riley Skinner into bad plays, intercepted the 6,000 yard passer twice, and took one all the way back for six. By the way, his other interception led to a late first half field goal, proved to be the difference in the game. Now it isn't all just Hawk & Animal that make the BC defense, their interior lineman, tackles Ron Brace and B.J. Raji, are two of the fiercest DT's in the entire ACC. The Eagles 8th ranked defense gives up just under 280 yards of offense per game, they've yet to give up a 100 yard rushing game since the third week in October, and given their offensive struggles can account for two of their last three wins, ENTIRELY. Boston College is ranked within the top twenty in rushing yards allowed, passing yards allowed, yards allowed per game, yards per play, and total yards. The most telling stat, Boston College leads the entire country in interceptions on the season (23), led by senior strong safety, Paul Anderson and of course, junior linebacker, Mark Herzlich, who have five a piece. For a Maryland offense that hasn't scored more than 17 points in a game since late October, led by a quarterback who has thrown nearly as many interceptions as he has touchdowns, the Terrapins should be careful coming up North.

4. If Maryland can run the ball, be afraid. Now that you know about the vaunted Eagle defense, let me introduce you to someone you may not know, Maryland's top rusher, Da'Rel Scott. Scott is the second leading rusher in the Atlantic Coast Conference. He's rushed for close to 1,000 yards, averages 18-20 carries a game at five yards a clip. Scott has gone over the century mark four times this season, including two of the last three games against

conference rivals. In two of Boston College's three losses this season, they've lost after allowing opponents over 100 yards on the ground, including a 100+ yard game against Georgia Tech's Jonathan Dwyer, the ACC's leading rusher. However, more bad news for the Terrapins and Scott, in their last three road games, all conference showdowns, the Terrapins have had an anemic rushing attack. In a 23-13 loss against Virginia Tech in Blacksburgh, Scott ran the ball just 10 times for 11 yards. In a 31-0 loss to Virgnia on the road, Scott ran the ball, 11 carries for under 40 yards. Lastly, in a win over Clemson at Death Valley, Da'Rel averaged 1.7 yards a carry. If the 1-3 road Terrapins plan on blocking Boston College's second straight trip to the ACC title game, they better have some tricks up their sleeves.

The time is 3:30 Saturday afternoon, the place is Boston, Massachusetts. You know the story, you know what is at stake. Be there, because you know I will.
Posted by Lynchy at Sunday, November 23, 2008