Every year we discuss THAT team. The team that everyone thinks will be the NBA's darlings, the team that will run all the way to the title and be the underdog story the entire way. The truth is, that team doesn't exist, and rarely do they ever exist. Since the 1989-1990 season, won by the Detroit Pistons, only seven different cities have had championship parades. 19 NBA Finals since 1990, and only seven different

winners? So when it comes to the young Atlanta Hawks, led by Joe Johnson throwing down 28 a night and the veteran Mike Bibby averaging 13 points and 4 assist per game, the regular season will be kind to them; not the postseason. When we talk about the upstart Trailblazers and their often injured center; no chance, not yet. The Pistons are in the midst of both hacking up cap space and guaranteeing they won't go further than the Eastern Conference Finals, hats off. The Rockets have a big 1 and 1/2, McGrady is silly puddy in the playoffs, Artest is one middle finger to a rabid fan away from being suspended, and Yao is as soft as two-ply toilet paper. Finally, for you Jazz fans out there, it's nice to see you've replaced the Suns and Mavs as best teams to never win more than a scratch ticket. Bottom line, only five teams in the NBA have a shot at winning the championship:

Disclaimer: (We now have to stop calling it the world championship because as Spurs coach, and 4-time NBA champ Gregg Popovich, said "at no point in the postseason do we play Italy" well put Pop, well put.)

Boston Celtics i.e. the defending champs. They don't show the championship hangover that most teams do the year after. Pierce came back to Boston lighter, Leon Powe and Tony Allen have looked better, and Kevin Garnett could get amped for a Saturday morning rec league, nevermind the actual NBA regular season.

Cleveland Cavaliers Bron, Bron is back in 2009, and believe it or not, he looks better. Maybe it has something to do with the new gold medal wrapped around his neck, but I'm guessing he's playing for that monster, and when I say monster, I mean MONSTER contract he'll get when he moves to Brooklyn in 2010.

San Antonio Spurs Older, slower, and more injured than they've ever been, the Spurs still went deep in 2008. Popovich is a future hall of fame coach, Duncan is still tops in the NBA among big men, and with Tony Parker becoming the scorer that he has, the Spurs are still a contender, every year, no matter what.

Los Angeles Lakers Bynum is healthy, Odom is coming off the pine, and as expected the Lakers look as good as we thought they would. I remember when the Lakers were offering Kobe to the Bulls in exchange for Ben Gordon and Luol Deng, I'm

guessing Deng, Gordon, and Bynum wouldn't have been as formidable, just a guess though.

New Orleans Hornets This team is pretty damn good. Their well coached, level headed, and have the best point guard in the league, hands down. Chandler is their resident 20/10 guy, you know about Chris Paul, and David West is their banger who scores 20 a night. They have sharp shooters in Peja and Posey. While the Lakers and Spurs have won multiple, the Cavs have Lebron, and the Celts are coming off their first in a while, New Orleans may be the most viable city to join those other 7 cities to host parades in June. (and not that parade where co-eds flash you for beaded necklaces) KEEP IT REAL!!?!?!?!!?

Why everyday should be Saturday!

LSU v. Alabama A friend of mine, whose a rabid Tide fan (not the laundry detergent) quoted "If Saban is outside in Baton Rogue, don't worry about Obama's life, worry about his." Clearly football fans of the SEC aren't playing with a full deck, but the University of Alabama is. They've received a gift wrapped 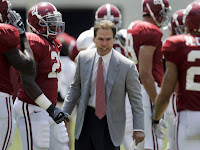 shot at the national title. They control their own destiny from here on out, win out and your in. Several things are possible here, Nick Saban becomes one of very few coaches to win a National Title at two different schools, the Crimson Tide cement themselves back into prominence among college football programs, and of course LSU fans dive off a cliff. Truth is, if not for Nick Saban, we aren't talking about Les Miles being a National Championship coach, if not for Nick Saban, LSU fans aren't cheering about much more than a calm hurricane season. Saban brought that program into national prominence, and now he's returning 'Bama to that same stage. KEEP IT REAL LSU!! Nick Saban is back in your lives, not in a good way.

On people being interested in Jake Peavy, I'm interested in Beyonce, it doesn't mean I have a shot. The Braves (who couldn't afford Texiera), the Cubs, who are again grasping at straws, and of course every American League team offering way to little to get the Padres to bite. You know who really should be 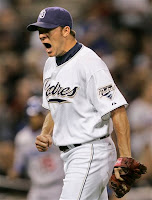 interested in Peavy? THE PADRES! Their season ticket holders pay excellent money I'm sure, and their offseason hype will be based around the three average big leaguers they get in return for their ace. The Dodger fan base look toward Manny, Red Sox toward the shortstop du jour, the Yankee fans toward their new digs, Phillies toward banner raising, and San Diego to a bunch of hyped up youngings. Sounds fun right? WRONG! Keep It Real!

So your Frank McCourt, and your about to make Manny Ramirez the second highest paid player in the game of baseball. I'm glad, because I for one, didn't want to see him in a Yankee uniform. The terms of the deal are something like this; Manny gets something close to $25 million per and an option for a third year, the Dodgers fans get to see one of the greatest sluggers for a couple seasons after watching their seat prices get jacked up, Frank McCourt's team becomes the Yankees West Coast, and in exchange for all that, The Devil gets the soul of Scott Boras. On the flip side, the entire world forgets that Cole Hamels arm just got done winning the Phillies a World Series, kind of like how the Red Sox rode the arm of ace, Josh Beckett to the Series in '07. When will baseball owners realize that an offensive arsenal gets you in the post season, AN ACE WINS YOU A RING! I say politely, KEEP IT REAL FRANK, paying C.C. would have been the wiser choice.

As for Red Sox hot stove: Insert a player, team, and import from a foreign land, then say the Red Sox are one of the six teams interested. In Theo I Trust.

A sad story: My main man Ryan Leaf has just left his job at West Texas A & M as quarterbacks coach. Amongst allegations that Leaf had approached a player on the

team about possibly getting him pills to heal a lingering injury from his football days. I'm really not being a wise ass on this one but . . . . he's Ryan Leaf, I mean shouldn't West Texas A & M have seen this one coming? Sure people change, yes they might mature, and of course he isn't on Pacman level but he does have a bit of a checkered past. I do wish Leaf the best in his future, I'm just not sure that West Texas A & M did a whole lot of homework bringing Leaf on board. To think, Peyton is headed to the hall and Leaf is headed to the unemployment line, of life. A real life tale of two.