Lets get right to it.

Boston College has the nations premier Catholic college football program, and it's time you admit it. Since the departure of Brady Quinn, (not a Weis recruit) Notre Dame has looked as bad as one can look. Eight wins in twenty-one games for the post-Quinn Fighting Irish, rumors of Coach Weis' job being in jeopardy swirling throughout South Bend, and supposed 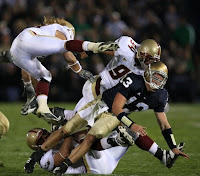 sensational sophomore quarterback Jimmy Clausen, has thrown 13 interceptions on the season, things are THAT bad. The Irish are an astounding 1-15 in their last 16 games against winning teams. Their record of 27-19 during the Weis regime is awful, considering his first two seasons, with Ty Willingham recruits, the Irish were 19-6. After Notre Dame was handed their six straight loss against the Eagles, a 17-0 shutout at Chestnut Hill, it has never been more evident that bad times loom over the Golden Dome. With Boston College spending time in the top 5 as recently as 2007 and their recent dominance over Notre Dame, I'm confident in saying the nations premier Catholic college football program resides in Newton, Massachusetts. KEEP IT REAL!

The Lakers are straight up, FILTHY. Following their most recent 7-point win at Western Conference powerhouse, New Orleans, the Lakers improved to 7-0 and remain the NBA's only undefeated team. With Lamar Odom, Jordan Farmar, and Trevor Ariza, the Lakers boast the NBA's deepest bench. Luke Walton who averaged nearly 24 minutes a game in 2007 can barely make his way off the pine with a deeper healthier 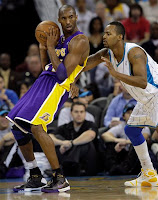 version of L.A. The most telling stat might be that of one Kobe Bryant, arguably the NBA's most dominant player, is on pace to average his fewest amount of minutes per game since his second year in the league and ppg is down on his career average, yet the Lakers still haven't lost. The addition of a healthy, 7 foot tall, 21 year-old center, Andrew Bynum, has given the Lakers the ability to move Pau Gasol to his natural position, where he's averaging 15 points and 10 boards a game. Lakers 2.0 have 8 of their 12 players averaging 20+ minutes per game and 5 players averaging 10 points or more per game. Their defensive efforts have yet to allow a 100 point game, including holding the Hornets and Rockets, two teams they'll surely see in the postseason, to under 90. In their second outing of the season, a 38-point win over the Clippers, Bryant led all Laker scoring with only 16 points. These Lakers are sharing the rock, playing defense, and taking prisoners. If you wanted a Lakers v. Celtics re-match, your on your way to it. KEEP IT REAL!

Buyer, beware of Matt Cassel. I like the fact that Matt Cassel threw the ball 51 times last night. I'm even impressed that he completed 30 passes for 400 yards, but I'm not ready to put him in Canton just yet. Call this your friday morning education; when a team is down 24-6 before halftime and has a list of 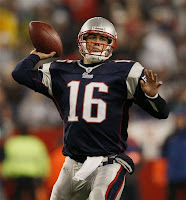 injured running backs, you've got limited options. What I'm trying to say is, YOU'VE GOT NO OTHER CHOICE BUT TO THROW THE BALL! Cassel made some excellent throws, his confidence has never been higher, and I applaud the young quarterback for that. BUT, if your an NFL team looking for a quarterback in 2009 Matt Cassel might not be as much of a lock as you think. Belicheat is a Hall of Fame coach, he's punched his ticket after reaching four Super Bowls and winning three, the Patriot offense is littered with veterans like Matt Light, Randy Moss, and Wes Welker, and their running backs gain quality yards, all these things factor into a team being able to come back down 24-6. When Randy Moss positions himself correctly on the sideline and hauls in a great catch, that isn't just Matt Cassel. When the tackles force pass rushers outside and the wideouts stretch the field resulting in a 15 yard run toward a first down, that isn't just Cassel. When the head coach constructs an offense built around what the quarterback can do, that to isn't just Cassel. So, I'm putting it out there . . .do not give this young quarterback $40 MILLION dollars. (unless he wins the Super Bowl, because then you pay the man.) KEEP IT REAL

See you next week, the only site that KEEPS IT REAL!
Posted by Lynchy at Friday, November 14, 2008